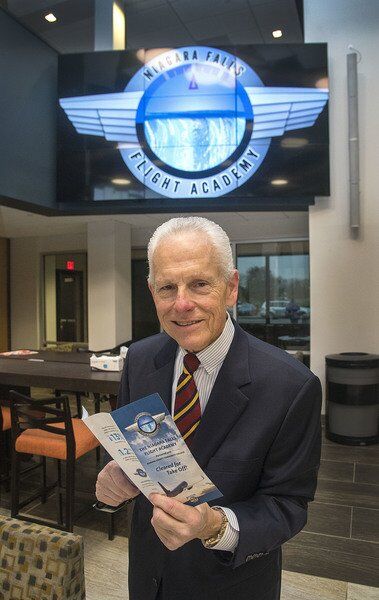 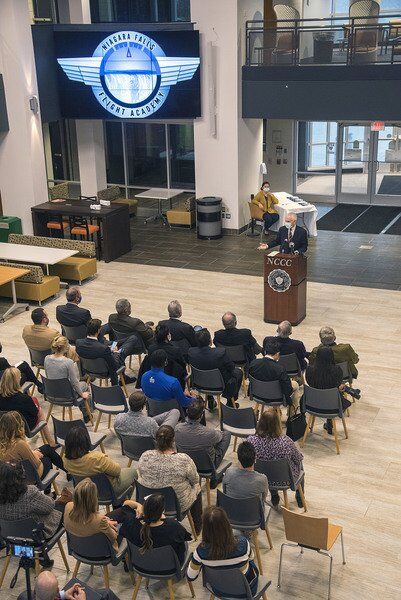 The Niagara Falls Flight Academy was discussed at a press conference held Wednesday at the Learning Commons of Niagara County Community College.

The Niagara Falls Flight Academy was discussed at a press conference held Wednesday at the Learning Commons of Niagara County Community College.

With a global aviator shortage remaining on the horizon, Niagara Falls and Niagara County are looking to fill the void and help produce the next generation of pilots, and, eventually, aircraft mechanics and technicians.

At a press conference held Wednesday at the Learning Commons of Niagara County Community College, the logo of the Niagara Falls Flight Academy lit up the large screen.

At the podium, the college’s President William J. Murabito said that NCCC is reimagining itself as a hub for workplace development in Niagara County and Western New York. Murabito added that, recognizing the pilot shortage, the institution “had been working for a few years to establish the program.”

The academy is owned and operated by local pilot and entrepreneur Joseph E. Wolfson, originally from Pittsburgh. Wolfson said the academy was his brainchild and that he originally started pitching it to the Niagara Frontier Transportation Authority 10-years ago, before the pilot shortage reached critical mass.

Now, Wolfson said, is the time to move forward. The Vietnam-era veteran pointed to studies projecting a shortage of one million pilots over the next two decades in North America alone.

Wolfson also outlined several discussions he’s had with airlines to solidify support for the academy, and pointed to the need to get young people engaged in the right types of study at an early enough age to put them on the path to pilot.

“It goes perfect with our career academy program for junior and seniors,” he said.

He said the school’s program could act as a feeder for the academy and that he was looking to bring more college credit-bearing courses into Niagara Falls High School.

Murabito said the eventual goal is graduating 50 pilots per year, who would gain a commercial airline pilot’s license through the Niagara Falls Flight Academy as well as an Associates Degree from NCCC, and would draw additional attention from the airline industry.

“I am excited about this opportunity for Western New York and Niagara County,” Murabito said. “We have a world class airport and a history in aviation, this will allow us to create a place to train pilots.”

He also pointed to the capacity to train for unique weather conditions here.

“Niagara Falls Flight Academy will have the only training program of this type in a 200-mile radius, said Wilson.

Robert Sugarman, a director with Stavatti Aerospace, with a local facility on Porter Road in Niagara Falls, is also bullish on the academy. He said, “one of the things about Niagara County and Western New York is that there is a tremendous aerospace legacy.”

According to a brochure, the plan is to open the academy in fall of 2022. Murabito said, he hopes to the hope is to have the first graduating class by 2024 but acknowledges the plan is ambitious.