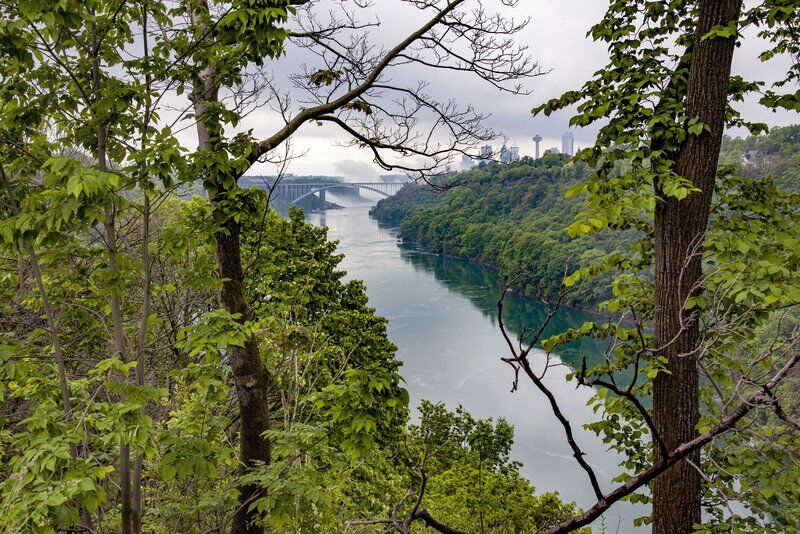 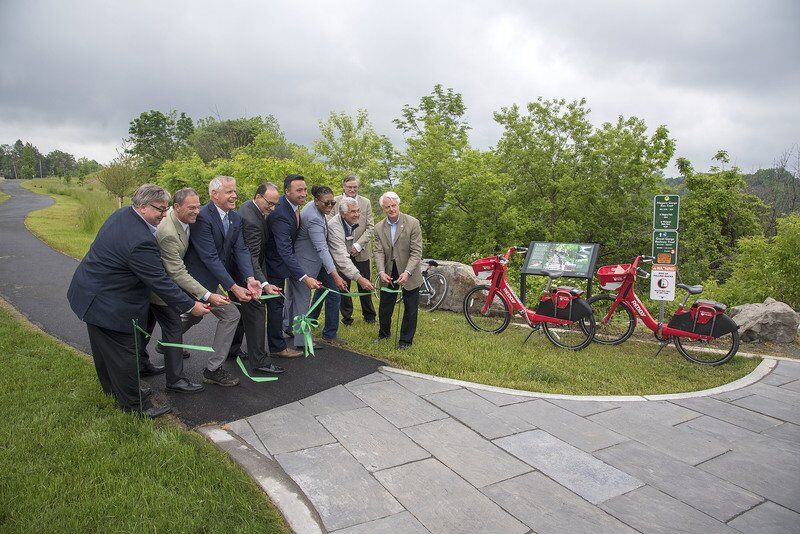 Dignitaries gathered at Freedom Plaza next to the Whirlpool bridge to formally open the Gorgeview section of Niagara Falls State Park on Thursday. Gorgeview is an old section of the Niagara Scenic Parkway. (James Neiss / staff photographer)

Dignitaries gathered at Freedom Plaza next to the Whirlpool bridge to formally open the Gorgeview section of Niagara Falls State Park on Thursday. Gorgeview is an old section of the Niagara Scenic Parkway. (James Neiss / staff photographer)

NIAGARA FALLS — Andrew Giarrizzo was supposed to be retired after a distinguished career as a landscape architect. Instead, he returned  Thursday to celebrate the opening of the Gorgeview Trail, the bike and nature path that stretches from near the Rainbow Bridge to Findlay Avenue.

It wasn’t the first time he showed up in retirement, either. Last year, soon into retirement, he volunteered to spread wildflower seeds purchased by the state near the Discovery Center and the Aquarium of Niagara. He just wanted to be sure the area was sufficiently seeded.

The victory dance, however, belonged to people like Giarrizzo, who said “parks have started to embrace the idea that it’s OK for it not to be mowed. People want to see birds and animals, butterflies and flowers. I am thrilled state parks is taking the lead on this kind of development.”

Giarrizzo started years ago on the Riverside section of path along the upper river near the Grand Island Bridge.

“I said Gorgeview was my retirement project,” he said. “I worked on Riverside and it showed us how to do Gorgeview.”

Lisa Vitello was another worker bee there to celebrate the halfway mark in the project to remove the parkway Robert Moses designed to seal the city off from the Niagara River. She was there in the beginning with Bob Baxter, Paul Dyster (before he was mayor) and others.

“Somewhere in the basement I still have the petitions,” Vitello said while laughing and proudly wearing a 20-year-old “Total Removal” button she saved from the beginning of a long journey.

“It’s very gratifying and exciting to see people coming from out of town with bicycles on their cars,” Dyster said, “but it is even better to see people who live in the city seeing what is here. It makes it a more desirable place to live.”

Restaino sang Dyster’s praise from the podium, noting the project was well under way with multiple agencies cooperating for the benefit of Niagara Falls even before his election.

“I have to tell you I received a gift from my predecessor,” Restaino said. “Paul Dyster did the work. There’s a lot of us who have been here our whole life and are seeing a different experience.”

Mistretta, Kulleseid and some staff on Wednesday rode bicycles from Niagara Falls to Fort Niagara. They staged a van for the ride back.

The two-mile long new path cost almost $50 million and adds about 140 acres to the park, the largest expansion of the park since 1885.

Vilardo said years ago, when he had an apartment on Main Street, his then-girlfriend, an avid runner, was visiting and invited him to join her. They crossed four lanes of Whirlpool Street and two active lanes of the Robert Moses Parkway to get to two abandoned lanes for a run. It was a nightmare.

That girlfriend is his wife now and last weekend they took a drive from their home in DeVeaux to check out the new parkway with their daughters.

Frank Cirillo, the DOT regional director, gave his prepared remarks about the cooperative efforts of every government agency involved but also told a story about the far reach and power of the city’s brand.

“I was in Boston to visit my daughter when I stopped at a CVS for toothpaste. The clerk asked if we have one of those discount cards and looked it up by phone number,” he said. “‘716’ she asked, ‘where’s that?’ I told her Buffalo. She said ‘like near Niagara Falls? I am going to visit there this summer.’ I said check out the new park. She had no idea who I was or how I was involved but the word is getting out.”

As the crowd from the press conference began to dwindle, Nancy Smith, executive director of the Western New York Land Conservancy, looked around in wonder at how the state’s project has meshed with “Restore the Gorge,” her organization’s effort to bring native flora back to the banks of the river.

Ring billed gulls flew overhead. A turkey vulture wobbled lazily on the wind. A catbird whined from the bushes and Giarrizzo took it all in, pointing out columbine and cranberry viburnum blooming at the top of the adjacent stairs heading into the gorge.

“I’ve been riding this while they were building,” she said, “checking out the construction and enjoying not riding over the overpass.”

Mistretta said the state is in the early phases of designing the next portion of the project, north to Lewiston, but no funding has been identified.