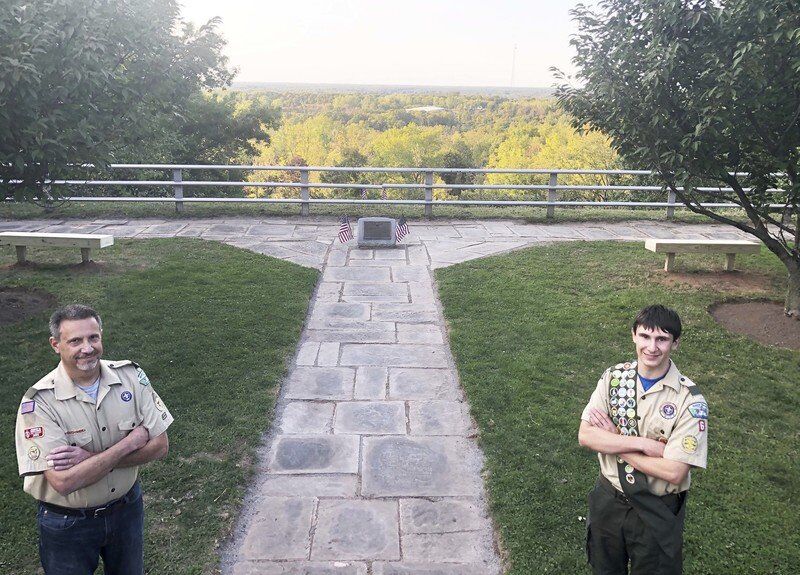 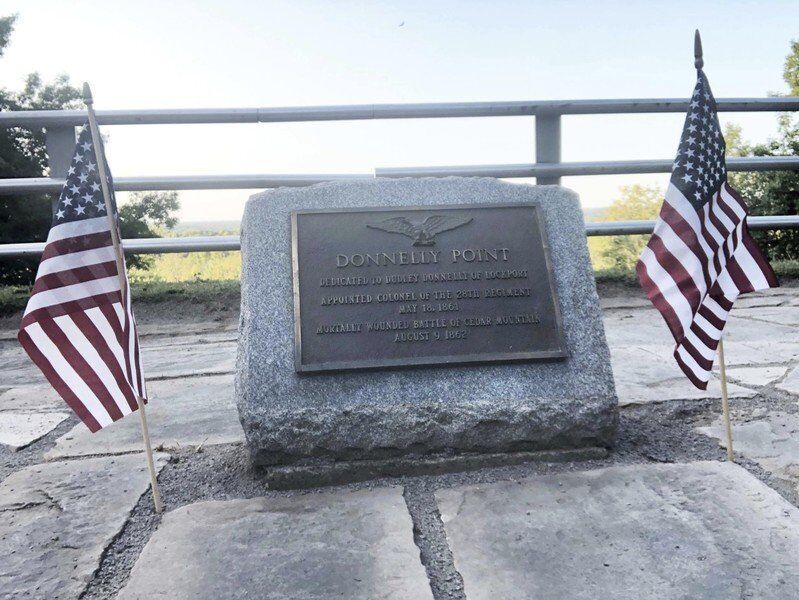 JOHN D'ONOFRIO/STAFFThe monument at Donnelly Point for Lockport's Dudley Donnelly, who lost his life in the American Civil War.

JOHN D'ONOFRIO/STAFFThe monument at Donnelly Point for Lockport's Dudley Donnelly, who lost his life in the American Civil War.

The world's simply a more beautiful place to live today, thanks to the efforts of a Lockport High School senior.

Having visited and played there throughout his life growing up, Erik Artieri, 17, an Eagle Scout with Boy Scout Troop 6 of Lockport, decided he wanted to improve the area around Donnelly Point at Outwater Park for his Eagle Project.

With permission and encouragement from city officials — and a little help from his friends, family, as well as his troop leader dad, Jeff Artieri, and generous sponsors and Outwater neighbors — Erik went to work last week transforming the Lockport landmark.

“One of the first things we did is we took shovels and scraped all the grass in between the rocks on the sidewalk,” said Erik, the son of Jeff and Denise Artieri of Stevens Street.

“After that, we got working on the benches and set those in. There were some stones that were uneven on the sidewalk, so we dug those up and pulled some out and re-leveled them.”

Besides cleaning, sweeping, weeding, leveling and trimming the sidewalk area leading up to the overlook, as well as the grass area and trees around it, Erik went as far as trimming areas adjacent to Donnelly Point and he even constructed two benches, giving visitors a place to sit and take in the view.

The reactions were great,” Erik said. “People were coming by and giving us a thumbs up, or saying, ‘It looks great,’ or ‘It looks like it did 50 years ago.’ One of the neighbors got out his weed whacker and started going around the edges.”

Erik's father said Eagle projects must be completed before a Scout turns 18.

“The Eagle project is something a Boy Scout has to do — one project — within their community. It could be something to help someone in particular or it could be for the community, like we did here,” said Jeff Artieri, troop leader for Boy Scout Troop 6 at Emmanuel Methodist Church at the corner of East Avenue and Washburn Street.

“He has to organize it, if there's money to be raised, he has to come up with a fundraiser and send letters out for donations. We then sit down and review it and then it has to go to the (Iroquois Trail Council headquarters) in Batavia for review,” Jeff said.

“We did work on the Bell Tower monument at Outwater Park a few years ago and after walking the park one day, he came up with this idea. We talked to alderman Mark Devine, who liked the idea, but then COVID hit. The Common Council went ahead and approved the project and the boy scout committee okayed it and we wanted to get it done before anything happens again with the COVID.”

Besides good neighbors, Erik wished to thank everyone for their help and support, including his parents and uncles, his grandparents, Greg Zakrzewski of Aslyn Plumbing, who donated trucks and stone, Phil Zakrzewski of Millwork 2000, Inc., who helped with fundraising, David Sparks and Sparks Custom Homes for lumber and concrete for the benches, Kevin Clark for his life-long inspiration, and Ross Rental Station for saws and the fuel to run them.

The results, just like the view of Toronto on Monday and on any clear day, are simply spectacular, and everyone, including Mayor Michelle Roman, is impressed and appreciative.

“The efforts of the Boys Scouts, specially the Eagle Scouts who dedicate their service to the city's green spaces, like Outwater Park and the lookout, are vital in improving the quality of life for the entire community,” Mayor Roman said.

A member of the LHS boys swim and tennis teams at LHS, Erik plans to study criminal justice next fall at Hilbert College. Jeff and Denise Artieri are the parents of two children, Erik, and his older sister, Gina.