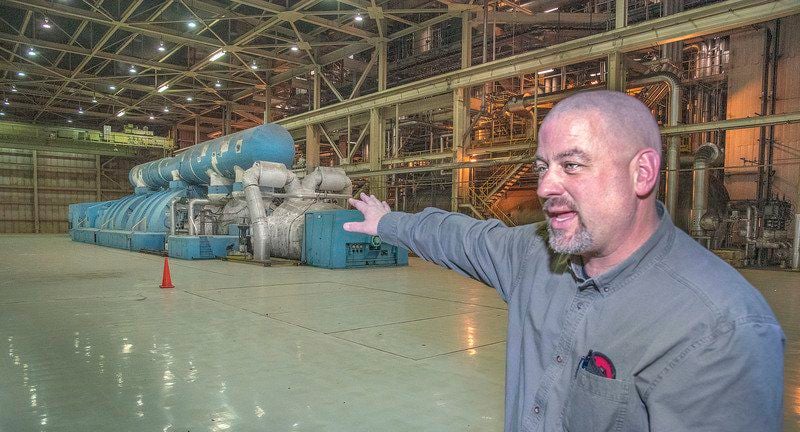 James Neiss/staff photographerBrian Gregson, plant manager of Somerset Generation Station, points out features of the station's main generator during a March 5 tour of the plant and grounds. The station is now retired and the owner, Heorot Power LLC, is aiming to sell some of its equipment. 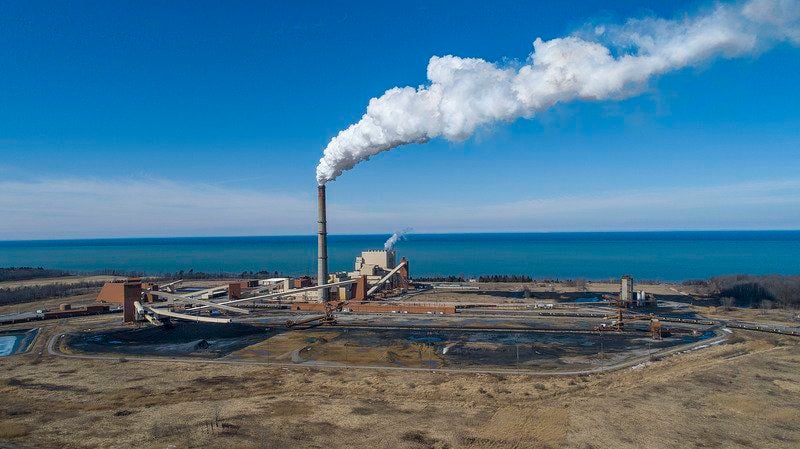 James Neiss/staff photographerAerial view of Somerset Generation Station on March 5, 2020. The last remaining coal-fired electric generating station in New York made power for the last time on March 13 and was officially retired on March 31.

James Neiss/staff photographerBrian Gregson, plant manager of Somerset Generation Station, points out features of the station's main generator during a March 5 tour of the plant and grounds. The station is now retired and the owner, Heorot Power LLC, is aiming to sell some of its equipment.

James Neiss/staff photographerAerial view of Somerset Generation Station on March 5, 2020. The last remaining coal-fired electric generating station in New York made power for the last time on March 13 and was officially retired on March 31.

BARKER — While awaiting the all-clear to finish closing the last coal-fired electric generating station in New York state, managers of Somerset Operating Company are optimistic about the property's chances for reinvention as a large energy user.

The 625-foot-tall stack at the sprawling Lake Road station puffed its last cloud of steam on March 13, signifying the end of power generation there, and the plant was officially retired on March 31.

For 52 full-time employees, next comes decommissioning, a roughly six-month process involving remediation of the coal yard, cleaning out water collection basins, draining, cleaning and disconnecting tanks and having them removed from the state’s chemical bulk storage registry, and capping the plant’s on-site landfill.

Decommissioning presently is on hold due to the pandemic. Forty hourly wage earners were furloughed days after the end of generation, in keeping with Governor Andrew Cuomo’s orders directing non-essential businesses to shut down. Most salaried employees are working from home. All employees are awaiting callback to the plant to perform the last of their duties.

Once decommissioning is done, plant manager Brian Gregson said, “empty buildings are all that will be left.”

Employees were already told their pink slips would come in two waves, one in late May and the other in the fall, when decommissioning is complete.

The mood at the station had been downcast ever since the owner, Heorot Power LLC, filed its request to deactivate Somerset Generation Station with New York Independent System Operator, the manager of New York’s power grid, in mid November. The request stated a combination of factors, “deteriorating” market conditions and newly adopted carbon dioxide emission limits, made the plant’s continued operation impossible.

Over the past few years, the station with generating capacity of 675 megawatts was offline many more days than not — a reflection of its inability to compete, price-wise, with other fuel sources, mainly natural gas — but whether it was producing or not, the work of monitoring and maintaining the plant originally named Kintigh Station remained.

Now, the work is all about winding down.

“The mood is somber, but these people are very professional,” Gregson said. “This staff will rally to the cause for sure.”

Somerset station was cleared by NYISO to stop generation on or after March 12. NYISO had determined, in consultation with other producers including National Grid, NYSEG and New York Power Authority, that Somerset ceasing to feed the grid would have no impact on grid “reliability” through the year 2025.

Anticipating such a finding, about a year ago Heorot Power’s owner, the holding company Beowulf Energy LLC, started putting out feelers about the possible development of data centers at both Somerset and the site of its now-retired Cayuga Generation Station in Tompkins County. The pitch for Empire State Data Hub, data centers built on the properties that held the last two coal-fired generating stations in the state, went public in mid 2019.

In Somerset, Gregson said, “the company does not want to just walk away from this plant, leaving it to rust. We don’t want this to be a dead asset. If we can’t generate power here, let’s do something else to support the community.”

Heorot Power’s $650 million development proposal calls for a 500 megawatt data center at Somerset and a 100 megawatt center at Cayuga, both newly constructed on the power plants’ grounds, beginning this year. The existing power plants will not be retrofitted or demolished.

A business plan that proposes to transform energy makers to energy consumers may seem odd, even ironic, to some. To Heorot Power, it’s just logical.

“We have a connection to the grid. There’s no market to put energy out, so let’s bring in a high-energy user. The infrastructure is already here,” Gregson said. “We believe while it’s a slightly different business … it’s a good option for our business plan going forward.”

The bulk of the company’s investment in the Empire State Data Hub, $550 million, would be sunk into the Somerset center, generating an estimated 500 construction jobs and 160 full-time jobs paying an average salary in the $40,000 to $60,000 range.

To get the data hub off the ground, the company is seeking a 125 megawatt allocation from the power authority and an estimated $65 million of additional supports from Empire State Development.

The search for support is going well, according to Gregson and Michael Enright, managing director of Beowulf Energy LLC.

Last July, NYPA approved a 10 megawatt allocation of low-cost hydropower for the Somerset data center (as well as a 2 megawatt allocation for Cayuga). While news reports tended to characterize the grant as a mere fraction of what the company is seeking, 10 megawatts is a significant award, upwards of 10 times more than a business typically receives, Gregson observed.

Since then, Enright said, the company has remained in talks with NYPA for an additional 90 megawatts for Somerset through other programs. In mid March, he told the Union-Sun & Journal, “the discussions are ongoing and promising” and he was hopeful of seeing a “path forward” on the request within 45 days. Whether and how the pandemic might affect the development timetable, he was not sure.

With agents of Empire State Development, Enright said, the company has been discussing job creation and interconnection assistance. Securing blocs of power to run the data centers is most important, though.

“Then other things will follow,” he said. “All the entities have been working with us and we’re optimistic.”

Technically separate of the Empire State Data Hub, but in support of it, Heorot Power is pursuing development of solar farms on its Somerset and Cayuga station grounds. In Somerset, it’s exploring startup of an up-to 70 megawatt farm on a portion of the 1,800-acre lakefront parcel.

Heorot Power has already bid several times, unsuccessfully, for funding from the state Energy Research and Development Authority to site a utility-scale solar farm at Somerset station. This time it's talking with private investors, according to Enright.

Solar power generation is an expensive endeavor in upstate New York, energy executives say. The availability of cheap natural gas makes even subsidized solar less competitive in the open market, Gregson said; and in New York, Renewable Energy Credit pricing has been flat, meaning the price a generator gets paid to produce “clean” energy is fixed rather than tied to production cost, Enright said.

If the state allowed indexed REC pricing, that is, pricing that moves up and down depending on generating costs, “That would be very helpful,” Enright said. “There are places where (solar utility) siting could happen quickly but REC costs don’t allow it. A moving REC price that reflects energy costs could make a Somerset farm more attractive” financially.

EULOGY FOR KING COAL: The senseless shuttering of Somerset station

BARKER — It’s taken 20 years, but the day of reckoning is at hand. The last and largest coal…