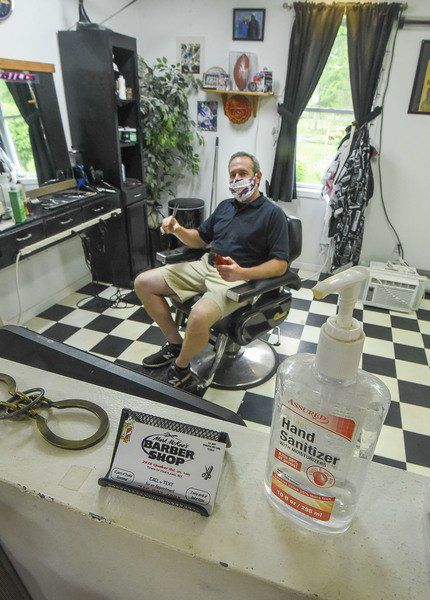 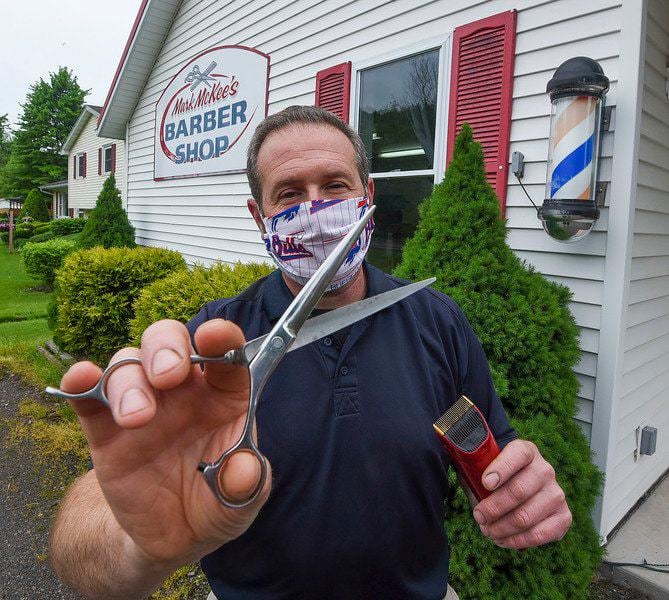 James Neiss/staff photographerBarber Mark of Mark McKee's Barber Shop at 2918 Quaker Road in Gasport is preparing to open according to the rules set by New York state during the pandemic.

James Neiss/staff photographerBarber Mark of Mark McKee's Barber Shop at 2918 Quaker Road in Gasport is preparing to open according to the rules set by New York state during the pandemic.

"People have been waiting a long time."

These are the words of Mark McKee, owner of Mark McKee's Barber Shop on Quaker Road in Gasport. The reopening of Western New York is now in its next stage, Phase II. This includes opening for offices, real estate, in-store retail, automobile sales and repair, cleaning services, commercial building management and barbershops and salons.

The road to reopening has not been easy for many in the barbering profession, McKee said. Because many barbers, including himself, are sole-proprietors, they do not usually employ anyone else and are ineligible for the aid other businesses can receive. For himself,, McKee said he received two $600 checks from the CARES Act with unemployment. While he's not ungrateful, he said the unemployment was not coming through for this region. In short, it's been a long time to wait since March 21.

"Everybody's anxious," Mark said of the shutdown, and explained he's been receiving calls and texts for haircuts and hasn't been able to put a schedule down in stone. "If one day more goes by before the reopening, I'd have to rearrange everything."

McKee said he can usually do 14 to 18 haircuts in a day, and hopes to shave off a few minutes by not offering speciality features like beards, a service he often provided for his clientele.

"Just for the first three or four weeks," he said. "I'm going to get as many people as possible."

Not used to inactivity, McKee said he's kept busy during the shutdown.

"I've accomplished a lot of things I haven't gotten to in years," he said. Along with a new sign, he's cleaned up his workshop a bit, and made it more safe by setting up chairs outside and limiting the amount of people inside. It's important to stay safe, he said, and feels like he has to be responsible.

"A lot of elderly guys get their hair cut here," McKee said.

Other businesses in the area are also glad to be reopening. Ron Slaby of Kirk Starkweather said he's now able to open up his lumberyard in Newfane.

"We do post-frame buildings and we also have a lumberyard," he said. "Construction was allowed to open on Phase One. We had done one job during the real pause of it because it was an essential job for a company making hand sanitizer. Then, of course, in Phase 1 we started working in earnest. ... I think things are coming back faster than what we first anticipated."

In Wilson, Rob Mucha of Afishionado Sportsfishing said the shutdown has taken a financial toll on locals, as well as, visitors who would often come to charter fish. The charter boat business, which often picks up trout and salmon, has sets of loyal customers, many of whom may very well come back as fears get overcome by a desire to enjoy the summer.

"I think business will probably be OK," he said. "If it's open and people are willing to wear their face-masks, I think everybody is dying and itching to do something. So, if it's legal to do it, let's do it."

Another business in Wilson, Dee's Bungalow also hopes to win back their cancelled stays at their cottage in Olcott.

"Any bookings that we had for March and April, and half-way through May immediately canceled," Dee Wolleyhan, owner of the rental business. "People weren't gong to travel, we usually have the fishermen in the springtime, so, we lost a lot of bookings, and then as soon as Phase One started to happen, people started to call and started booking from that point on. But it affected us greatly."