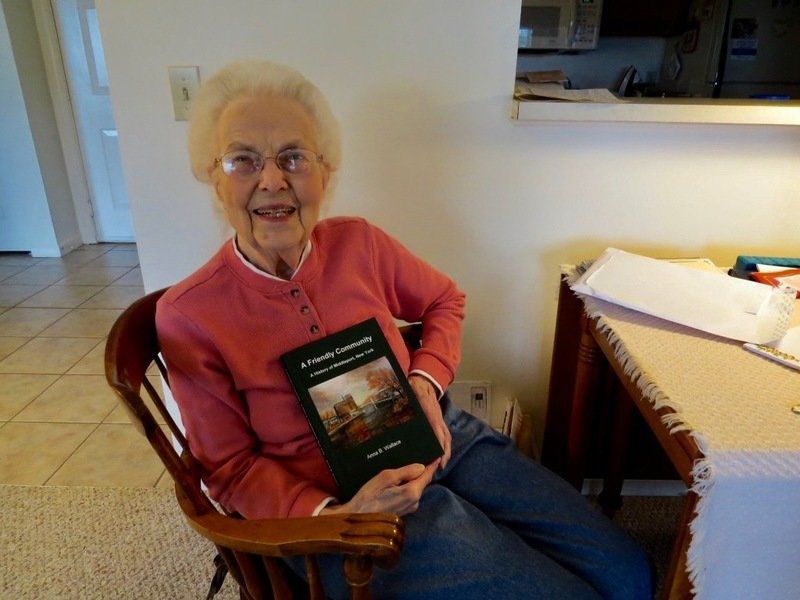 FILE PHOTOAnna Wallace, retired Middleport village historian, displays a copy of her book "A Friendly Community," a history of Middleport published in 2016. 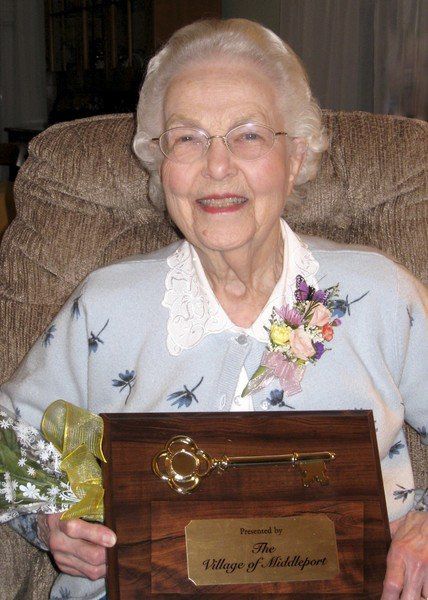 CONTRIBUTEDAnna Wallace was presented with the key to the Village of Middleport upon her retirement as the village historian in 2010.

FILE PHOTOAnna Wallace, retired Middleport village historian, displays a copy of her book "A Friendly Community," a history of Middleport published in 2016.

CONTRIBUTEDAnna Wallace was presented with the key to the Village of Middleport upon her retirement as the village historian in 2010.

MIDDLEPORT — Anna Wallace died at the age of 99 with a life behind her that only a member of her generation could have. Wallace gave 100% to her job, knew to stop and smell the roses, and understood each action undertaken today was making history tomorrow.

In 2010, Wallace was awarded the key to the Village of Middleport after retiring from the village historian's post, which she had filled for 30 years.

Born in 1920, Wallace resided in Middleport as the wife of an undertaker and a mother to their children. She was appointed the village historian in 1980.

Wallace had kept a manuscript in the historian's office, “A Friendly Community,” the title taken from a quote by Teddy Roosevelt, who once passed through Middleport and was impressed by it. Lutz spearheaded the effort to get the manuscript published about five years ago.

“She had this manuscript she had put together, starting with her recollections and what she had learned from her time as historian. She starts in about the 1800s and goes to the present,” Lutz said. “That was one of the things I wrestled with because she had stopped writing anything before 2010. Her husband became ill and she (didn't) write much more.

"People had asked me to update it, because by this time it was 2015 and some of the things were outdated, but I didn’t want to do that," Lutz said. "The book was Anna’s voice and written in her voice and her thoughts and I thought, 'If I tinker with it, it’s not hers anymore.’ ... I didn’t want to add my voice because it’s different.”

Wallace's manuscript was published as a soft cover book in 2016. Lutz ordered 100 copies and within one week they were sold out, she recalled. Eventually 400 copies of "A Friendly Community" were purchased locally and many more have been ordered through Amazon.

“She deserved that, I think, for all the work she put into it,” Lutz said. “I couldn’t just leave it without it being finished.”

Fomer mayor Julia Maedl recalls that Wallace had a certain propriety about her, perhaps because she was the funeral director’s wife and loved taking care of the history of the village.

“She was very meticulous and very thoughtful in every way, especially with the history of Middleport,” Maedl said. “She was very kind.”

Maedl and Wallace shared the same church, Middleport United Methodist, and, as it turned out, the same birthday: November 23.

“Whenever we got together, it was the two Saggitarians. We had so much in common,” Maedl said. “Anna was from the generation that when you asked them to do a job, they put in 100% or more, because they took that at heart and always did their best. She had the gift to love history and what was going on and the record taking. That was kind of her niche. ... We were blessed to have her for so many years.”