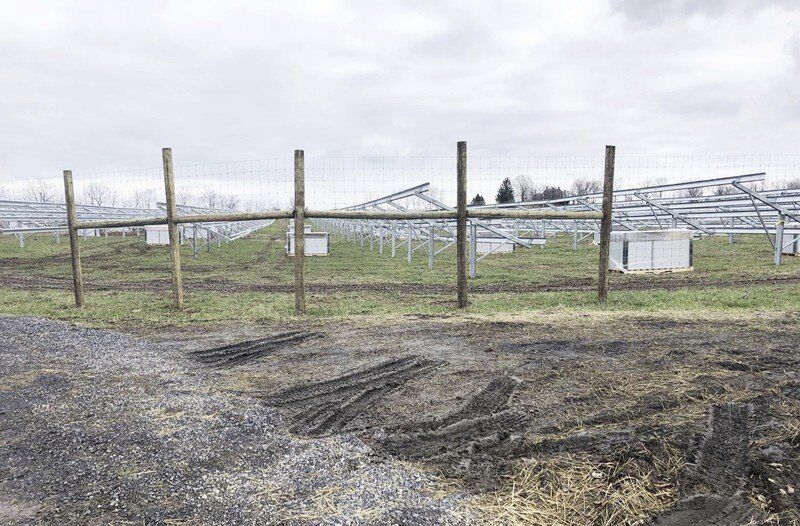 Agricultural-style fencing like this, with the addition of two rows of 8-foot-tall cedar trees in front of it, will surround the proposed town solar farm near Slayton-Settlement Road. (Contributed photo) 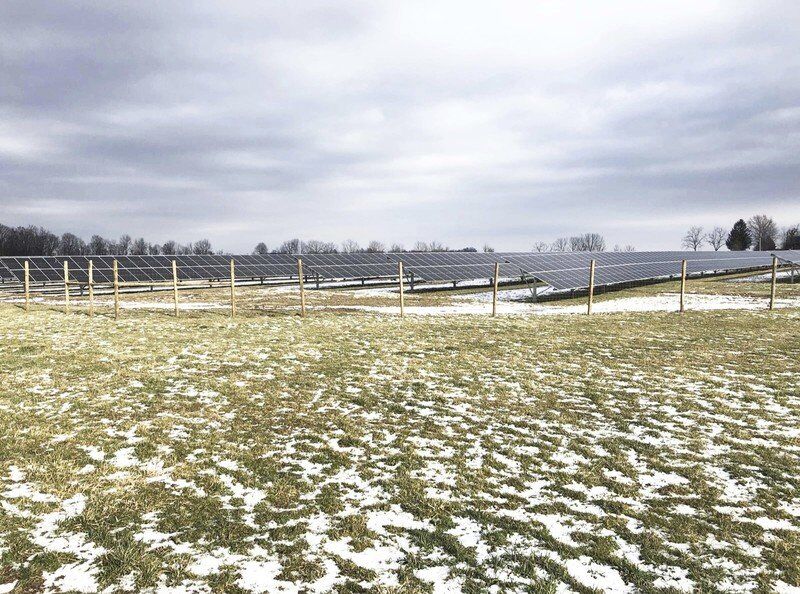 Renewable Properties' vision of their proposed 46-acre town solar farm in the Town of Lockport differs from that of local residents who oppose it. (Contributed photo)

Agricultural-style fencing like this, with the addition of two rows of 8-foot-tall cedar trees in front of it, will surround the proposed town solar farm near Slayton-Settlement Road. (Contributed photo)

Renewable Properties' vision of their proposed 46-acre town solar farm in the Town of Lockport differs from that of local residents who oppose it. (Contributed photo)

That's the goal of Renewable Properties, which is seeking a special use permit and site approval to build a 7-megawatt utility solar farm on 46 acres of land zoned residential-agricultural in the Town of Lockport.

In response to concerns from residents living around the proposed project site between Day, Slayton-Settlement, Harrington and Canal roads, project manager Brian Madigan said RP will host a special “public forum” at 6 p.m. on Wednesday, May 12, at the Wrights Corners Fire Company on Lake Avenue.

Madigan said two rows of Eastern Red Cedars will be planted around the project site — the former Kowalski family farm — and they are expected to be 8 feet tall at the time of their planting.

In addition, Madigan said the fence will leave a 2-inch open area at the base so some “critters” can continue to have access to the property and can migrate.

The expected “noise” to be generated from the solar farm for neighbors is equivalent to someone whispering to you from five feet away, he said.

“We're expecting about 69 decibels of sound to come out of this,” Madigan said. “That's equivalent to a normal conversation in a busy room or a refrigerator. When you add in the distance of the nearest homes, which are at least 500 feet away, it's really inaudible. You add the staggered row of trees around it and I don't think anyone will hear much of anything.”

As far as potential fire, Madigan said the risk for fire at the solar farm would be no greater than at any other facility. No special firefighting equipment is required, he said, adding that local fire departments would be provided with pass key codes to access to the property in case of an emergency. Materials on the solar farm are non-toxic, consisting mainly of aluminum, steel-driven posts, tempered glass, common plastics and silicon semi conductors, he said.

“The solar project is a more benign use than what's currently there from dairy operations,” Madigan said.

“Those cows are out here defecating and adding potential pollutants to the area. If this project goes through, that will cease. And no portion of our project is located within a wetland boundary. We were very careful in our approach and design to avoid sensitive resources. We want to be stewards of the environment as well.”

Among other points Madigan said he wanted to make was the project does not fall within the federal Erie Canal District. Funds will be set aside, he added, throughout the life of the proposed solar farm, as part of a decommissioning plan that will ensure the property is returned to a usable form once the solar project is no longer viable or closes down.

In response to access roads being constructed in areas local residents feel will make vehicular traffic more dangerous, Madigan said heavy trucks will only be “coming in and out” of the project site for about two months. After that, RP expects to make only about a half dozen visits to the site each year, he said.

“The Planning Board gets a proposal and if it meets all the zoning requirements and state environmental rules, then they'll consider the project,” Crocker said.

“Right now, I'm an observer just like the public and I've attended both public hearings we've had on this so far. I plan to attend the forum next month as well. It would be in appropriate for me to express an opinion on it until the Planning Board reaches its decision.”