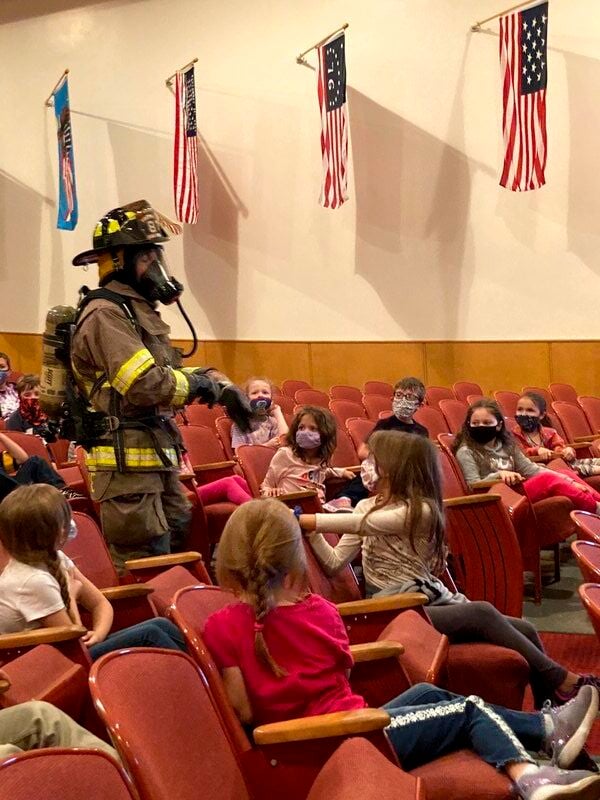 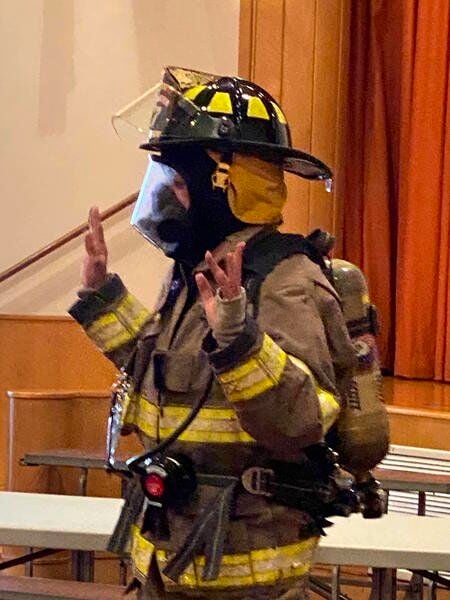 GASPORT — Oct. 4-10 was Fire Prevention Week and traditionally, for Royalton Hartland Elementary School, that has meant students would be treated to a presentation in the auditorium. This year, because of Covid-related social distancing requirements, it appeared that might not be possible.

Elementary Principal Donna VanSlyke didn't see it that way, though.

The 20-year volunteer firefighter, who serves with the Bergen company in Genesee County, took it upon herself to give 10 small assemblies, one for each cohort in each grade, throughout the week.

“She’s put so much into making sure everything run smoothly and safely,” music teacher Kathy Pease observed. “Just having an administrator being a firefighter person, you don’t expect your principal to have a life like that.”

According to VanSlyke, the usual presentation involves fire trucks coming to the school so that students can see the trucks and firefighters, and firefighters peeling off their layers of equipment to reveal that under all the masks and gear are real people. That wasn't possible this year, she said.

“Chief Wesolek informed me that it would be tough for them to do it at the school ... because of the whole Covid situation and us not allowing visitors into our building,” she said.

Instead, volunteers from Gasport Chemical Hose Co. put together a video showcasing the life of a firefighter by talking about what it is that firefighters do.

The theme of Fire Prevention Week 2020 was “Serve up Fire Safety in the Kitchen.” VanSlyke found a video online to show to the students, who had "great questions" after watching it and as they talked about how to be safe.

VanSlyke said the core lesson that she wanted to impart to students was that firefighters may be people they know and they're not to be feared.

“I decided to bring all my gear in and actually show them that there is a real person underneath, that it might be somebody they know,” VanSlyke said. “What I did was, I put each layer on. I talked about each layer; what bunkers are, turnout coat, the helmet. We put the air pack on, put the mask on and showed them, they can’t see it’s me, but it is me… . The whole message there was: I don’t want you to be afraid, the firemen are there to help you. They come in, you need to make sure they know you’re there.”

According to Pease, the RHES principal is good at tailoring messages to small groups. She said VanSlyke got small groups of parents together, at the beginning of the school year, to learn about the technology that their children will be using during this very unique school year.

Noting that October is National Principals Month, Pease said Van Slyke has a lot of "energy," which makes working with her a good experience.

“She’s really gone above and beyond,” Pease said.