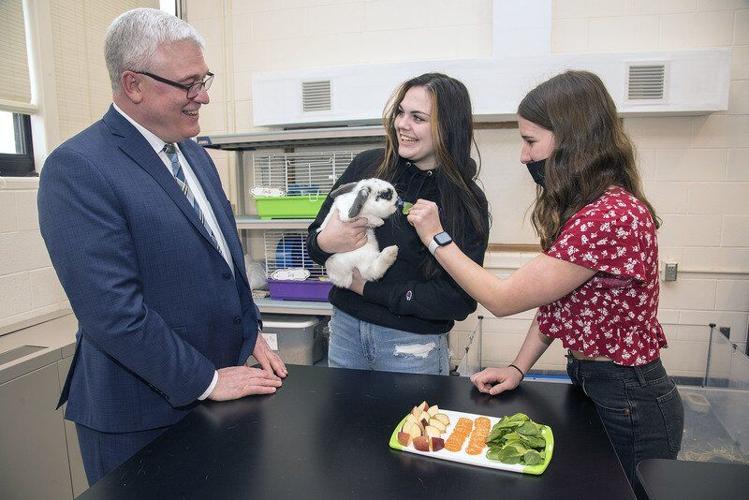 Royalton-Hartland Central School Superintendent Hank Stopinski gets a tour of the new Animal Science Lab from 11th-grader Alex Stern, 16, who is showing off Olly, a Holland lop and 10th-grader Sophia Santella, 15. The Roy-Hart School District showed off the new agricultural lab on Wednesday. 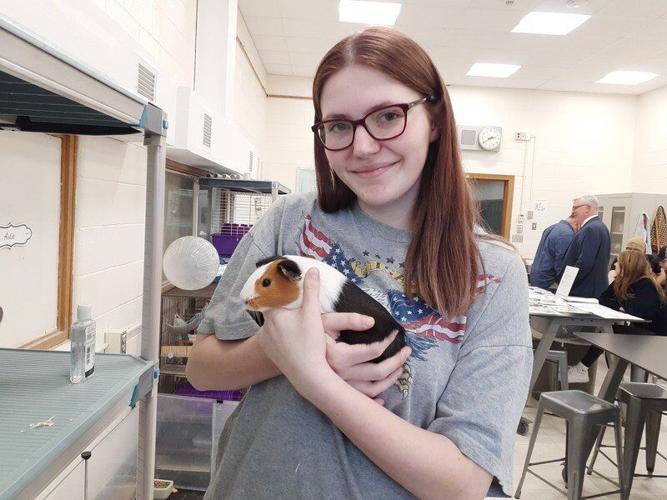 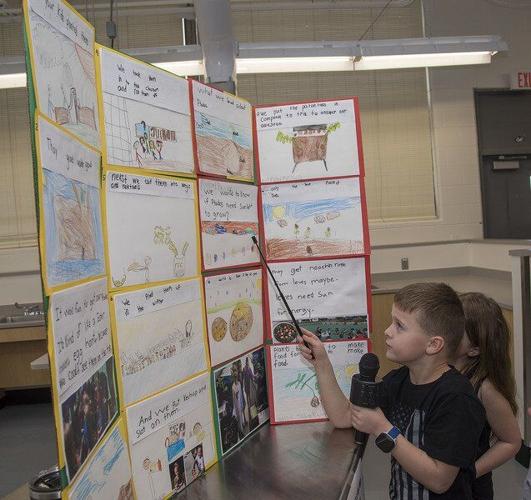 Royalton-Hartland Central School Superintendent Hank Stopinski gets a tour of the new Animal Science Lab from 11th-grader Alex Stern, 16, who is showing off Olly, a Holland lop and 10th-grader Sophia Santella, 15. The Roy-Hart School District showed off the new agricultural lab on Wednesday.

MIDDLEPORT — The Royalton-Hartland School District conducted a showcase of its agricultural education program on Wednesday. It had district students demonstrating projects that were related to agricultural sciences, and also showed off the newly-renovated labs for small animal care, food science and agri-science.

It was meant to show off what Roy-Hart’s agricultural program has been able to teach students since it was implemented four years ago.

High school agriculture teacher and FFA advisor Matt Sweeney credited his own background in dairy farming for his familiarity with such showcase events. However, this was the first time he’s participated in one that was in a school setting.

“We’ve never held anything like this at the high school,’’ Sweeney said. “However, this is an excellent opportunity for us to demonstrate what we’re doing in agricultural education in the pre-K through 12th grade classrooms here at Roy-Hart.”

The agri-science lab showed off projects related to innovation in agriculture, such as finding improved alternative designs for greenhouses, using growing towers that use UV light to grow lettuce, and coding for automated farming vehicles. One particular display had a large pool containing koi and goldfish, and demonstrated how fish waste can be used as an alternative fertilizer for plants.

The small animal care lab showed off multiple animals who were tended to by students, as well as a display of a dissected cow’s eye. Animals being taken care of included hamsters, guinea pigs, rabbits, a chinchilla, and a bearded dragon.

“I love learning about the animals,” said 10th-grader Clara Wojciechowski, “So one day, if I’ll have any of them as a pet, I’ll be able to take care of them properly so that they can live a better and longer life.”

In the food science lab, there was a demonstration of how strands of DNA can be extracted from strawberries. The intent behind it is to extract DNA in order to better look at the strands under a microscope. This can help to find sicknesses in the plant, or find a way to breed more nutritious ones.

“After all of this, we can put it underneath a microscope,” said 10th-grader Vanessa Gant. “It’s good to know what’s in the strawberries so we can make it better, more nutritious, and more appealing for customers.”

Kids from Susan McLaughlin’s first grade class also used an air-fryer to cook potato wedges made from potatoes that their class grew.

Sweeney stated that the creation of the program itself was encouraged by interested district students back in 2014. He feels proud of his students, and how they’ve managed to make the program seem worthwhile.

“It’s a testament to this community.” stated Roy-Hart Superintendent Hank Stopinski. “Our school board had the vision and the wherewithal to see it, they charged me to make it happen, and then we had all these partners here today who believe in it.”

Funding for these programs and facilities has come from FMC Corp., the Grigg Lewis Foundation, the Royalton-Hartland Agricultural Foundation, State Farm, and ExxonMobil, as well as a grant from the U.S. Department of Agriculture’s Food and Nutrition Service Farm-to-School Program.