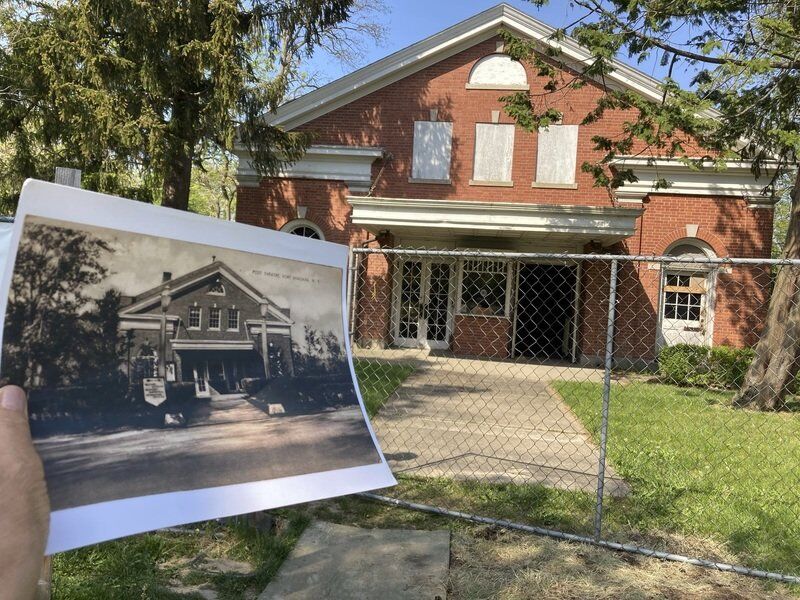 David Graf holds an old photo of the long-vacant movie theater, built in the 1930s for the pleasures of soldiers and their families at the former Army post in Old Fort Niagara State Park. He hopes to restore the place and create a community theater and event space with a children's theater program. 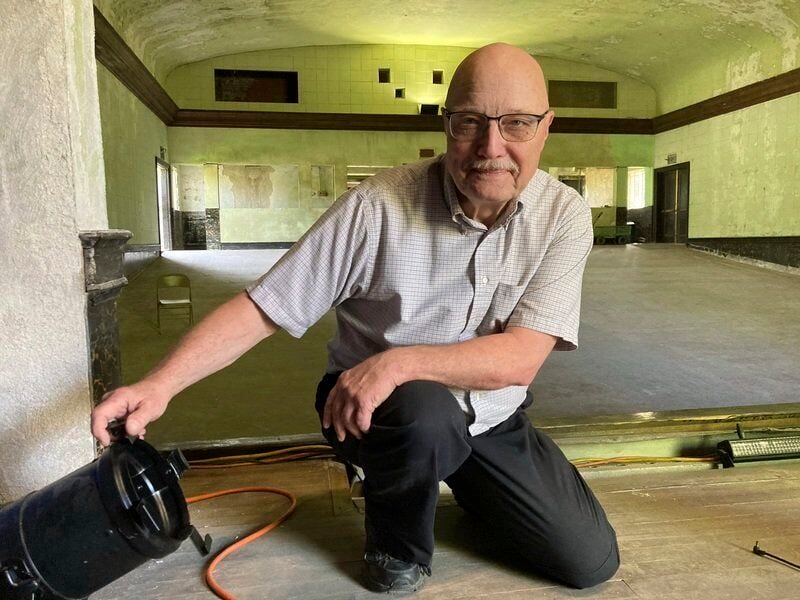 David Graf of Youngstown adjusts a stage light in the long-vacant post theater at Fort Niagara State Park, which he plans to restore and convert into a community stage and event space with a children's theater program. An online music fundraiser with local bands on the theater stage, will be held at 6:30 p.m., Thursday, June 10. The concert is free at www/niagaraposttheater.org.

David Graf holds an old photo of the long-vacant movie theater, built in the 1930s for the pleasures of soldiers and their families at the former Army post in Old Fort Niagara State Park. He hopes to restore the place and create a community theater and event space with a children's theater program.

David Graf of Youngstown adjusts a stage light in the long-vacant post theater at Fort Niagara State Park, which he plans to restore and convert into a community stage and event space with a children's theater program. An online music fundraiser with local bands on the theater stage, will be held at 6:30 p.m., Thursday, June 10. The concert is free at www/niagaraposttheater.org.

YOUNGSTOWN — David Graf is creating his legacy in an old movie theater.

When he's finished, it's going to be a stage for the entire community, a place for theater productions and concerts and events in Fort Niagara State Park. More importantly, it will also be a place for children's theater.

His passion for the project comes from his relationship with his step-daughter, Amy Teal, founder of Teal's Niagara Theater in Lewiston.

He first met Amy when she was in the eighth grade and since then, he's followed her theater career, watching her many performances and productions.

"When I started working with Amy I saw how complicated theater was," he recalled, noting with each production there was a need for dressing rooms, lights, bathrooms, comfortable seats, a good stage, and so much more. Finding the right space to perform was critical to a production's success.

While he observed the theatrical challenges with his engineer's brain, he observed with a father's heart the impact such an experience had on the children.

Teal remembers Graf watching as she readied her young actors for a performance in the basement of a Youngstown church. "We circled up, holding hands, and I was giving a pep talk, telling the kids how proud we were of them and that now was the time their hard work would pay off, and he had tears streaming down his face."

So, at 72 years old and retired from years spent in alternative energy research, automation, and other assorted jobs suitable for "a sampler of life," as Graf calls himself, he's turned his attention to the long-closed movie theater, built in 1931 to entertain Army troops at the former military post at Fort Niagara State Park.

He signed a contract with New York State Parks to put $2 million into its restoration. If he is able to do that, the contract allows him to use the theater, rent-free, for 20 years, before he then hands it back to the state parks department.

Bob Emerson, director of the nearby Old Fort Niagara, said that he's delighted to see the state hand over the reigns of the project to Graf.

"This is a building that was well built but state parks hasn’t had the funds to maintain the building," Emerson said. "This is a way the private sector can come in and use a well-built building for beneficial purposes."

It's going pretty well. Graf has already received grants including $120,000 in Niagara River Greenway Funds, which went to repair the roof of the building. He has also received a $10,000 grant from the Niagara Falls National Heritage Area.

"We're really excited about the project," said Sara Capen of the Niagara Falls National Heritage Area regarding the grant her nonprofit group gave to Graf.  "It drives the opportunity for the audience to engage in experiences that reflect the history and culture of the Niagara region."

Graf has gathered a wide-ranging board of directors with experience in arts and construction to help him fundraise and guide him through the process, including Aaron Dey, who also sits on the board of Old Fort Niagara. Dey said when the state seeks plans for the development of the barracks and other buildings left behind when the base closed, the theater was included in the request for proposals and was likely holding other projects back. "If you can get the theater working, the rest of the buildings are going to light up," Dey said.

It can be done. A similar project points the way toward success. In the 1930s, the federal government built nine movie theaters in forts across the U.S. through the Works Progress Administration, called the WPA. Five theaters still exist, including the one at Old Fort Niagara. One other theater in Georgia has been rebuilt and since become an important part of the surrounding community.

Evan Goetz, executive director of The Tybee Post Theater in Tybee, Ga., said his theater was restored by a nonprofit group of supporters and reopened in 2015. A Georgia Council of the Arts grant helped recreate the historic marquee and box office and the city purchased the sound, lighting, and projection equipment, which it leased back to the theater.

Since opening to the public, over 100,000 visitors have walked through the Tybee Post Theater doors, for movies, plays, concerts, and more, Goetz said.

"We partner with local organizations for use of our space as well," he added, noting "Demographics of all ages and nationalities come through our door. It is a true community space."

Despite the success of the Georgia post theater, Graf knows his restoration project in the state park isn't going to be easy. So, he's reaching into the community for help.

An online music fundraiser, with local bands videotaped on the theater stage, will be held at 6:30 p.m., Thursday, June 10. The concert is free but registration is required on the website, www.niagaraposttheater.org, where digital visitors can become a "Friend to the Post," and sign up to volunteer for a variety of services needed.

As for Graf, his eye is on the prize. He figures he needs about $3 million to refurbish the Post Theater, and he's got the floor plans for an extension that includes wardrobe and tech rooms, storage, orchestra balcony, event space, and more.

Years from now, he hopes that many young lives will be enhanced by taking part in productions on the stage he's is rebuilding, in the way that the stage influenced the life of his step-granddaughter, Madalyn Teal, who started acting at age four when she was the youngest child in the musical "The Sound of Music."  Now 19,  Madalyn Teal represented the region in the recent Miss New York State contest. Graf attributes her success, in part, to growing up with the confidence and poise that acting provides.

Because, while the Niagara Post Theater is envisioned as a place the entire region can enjoy, he's doing this project especially for the kids and the supportive community that is created around them during every production.

To take a video tour of the theater online, visit www.niagara-gazette.com.

• WHAT: A virtual fundraiser for the restoration of the Post Theater in Fort Niagara State Park