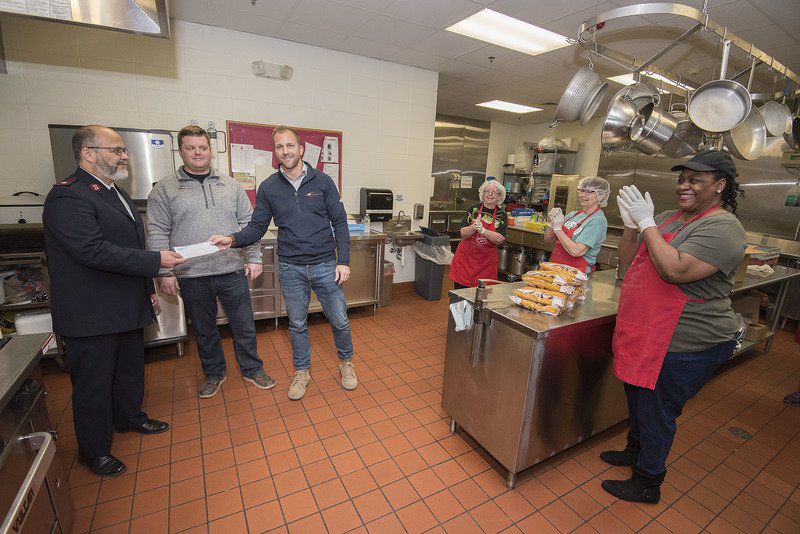 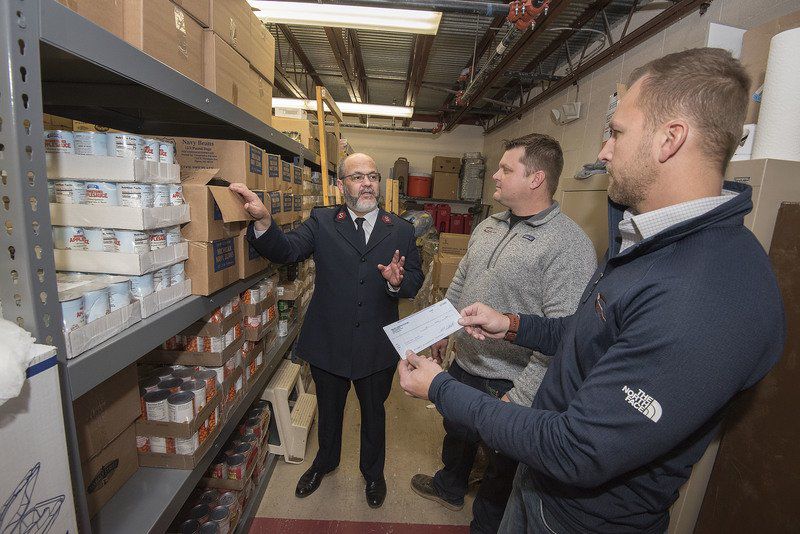 It's that time of year again.

The Salvation Army is reaching out to the community for its help to keep to the local soup kitchen operating, with the 36th annual Sister Mary Loretto Memorial Soup Kitchen Drive.

Lockport Salvation Army Major Jose Santiago said it costs $150,000 to keep the soup kitchen operation, but the annual fundraiser goal is the same as this past year's — $65,000.

Typically, the drive starts the day after Thanksgiving, but this year it was jumpstarted on Tuesday with a donation of $10,000 from Mulvey Construction.

"Mulvey Construction is committed to helping the Lockport community in any way possible," the brothers said in a release. "We would like to thank Major Jose Santiago and the Salvation Army for their continued effort to help those in need. We hope this donation can provide a chance for families to have a happier holiday season."

Santiago said the soup kitchen is mostly staffed with volunteers and one paid part-time cook that works 15 hours a week.

Although the economy has been on the upswing for the past few years it has not translated into a prosperous Lockport, Santiago observed.

"You see where the economy has done better, for most of our people up here it is not their case. They are still living check-by-check. We call them the working poor. Because it's no longer that these people are lazy, these people are dependent on the government. It's not like that any longer. If they want to receive welfare they have to work," Santiago said. "So sadly although the economy has done better for the people that are able to invest, to be more savvy in the business world. For the simple people, it is not the case."

He thinks that the need in Lockport has increased because there are few good-paying jobs available or skilled people feel they cannot afford or do not need further education or training.

"I think it sadly has increased. Why do I say that. Because sadly college is so expensive that many young people do not go to college, and they do not go to a trade school. They go to high school ... and young people think a high school diploma is good enough for them to come up in the world," Santiago said. "That means that people with a high school diploma today or less they are very gifted and talented, in some particular area, are going to be the simple people that we would need to help to. Because the job that they are able to acquire, although they work, is not going to be able to pay the bills."

He further added that there are many living expenses, like car insurance, phone bills, medicine, food that push people toward a need of assistance.

"Many of the people that we see here that come for rent assistance or utility assistance or even to the soup kitchen they tell us that yes they work, but the money they make is not enough," Santiago said. "When they have to pay car insurance, phone bills, medicine, put food on the table, plus all the challenges of life, their money is not enough."

Last year the Soup Kitchen Drive did not meet its goal until after the traditional Christmas Eve deadline. Santiago said he is trusting the generosity of the community to get the Salvation Army to that goal this year.

"We are hoping. I am praying. I'm trusting that the community at large will once again response to the only soup kitchen in town," Santiago said.

The soup kitchen was organized in 1983 by Sister Mary Loretto and Jo Roberts, the former director of the Grace Episcopal Food Pantry. At the time, Roberts said, there was a need to provide meals for people living in one-room apartments with no cooking facilities.

The operation, originally located inside German Lutheran Church, gradually grew into a soup kitchen and — as Sister Mary Loretto once put it in a file article on the facility’s history — a place for the “hungry, lonely, depressed and those one-room dwellers.”

Conflicts between soup kitchen operations and church activities later prompted a public call from both women for possible other accommodations. An archive article by former US&J writer Cindy Meal noted that they published their needs in the newspaper and were offered the use of the Veterans’ of Foreign Wars facilities until they found a permanent home.

The soup kitchen opened on Sept. 12, 1983, serving soup, bread and coffee to seven clients. Food was purchased with a $250 loan from the Grace Episcopal Food Pantry.

In 1985, the soup kitchen moved to its current location at the Salvation Army citadel, 50 Cottage St.

The annual holiday drive to support soup kitchen operations was established in 1983 with help from then-New York State Assembly Member Matt Murphy, Sister Mary Loretto and Dan Kane, managing editor of the US&J at the time.

HELPING OTHERS, REMEMBERING LOVED ONES

Through the years, the annual drive has developed into not only a way to help support operations at the soup kitchen but for community members to offer support in memory or recognition of their loved ones.

A donation coupon, printed regularly in the US&J during the drive, has served as the primary method for donating while allowing people to recognize their family members or friends in the process.

During the drive, community members are encouraged to clip the donation coupon out of the newspaper and bring it to the Salvation Army’s Cottage Street location.