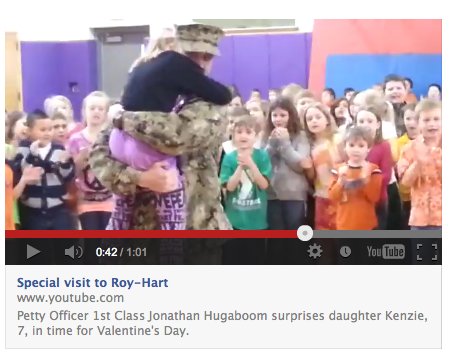 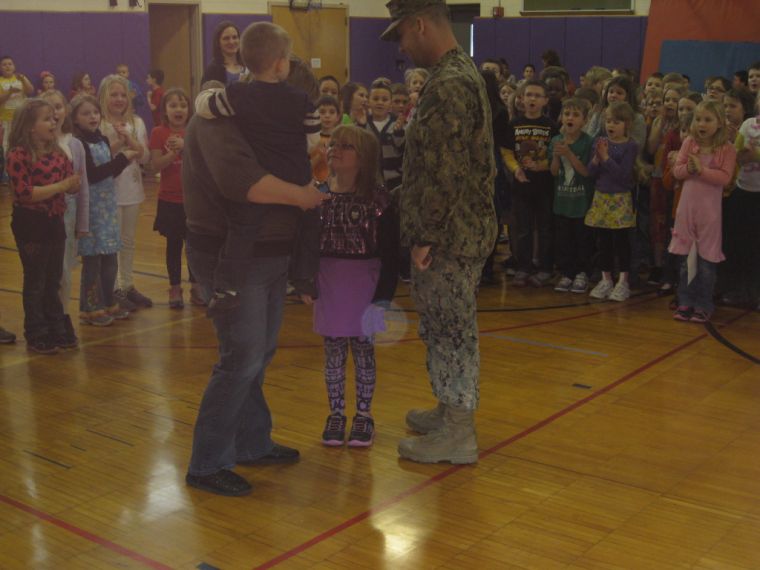 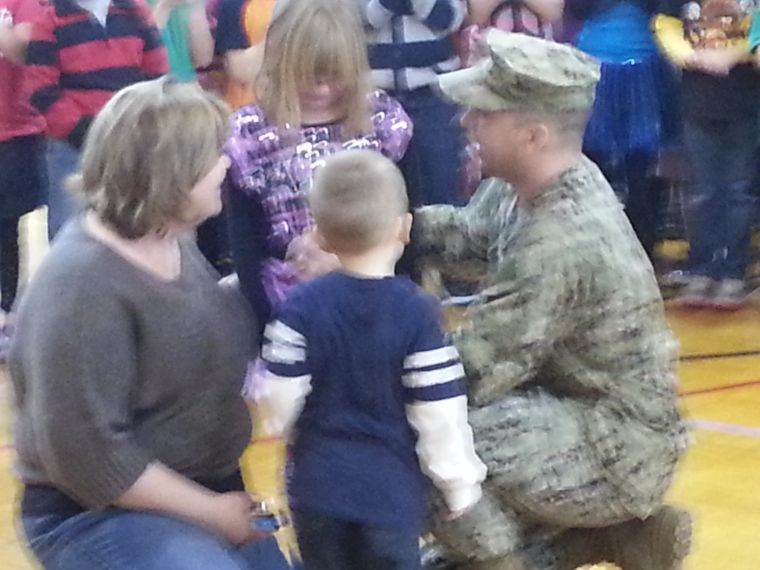 GASPORT –– Seven-year-old Kenzie Hugaboom asked if her father would still be her valentine, even if he was overseas. But Tuesday afternoon, Kenzie received something much better than a phone call.

A hug from her valentine.

Petty Officer 1st Class Jonathan Hugaboom made a surprise visit to Royalton-Hartland Elementary School, catching his daughter Kenzie off guard. Hugaboom had been overseas for about a year, save for a short visit in October, before returning home Tuesday.

Kenzie was in gym class when her fellow students started to file into the gymnasium at about 2 p.m. Tuesday. The rest of the school lined up along the wall in the hallways, while two kids holding American and U.S. Navy flags led Hugaboom from the main office to the gym. The place got loud, as students began to cheer and clap when Hugaboom walked in.

Kenzie ran over to her father, who dropped to one knee as the two embraced. The Roy-Hart kids began to chant “USA, USA,” something that wasn’t planned, Principal Donna VanSlyke said.

Hugaboom scooped up Kenzie and was joined by wife Julie and Kenzie’s brother Brody. The whole event was unexpected, Hugaboom said.

Hugaboom, a U.S. Navy Seabee, left last February for the Diego Garcia facility in the Indian Ocean. Then he was stationed in Japan before coming home Tuesday. The visit won’t be long, as Hugaboom will leave for Virginia Friday morning.

It wasn’t his first time at the Gasport school. Before he left a year ago, Hugaboom stopped by Kenzie’s class to talk with the kids.

Julie Hugaboom called VanSlyke on Monday, asking if Jonathan could come by to surprise Kenzie. VanSlyke was sure OK with it, the school just welcomed U.S. Army Sgt. Timothy Marciniak home in December. Marciniak surprised his daughter Madison after spending a year in Qatar.

The Hugabooms said Roy-Hart has been very helpful with Kenzie while her father was overseas. The teachers in particular have been awesome, the family said.

”This school has been excellent,” they said.

Shortly after the celebration broke up, school was back in session at Roy-Hart as kids returned to class. But not Kenzie, who was off to show her father her classroom. The two left the gym, walking down the hallway holding hands.