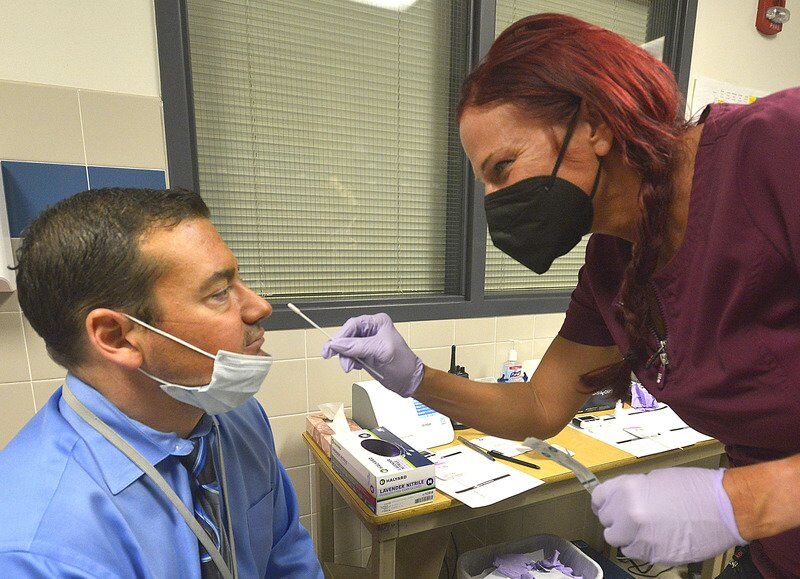 Aveanna RN Catherine Diaz tests Starpoint Superintendent Sean M. Croft at the school’s in house testing site. Aveanna is the outside company used by the district. The site can run both PCR and antigen tests. (Photos by Dan Cappellazzo) 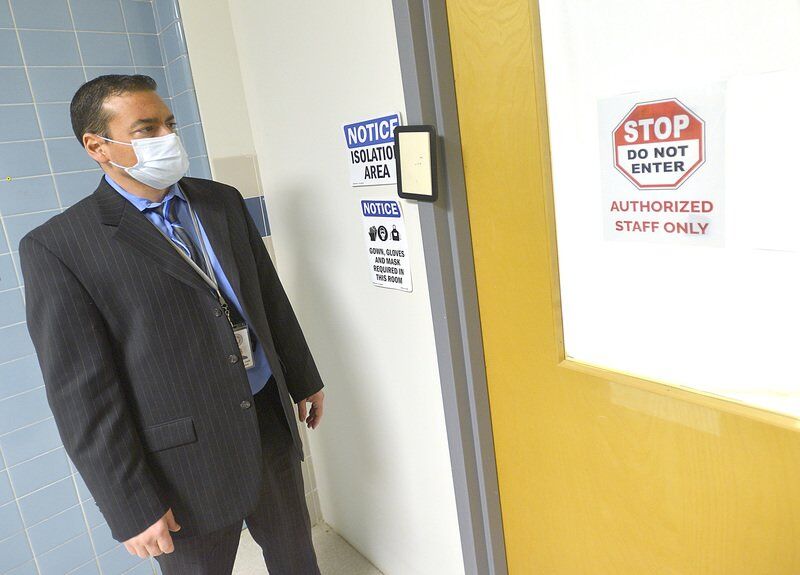 Starpoint Superintendent Sean M. Croft stands outside of the school’s in house Covid testing site. The school but the room, converting a hallway, installing a wall and door to secure a safe test site within the school. 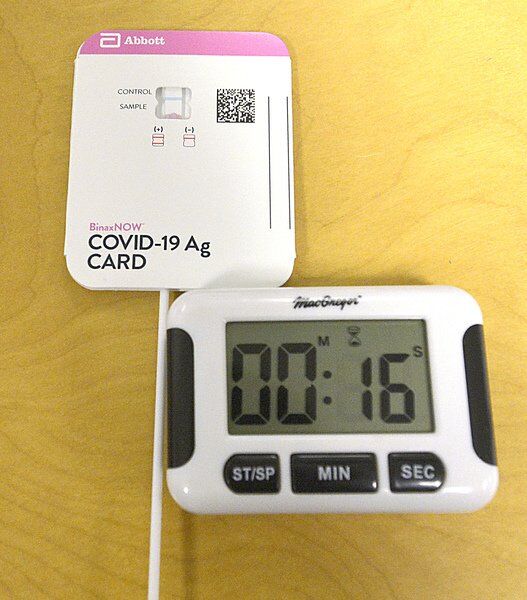 A Covid antigen test is timed at Starpoint School’s in house testing site. 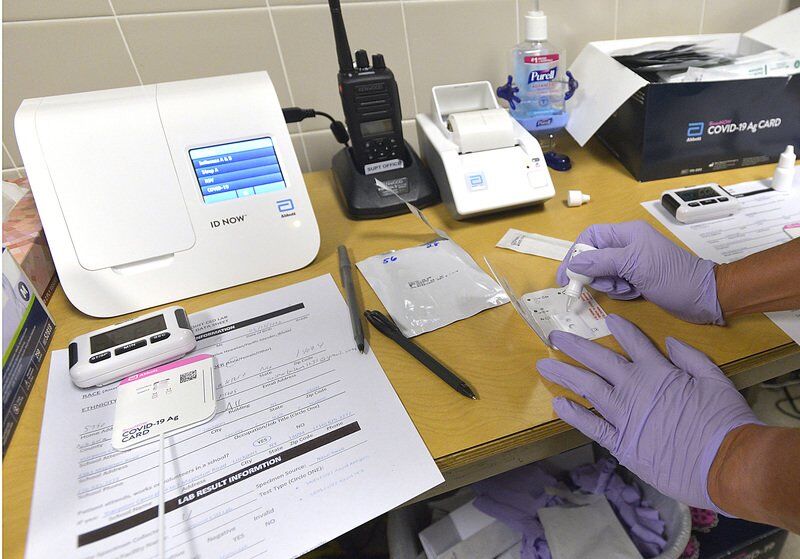 Aveanna RN Catherine Diaz tests Starpoint Superintendent Sean M. Croft at the school’s in house testing site. Aveanna is the outside company used by the district. The site can run both PCR and antigen tests. (Photos by Dan Cappellazzo)

Starpoint Superintendent Sean M. Croft stands outside of the school’s in house Covid testing site. The school but the room, converting a hallway, installing a wall and door to secure a safe test site within the school.

A Covid antigen test is timed at Starpoint School’s in house testing site.

The Starpoint Central School District has taken a proactive approach to protecting its staff and students from COVID-19. In early November, the district rented a PCR testing machine, and converted a sectioned-off portion of its building to become a Covid rapid-testing lab.

The Limited Service Lab (LSL), which opened at the Starpoint district on Nov. 3, is intended to test for Covid in students and faculty experiencing symptoms. According to Starpoint Superintendent Sean M. Croft, the lab has significantly helped in curbing school absences.

“It’s keeping kids in school, and that’s our main goal,” he said. “That student who might have the sniffles, in the past they were excluded from school until they had a negative test. They were missing three or four days of school, and a lot of times those tests would come back negative.”

The lab is exclusively for staff and students in the Starpoint district, so this is not a public alternative to usual testing locations, however, it can take some strain out of finding testing for members of the district. It was set up in a renovated entrance hallway to the Starpoint district building, and was walled off into being its own separate room. The room was originally made to be a quarantine space, but was converted into the testing lab in November.

Students and faculty who are experiencing symptoms, or have been exposed can now get a test that can take 10 to 20 minutes while they’re on site. If a test comes back negative, then a student can return to class immediately.

“We can set them up for an appointment on the same day,” said Croft. “They get tested, and if they’re negative, and nine times out of 10, they can go right back to class.”

On average, the lab can go through 17 tests per day, however, since Covid rates have peaked in January, the lab is processing 25 to 30 tests per day. The rapid antigen tests themselves have been provided for free from the New York state department of health. The machine used for the testing is rented cost free from the medical equipment company Abbott Laboratories, however, the reagent pods need to be purchased separately. Approximately $20,000 of the district’s federal Covid relief money has gone towards restocking the reagent pods for these tests.

The “ID Now” testing device from Abbott Laboratories, is also capable of detecting other diseases, though Croft currently only wants to focus on testing for Covid.

“If you buy different reagents for it, you could run influenza on there, you could run RSV, you could run strep throat,” said Croft. “I don’t think we want to get into that as a school district though. We’re kind of focused on Covid, but it does have other applications.”

The recommendations on when to use either PCR or rapid antigen tests have varied. The method currently used by the lab is to run a rapid antigen test on everyone who comes in for one, and if the test of someone experiencing symptoms comes back negative then a PCR test is done as well to verify if the first test was correct.

In order to keep up with the frequent use, Starpoint has also taken on contracted nurses from the Aveanna nurse staffing company to help their own nursing staff. For three days of the week the lab is staffed by a nurse from Aveanna, and on the other two it is staffed by school nurses from Starpoint. With the heightened case load over the last few months, running these tests is usually a full day job for the nurse on duty.

“I get here at 8 p.m., and it’s usually busy all the way until 4 p.m.,” said Catherine Diaz, an RN on contract from Aveanna.

While Limited Service Labs could be implemented in other districts, Starpoint is in a particular position due to all of its schools being in a single building. While there are other districts in Niagara County that have a similar layout to Starpoint and could reasonably implement labs like this, it could be more difficult for larger districts that have their schools in separate buildings.

“We’re blessed that our four schools are connected,” said Croft. “So if I have a kindergartener or a 12th-grader, we can walk them down to the lab. Bigger school districts, it would probably be a bit more pricey, because you would need a lab in each building.”

Limited Service Labs might not be a good fit for every school district, but Starpoint has indicated that it has been crucial to keep their district open, especially during this recent surge in the Covid pandemic. Considering the concerns held by people worried about keeping schools open, this type of lab could be a useful tool for at least some districts in being able to fight the spread of Covid.