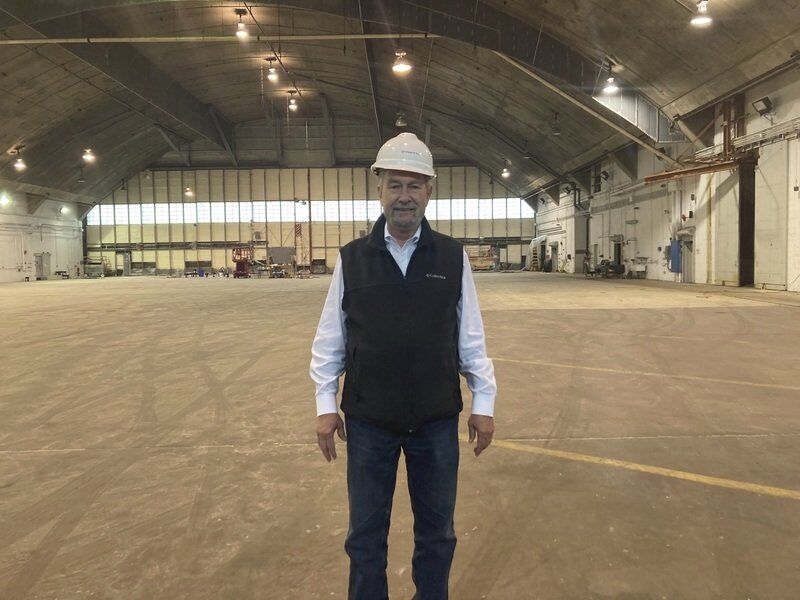 Christopher Beskar, center, founder of Stavatti Aerospace Ltd., stands in the hangar at Stavatti Niagara, a Stavatti subsidiary, where the company will build prototypes of Beskar's aircraft designs. With him are Stavatti Niagara's president/CEO John Simon, right, and Dr. Robert C. Sugarman, who is chief scientist and director of Human Factors. 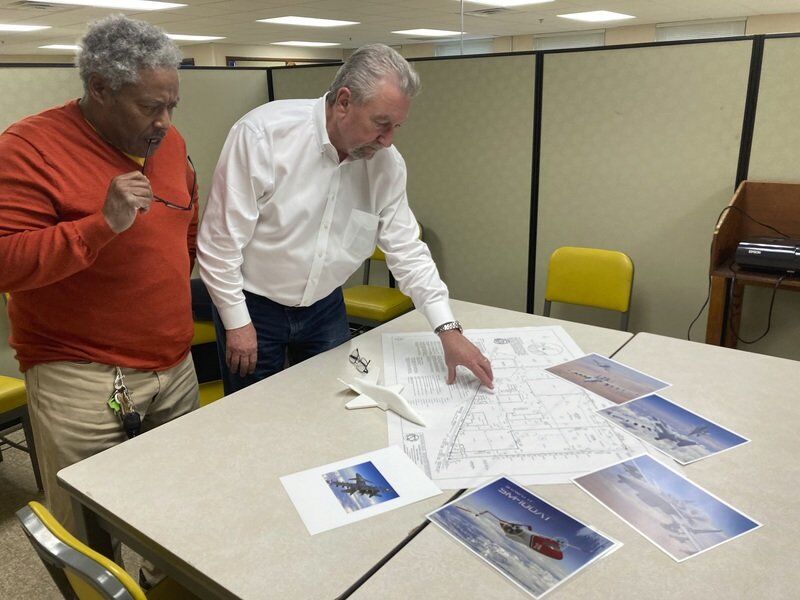 John Simon, right, president and CEO of Stavatti Niagara, stands with Ken Hamilton, a project director, and points to the plans for the renovations for the nearly 20-acre Porter Road site where their company will build aerospace prototypes. 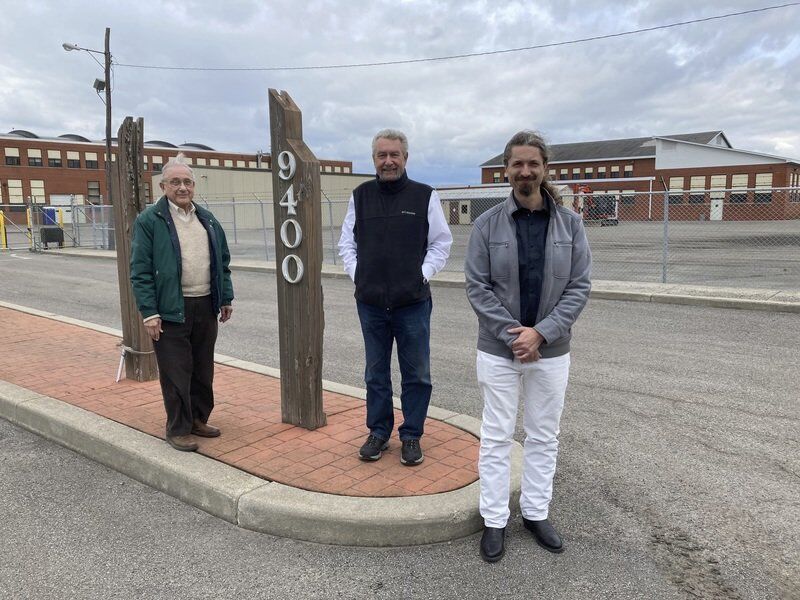 Christopher Beskar, right, founder of Stavatti Aerospace Ltd., stands at the entrance to the new plant of Stavatti Niagara, a Stavatti subsidiary, located adjacent to the Niagara Falls International Airport, at 9400 Porter Road, where the company will build prototypes of Beskar's aircraft designs. With him are Stavatti Niagara's president/CEO John Simon, center, and Dr. Robert C. Sugarman, who is chief scientist and director of Human Factors.

Christopher Beskar, center, founder of Stavatti Aerospace Ltd., stands in the hangar at Stavatti Niagara, a Stavatti subsidiary, where the company will build prototypes of Beskar's aircraft designs. With him are Stavatti Niagara's president/CEO John Simon, right, and Dr. Robert C. Sugarman, who is chief scientist and director of Human Factors.

John Simon, right, president and CEO of Stavatti Niagara, stands with Ken Hamilton, a project director, and points to the plans for the renovations for the nearly 20-acre Porter Road site where their company will build aerospace prototypes.

Christopher Beskar, right, founder of Stavatti Aerospace Ltd., stands at the entrance to the new plant of Stavatti Niagara, a Stavatti subsidiary, located adjacent to the Niagara Falls International Airport, at 9400 Porter Road, where the company will build prototypes of Beskar's aircraft designs. With him are Stavatti Niagara's president/CEO John Simon, center, and Dr. Robert C. Sugarman, who is chief scientist and director of Human Factors.

TOWN OF NIAGARA — John R. Simon doesn't get much sleep these days. He's leading the construction of an aerospace plant on property adjacent to the Niagara Falls International Airport and the project has him up in the wee hours to pull all the final pieces together before production begins this month.

"I'm up at three in the morning," he admitted during a tour of the facility on Thursday, where workers were insulating giant walls — in a hangar that's been mostly vacant for 17 years — preparing it for the construction of aircraft prototypes.

The early hours are due to the excitement he feels heading to the finish line of a project that could impact the entire region, providing hundreds of jobs, creating educational programs that lead students to the aerospace industry and creating new housing in the Niagara region for an estimated 600 employees over the next several years at that location, and thousands more in the years to come with the planned aerospace production facility yet to be announced.

Simon is president/CEO of Stavatti Niagara Ltd., a subsidiary of Stavatti Aerospace, a company focused on the design, development and production and "next-generation aerospace vehicles."

The founder of Stavatti is Christopher Beskar, an aerospace engineer from Minnesota, designer of the aircraft prototypes which will be built in the hanger on nearly 20 acres of former Niagara Falls Air Reserve property.

The site originally included 10 buildings, but one was demolished almost immediately following the Town of Niagara board's recent approval of the company's site plan. Two more buildings will be demolished as renovations progress.

On Thursday, Simon stood in the 47,000 square foot hangar and pointed out the work being done there, from insulation sprayed onto the walls to new water infrastructure at a cost of about $600,000. "We have to be confident all the mechanicals, safety and infrastructure work properly, therefore, they are all being improved or changed," he said.

While the company has no signed contracts yet for production, there are plans in the works, including the production of fighter jets for Taiwan, and six letters of intent to build prototypes from governments and private parties. When asked where the actual planes would be produced, Simon hinted of a huge announcement on the manufacturing site in days to come.

Simon said that he and Beskar, looked throughout North America to find the right site for the company. They were contacted by representatives, including some governors, of 40 states including 50 airports in the United States and representatives of eight airports in three Canadian provinces. Simon said they chose the Niagara region based on a number of variables, including proximity to the airport, as well as the affordable power provided by the New York State Power Authority, thanks to the energy generated by Niagara Falls.

Beskar has been preparing to open an aerospace plant for most of his life. In the 10th grade, he designed a fighter aircraft and submitted it to a Department of Defense agency. The positive reception from that proposal launched his career in military aircraft design before he graduated high school.

While a sophomore at the University of Wisconsin River Falls, Beskare founded the Stavatti Corporation to design and produce military and commercial aviation aircraft as well as manned space vehicles. In 1996, while a university senior, he won a NASA contest writing how the space agency could spin-off its technology to private industry.

In 2014, Beskar founded Stavatti Aerospace Ltd. Initially concentrating upon air defense fighters. Since then, Stavatti’s focus has broadened to include the diverse array of new designs now under development.

Locally, Stavatti Niagara currently maintains a small staff until the prototype production begins this month and more workers are brought to the site. Staff includes Ken Hamilton, a community advocate and former Niagara Gazette columnist, who is a project director, and Dr. Robert C. Sugarman, who is chief scientist and director of Human Factors.

Simon, former head of the Niagara County Industrial Development Agency, has led other potential projects in the Niagara Region, including a proposed theme park and resort at former Summit Mall in Wheatfield, and more recently, a proposed world weather center at One Niagara in Niagara Falls.

If Stavatti meets its goals, the benefit to the communities surrounding the plant are significant, according to some community leaders.

Stavatti has an agreement with Niagara County Community College and the Niagara Falls School District to be the lead business in a New York State Pathways to Technology, or P-Tech program, which resulted in a $2.67 million grant to the school district and college to help prepare more graduates to meet the aerospace company's expected needs.

The first cohort of 25 eighth grade students in the P-Tech program begins in September, Laurrie said, noting the number of students being readied for aerospace jobs will grow each year, and those who study hard might possibly receive their high school degree and their associate's degree simultaneously.

"To this point, everything that has been discussed has been delivered," he said of Stavatti. "I have walked the facility. I've seen the actual brick and mortar and from there, the potential to employment pathways."

"Every day my faith and hope is bolstered that there is something phenomenal on the horizon there for kids," Laurrie added.

William J. Murabito, president of NCCC, is very committed to the educational component of Stavatti's plans.

"Early on, Stavatti had engaged us, talking about their plans and their potential and their need for employees at all levels," Murabito said on Friday. The college is creating new programming to fit the company's needs, including expanding the welding and machinist programs and adding some electrical programs.

"If they are successful," Murabito said of Stavatti, "they're going to be a game-changer for the region."

Simon said Stavatti is also getting support from the unions. John Scherrer, business manager of International Brotherhood of Electrical Workers, Local 237 in the Niagara region, said two of his 200 members are already working over at the site. "I've been talking with John Simon since January of last year," Scherrer said, noting that the plant has the potential for "a ton of work for us."

"John’s been one of our biggest supporters over there to get union workers to do the work. We're very excited," Scherrer added about the potential of employment of his electricians and other union construction workers. "It's been great working with him," he added.

Niagara Falls Mayor Robert Restaino, who toured the plant recently, said he was impressed by the level of detail and engagement by the Stavatti group. He admitted that some people might be reluctant to believe the big plans laid out by Stavatti, but noted that "It's important for a developer to make sure they've touched all their bases as they're moving forward. So far, Stavatti has done all the things needed to move forward."

Restaino noted that such development cannot be rushed. "All of these things come in phases and too often, once we hear a project is being planned, our expectations are ahead of schedule," he said.

"I'd love to have that level of employment and operations start next Monday," he added, "but, I'm patient. And I'm optimistic."

Additionally, the Niagara County Legislature offered its endorsement of Stavatti recently with a proposal that welcomes Stavatti to the region and a commendation that estimates the company could bring a benefit of more than $85 million to the county.