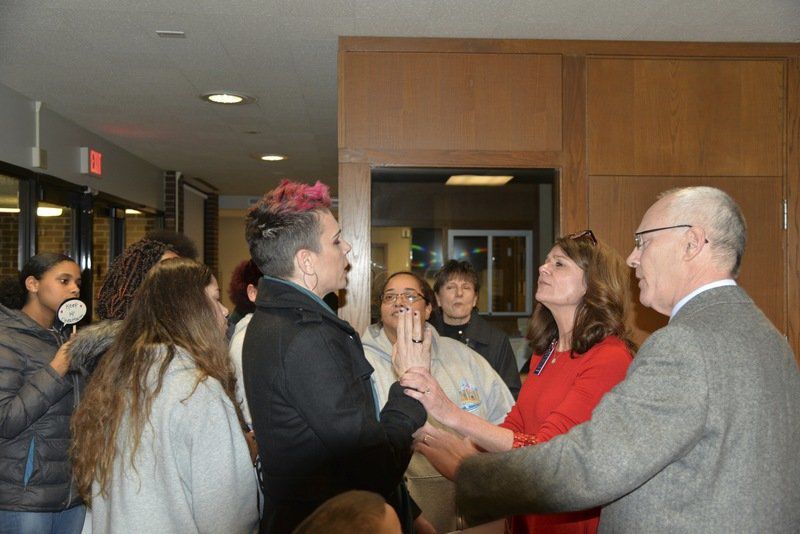 PHOTOS BY Connor Hoffman/StaffAs Superintendent Michelle Bradley (in the red dress) and Lockport school board president John Linderman talk with attendees in the district office lobby after Wednesday’s board meeting, Bradley appears to put a hand on Courtenay Sharpe, whose quick reply was: “please do not touch me.” 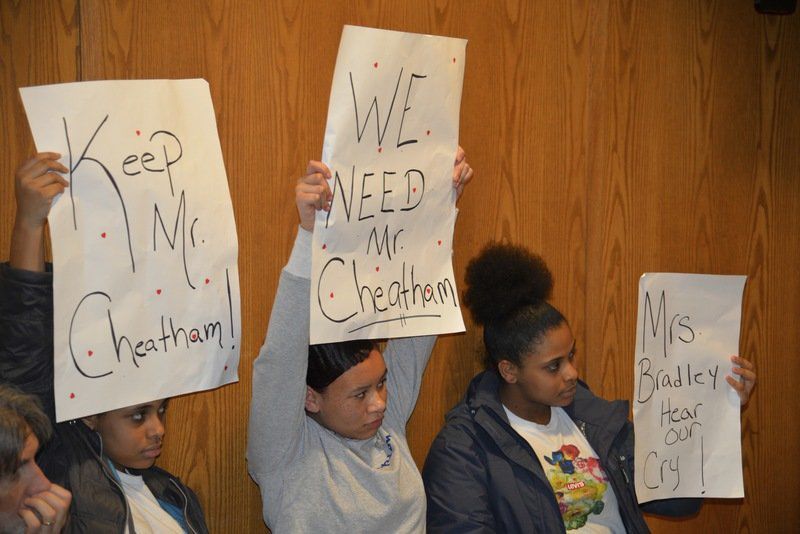 At the Lockport school board’s Wednesday meeting, students displayed signs of their support for Ronald Cheatham, a longtime peer mediator at North Park Junior High School whose request for part-time status was recently denied by the district.

PHOTOS BY Connor Hoffman/StaffAs Superintendent Michelle Bradley (in the red dress) and Lockport school board president John Linderman talk with attendees in the district office lobby after Wednesday’s board meeting, Bradley appears to put a hand on Courtenay Sharpe, whose quick reply was: “please do not touch me.”

At the Lockport school board’s Wednesday meeting, students displayed signs of their support for Ronald Cheatham, a longtime peer mediator at North Park Junior High School whose request for part-time status was recently denied by the district.

Community members continued their fight for Ronald Cheatham’s future in Lockport City School District at this week’s Board of Education meeting.

Cheatham, a General Motors retiree who has been employed by the district for 14 years, had asked administrators to approve a change in his status as a peer mediator to part-time from full-time. This was to accommodate income restrictions and avoid his being penalized by Social Security Administration.

Earlier this month, in a reversal of a claimed previous promise, district officials told Cheatham that his status would not be changed.

Several of Cheatham’s supporters showed up at the board’s Wednesday meeting with signs demanding the district reverse course. Meeting attendees had to wait to voice their concerns until the end of the business meeting, when comments about matters not on the board’s meeting agenda are fielded.

Right before the public comments began, Trustee Kyle Lambalzer expressed disappointment in the attendees having to wait until the end of the meeting to be heard.

“Let’s face facts. Most of the time this meeting is very sparsely attended ... I for one want to acknowledge the fact that the number of speakers like this means that a group of taxpayers, parents and students are dissatisfied with something we as a board are doing,” Lambalzer said. “I believe we would do well not only to listen to citizen concerns but actually hear them. We mustn’t forget as a board that we serve the public. We do not serve district administrators.”

When she got to the microphone, Renee Cheatham, Ronald Cheatham’s wife, continued voicing her displeasure to the board.

“For one thing, you guys are not communicating to my husband at all,” Mrs. Cheatham said, adding that the pending loss of the job he loves has been “a life changing event” for him.

“His blood pressure has gone up. He’s lost a lot of weight,” Mrs. Cheatham said.

Replying to officials’ previously stated concern about part-time status for Cheatham running afoul of union rules, Mrs. Cheatham said her husband is willing to retire and return as a contract worker.

“My husband was a contract worker when he first started 14 years ago ... He just got into the union last year, so it’s not a union issue,” she asserted.

Teria Young said the school trustees were elected to do what’s best for students and they are not doing that. The district should focus on hiring peer mediators, not more security guards, she said.

“Are we having a prison or are we trying to raise children here? They got to be surveilled and then we got security guards,” Young said. “We need to try a different tactic. Like trying with love and care. We need kids that feel they are loved and in a safe environment so they can learn.”

After Young’s comments drew applause, board president John Linderman addressed the audience by criticizing the Union-Sun & Journal for not immediately updating the online version of a Feb. 5 article reporting the district would not grant Cheatham’s request. The district’s response — sought by the US&J earlier in the day — was sent by Superintendent Michelle Bradley late on Feb. 5, after the report was posted.

“It was not printed in the first online story, so it never hit the public,” Linderman charged, although US&J staff previously pointed out to Bradley that her response was included in the Feb. 6 print edition.

“That explains kind of where the board is at and what we can do,” Linderman told the audience. “Again, I appreciate your concerns and your frustration.”

Right before the meeting was adjourned, Courtenay Sharpe, a Middleport resident, asked to speak, and Linderman told her she could not because she did not sign up on the public speakers’ list.

After the meeting, Linderman did make a point to talk with Sharpe and other attendees in the district office lobby. The nearly 20-minute discussion was at times contentious; at one point Bradley appeared to put a hand on Sharpe.

In the lobby, Linderman told the crowd he is limited in what details he can share about personnel matters, but said there is no one on the board who doesn’t respect Ronald Cheatham.

“You are treating these children like they are criminals and prisoners, so how do you expect them to act? If you’re treating them that way that means they are going to act that way,” Travis said.

Bradley said she did not like the culture that’s been created with the recent tension, right before she reached out for Sharpe’s hand.

“First of all, please do not touch me,” Sharpe quickly replied.

According to Mrs. Cheatham, district administrators previously told Ronald Cheatham they would approve a change in his employment status, then told him months later that they had decided to go a different route and could not accommodate his request.

In response to his offer to leave the union and work the peer mediator’s post as an independent contractor, Mrs. Cheatham said, administrators expressed concern about his requested rate, $12,000, not being in the budget.