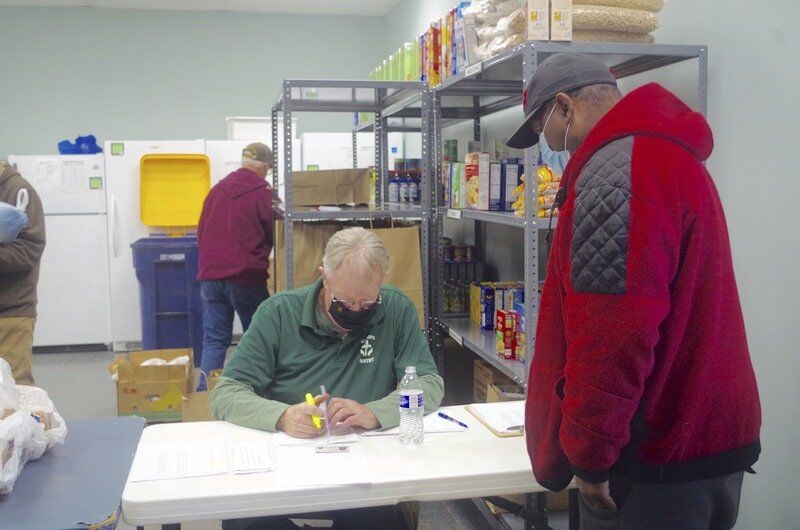 One of the clients to All Saints’ St. Vincent De Paul signs in after being allowed in to pick up a turkey dinner for his family this past week. (Photograph by Benjamin Joe) 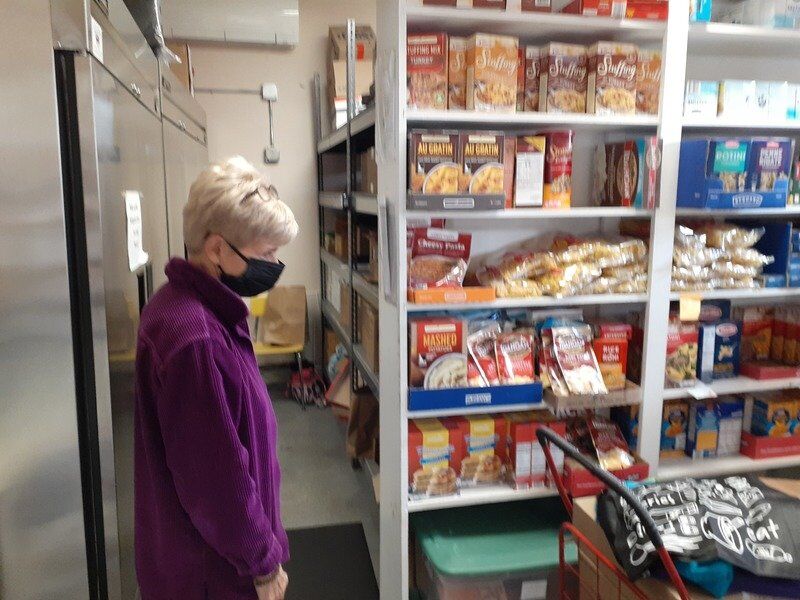 Newfane Food Pantry coordinator Kathy Phillips examines the pantry inventory on Tuesday. The pantry has received a lot of support from the community lately.

James Neiss/staff photographerCars line up at the Lockport Salvation Army where they were giving away free boxes of produce earlier this year as part of their outreach efforts.

One of the clients to All Saints’ St. Vincent De Paul signs in after being allowed in to pick up a turkey dinner for his family this past week. (Photograph by Benjamin Joe)

Newfane Food Pantry coordinator Kathy Phillips examines the pantry inventory on Tuesday. The pantry has received a lot of support from the community lately.

James Neiss/staff photographerCars line up at the Lockport Salvation Army where they were giving away free boxes of produce earlier this year as part of their outreach efforts.

2020 was an especially hard year for local nonprofits.

As we enter the 2021 holiday season, local groups say meeting the need has been a bit easier this year but there’s still an elevated demand in the community.

“We are serving between 140 to 150 meals a day,” Major Jose Santiago of the Salvation Army in Lockport said. “That’s going up.”

The reasons for the uptick, according to a survey conducted by Santiago, includes a 24% rise of newcomers to the soup kitchen.

All Saints’ St. Vincent De Paul Food Pantry on 61 Walnut Street reported an additional 30 families have signed up for aid. Mike Ulrich and Burt Marshall, president and vice president, respectively, said about 70 of those families came from the school district. That, Marshall said, is 70 out of 190 families that have signed up.

“We’re up for Thanksgiving over last year, way over, we’re probably 36 families up,” Marshall said.

Ulrich and Marshall talked as they allowed representatives of each family to come indoors, Tuesday afternoon, and receive items like butter, oil, potatoes, a turkey, a baking tray and other food items.

Fortunately for many local organizations, there’s also been a lot of help from the community.

“We’re getting a lot of people who donate food to the pantry,” Ulrich said. “And the food that we need to buy, and we don’t buy very much, we buy from the Western New York Food Bank (FeedMore).”

The Newfane food pantry, for instance, has received a lot of support recently. The pantry, which operates out of the St. Brendan on the Lake Catholic Church, though isn’t formally affiliated with, has been so successful lately that they believe that they can help even more people.

“The community has been wonderful with supporting the pantry since Covid started,” Kathy Phillips, the coordinator of the food pantry said.

While their efforts are going well, Phillips feels that the pantry can reach out more to more people, particularly seniors who might be unwilling to seek help.

“I think maybe there might be some elderly people out there that we’re not in contact with that could use help.” Phillips said, “I think it’s out of pride and self respect, they get reluctant to come out and ask for help. But we certainly would like to be able to reach them.”

The pantry has credited their success to their broad support network. This would be the 11 supporting churches, the people and companies who make donations, and particularly social groups like the Lions Club.

“All we have to do is ask, and the Lions Club is there with money or help,” Phillips said.

They also credited the generosity of people from the Newfane community, particularly after stimulus checks arrived.

“When people got their money from the government, if they felt that they had a lot to share, then they did share it,” Phillips said.

Ultimately the pantry is in a good place right now to help more, and the volunteers feel they can do that. They just need people to go to them, and ask for help first.

Back in Lockport, Ulrich also noted that All Saints doesn’t just serve food. They’ve been known to help in other situations like rent and utilities.

“We help with rent, we help with used appliances, utilities,” Ulrich said, and Marshall noted that furniture is also given to those in need.

“A lot of times when those old refrigerators break down, it’s better off to replace them than to fix them,” Marshall said.

Groups in the Falls are holding steady as well.

“Food requests are up, but not quite at the level during the lockdown, when we saw huge numbers of people that we had never seen before,” said Major Stephen Carroll of the Salvation Army of Niagara Falls. Carroll said that current numbers remain higher than they were prior to the outbreak of the Coronavirus.

“Food donations are also up,” he said, “but we are not able to cover all the needs with donated food. We are still having to make purchases to meet current demand.”

While the demand is not being fully met, Carroll said the group fortunately isn’t experiencing desperate food shortages.

“We are about where we usually are, we always need a little more,” he said. “Kinda getting-by is where we are.”