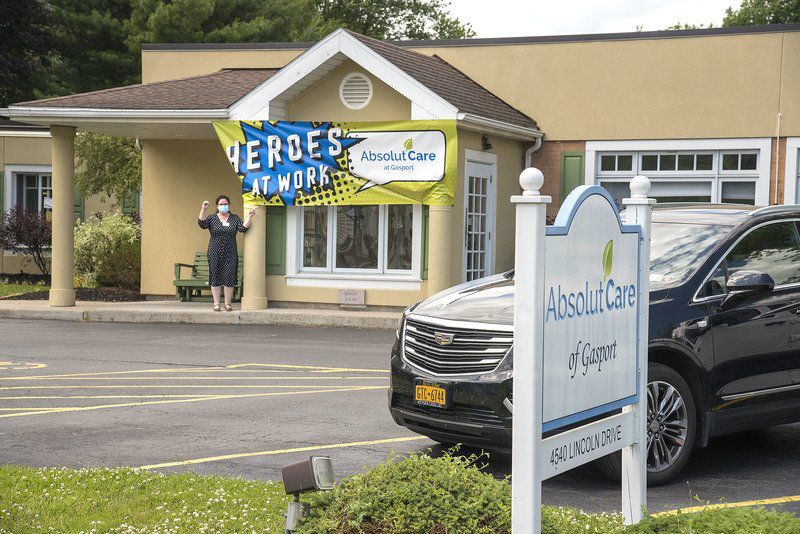 James Neiss/staff photographerReceptionist Nora Kovach at Absolute Care of Gasport hand signals zero for the fact that there have been no reported COVID-19 cases at the facility to date. Officials say the nursing home implemented enhanced safety protocols in March.

James Neiss/staff photographerThere were no COVID-19 cases diagnosed at Elderwood at Wheatfield until June 14 and the patient was isolated. The facility hasn't recorded a single COVID-19 death.

James Neiss/staff photographerReceptionist Nora Kovach at Absolute Care of Gasport hand signals zero for the fact that there have been no reported COVID-19 cases at the facility to date. Officials say the nursing home implemented enhanced safety protocols in March.

James Neiss/staff photographerThere were no COVID-19 cases diagnosed at Elderwood at Wheatfield until June 14 and the patient was isolated. The facility hasn't recorded a single COVID-19 death.

According to data collected by the New York State Department of Health, Elderwood at Wheatfield, Absolut Center for Nursing & Rehab in Gasport and DeGraff Memorial Hospital in North Tonawanda recorded zero novel coronavirus deaths among residents through mid-June.

Representatives of the nursing homes credit a combination of enhanced safety protocols and plenty of cleaning as keys to warding off the virus, which has proven to be particularly deadly among the elderly.

Jason Newman, the chief marketing officer of Absolut, said the Gasport facility has not yet had a positive case of COVID-19 among its residents so far this year. He said the nursing home implemented enhanced safety protocols in March before the shutdown began. These protocols included visitation screening, the use of PPE and placing all newly admitted residents under surveillance. That and a lot of cleaning, he said, are the reasons the facility was able to hold off the virus.

“We were aggressive and we were lucky that our procedures paid off,” Newman said.

Charles Hayes, vice president of marketing at Elderwood, said Elderwood at Wheatfield hadn’t reported any deaths thus far because no COVID-19 cases were diagnosed in the facility until June 14. At that time, the facility's lone positive patient was isolated, Hayes said.

“We received our first confirmed test of a resident with COVID-19,” he said. “Our protocols have prepared things in advanced. When a resident is diagnosed positive for COVID-19, they are placed in a room where they can be isolated and comfortable and monitored. Staff utilized the highest level of personal protective equipment, PPE, to protect themselves and the other residents.”

Hayes said the staff in the unit where the COVID-19 positive patient is located are using full personal protective equipment, including eyeglasses, N-95 respirators and infection control gowns.

"That equipment is put on before they go to see the resident and taken off after coming out from seeing the resident," he said. "That will allow them to continue to work on the unit with other residents.”

Hayes said calls was made to family of every resident to inform them of the situation, and a follow-up letter was sent reporting there is a COVID-19 positive resident at the facility.

The three facilities with zero deaths were not listed with the state data and were contacted via lists released by the Long Term Care Community Coalition.

Health department spokesman Jeffrey Hammond said the state's COVID-19 tracking system includes all confirmed deaths as well as presumed deaths as determined by a physician. The deaths are reported to the state by the facilities themselves.

Daniel Stapleton, Niagara County public health director, said declining COVID-19 infections, hospitalizations and deaths across the county are a credit to local officials working with hospitals and nursing homes to ensure that staff members had sufficient personal protective equipment and followed appropriate public health guidelines. Stapleton said the entire county acted correctly in the face of the crisis, but there is still a need to remain vigilant in the coming weeks and months.

Nancy Davis, of Burt, NY, wife of the late Donald Davis, entered into rest on Thursday, July 2, 2020 at Niagara Hospice House. She was born on March 11, 1938, the daughter of the late William and Margaret (Harrod) Bowes. Nancy was a graduate of Newfane Central School in 1956 and worked in th…