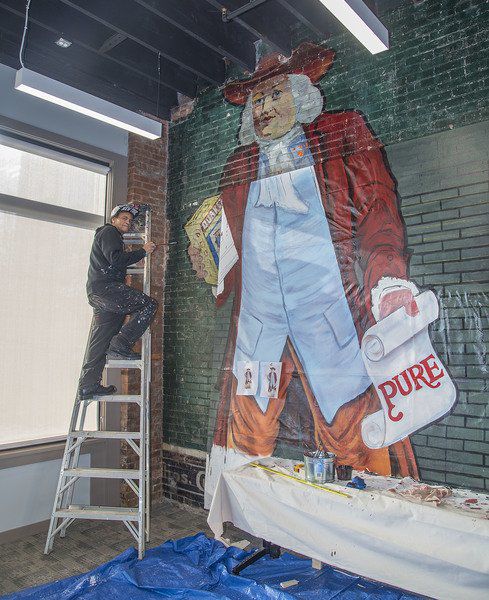 James Neiss/staff photographerInside the TReC Quaker training room, artist David Jones uses a canvas to restore the hidden part of an old Quaker Oats advertisement that was once on the outside of the Niagara Falls building and then partially painted over. 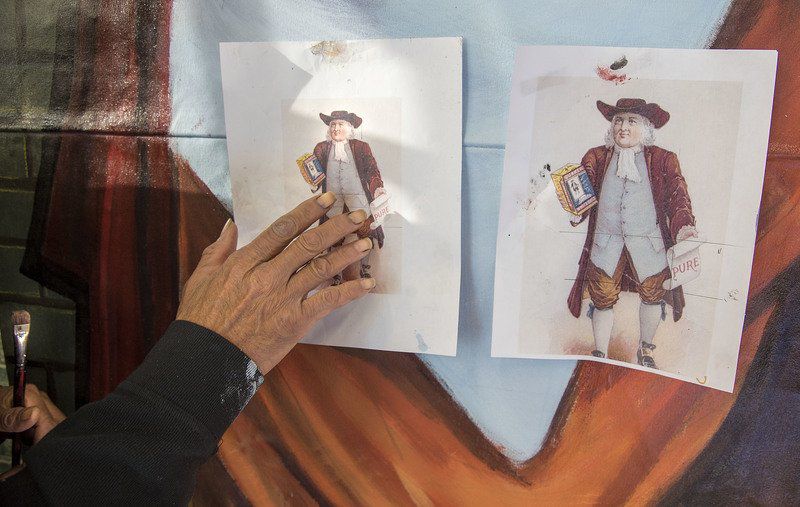 James Neiss/photographerA copy of the Quaker Oats brand logo that was adopted in 1907 for his restoration project.

James Neiss/staff photographerInside the TReC Quaker training room, artist David Jones uses a canvas to restore the hidden part of an old Quaker Oats advertisement that was once on the outside of the Niagara Falls building and then partially painted over.

James Neiss/photographerA copy of the Quaker Oats brand logo that was adopted in 1907 for his restoration project.

NIAGARA FALLS - By now, most people have seen the outside renovation taking place at the corner of Seventh and Niagara streets in downtown Niagara Falls, but few have seen the renovation that has taken place inside the new TReC building located at 616 Niagara St.

TReC’s very purpose, which is to be a business incubator for entrepreneurs, oddly enough found itself hiring an artistic entrepreneur to restore a historic piece of art invented by just that, an entrepreneur.

When renovation was underway and walls were being torn down to connect and rebuild the spaces, TReC director Patrick Whalen and his crew stumbled upon what was a very large, very old piece of history. It was an advertising ad from the 1900s. Back then, an immigrant by the name of Thomas Cusack was getting into the outdoor advertising business and it led him to painting a three-story high ad for Quaker Oats on the outside of the brick building that would eventually house the first grocery store in Niagara Falls.

Whalen quickly discovered that whoever owned the store next thought the ad was too distracting to customers and began painting over it.

“We were over the moon when we began to uncover it,” Whalen said.

Desperately seeking an artist who could restore the original ad, Whalen was less than enthused in the prospects he met with.

Sitting in the room “Thinking we were stuck,” Whalen said he heard a knock at the window and a man yelling at him through the glass. At first, Whalen said he thought the man was a panhandler.

“It was raining and he was soaking wet, holding a black garbage bag. I thought he wanted something to eat,” Whalen said.

Whalen motioned for the man to go around to the entrance and the man - David Jones - introduced himself as a painter.

Almost dismissing him under the assumption he was a residential painter, Whalen said, “All of our walls are painted.”

It was then that Jones clarified himself as an artist, noting that he has worked as a muralist from the age of 13 in different states and previously painted murals for Coca Cola, Red Wing Stadium, Rochester Savings Bank, Salvatore’s Italian Gardens and The Anchor Bar.

Whalen immediately showed Jones the partially covered giant Quaker Oats man on the brick wall. Jones almost fell to his knees at the historic find and instantly said, “I can do this. Do you know what the rest of the ad should look like?”

Whalen showed Jones an online picture of a complete ad from the 1900s and 20 minutes later Jones handed Whalen a hand-drawn sketch of the restoration.

The rest was, as they say, “history.”

Jones, who has been given the key to the city by former Mayor Paul Dyster, was able to fully recreate the piece of Niagara Falls history.

Jones recreated the ad on a massive canvas which hangs in front of the brick because the actual brick cannot be touched due to historic preservation guidelines.

“I was ecstatic to be a part of it and I owe it all to God for my artistic ability,” Jones said.

The official unveiling of the restoration will take place at 4:30 p.m. today at the TReC incubator, 616 Niagara St. Artist David Jones will be present to tell his story.