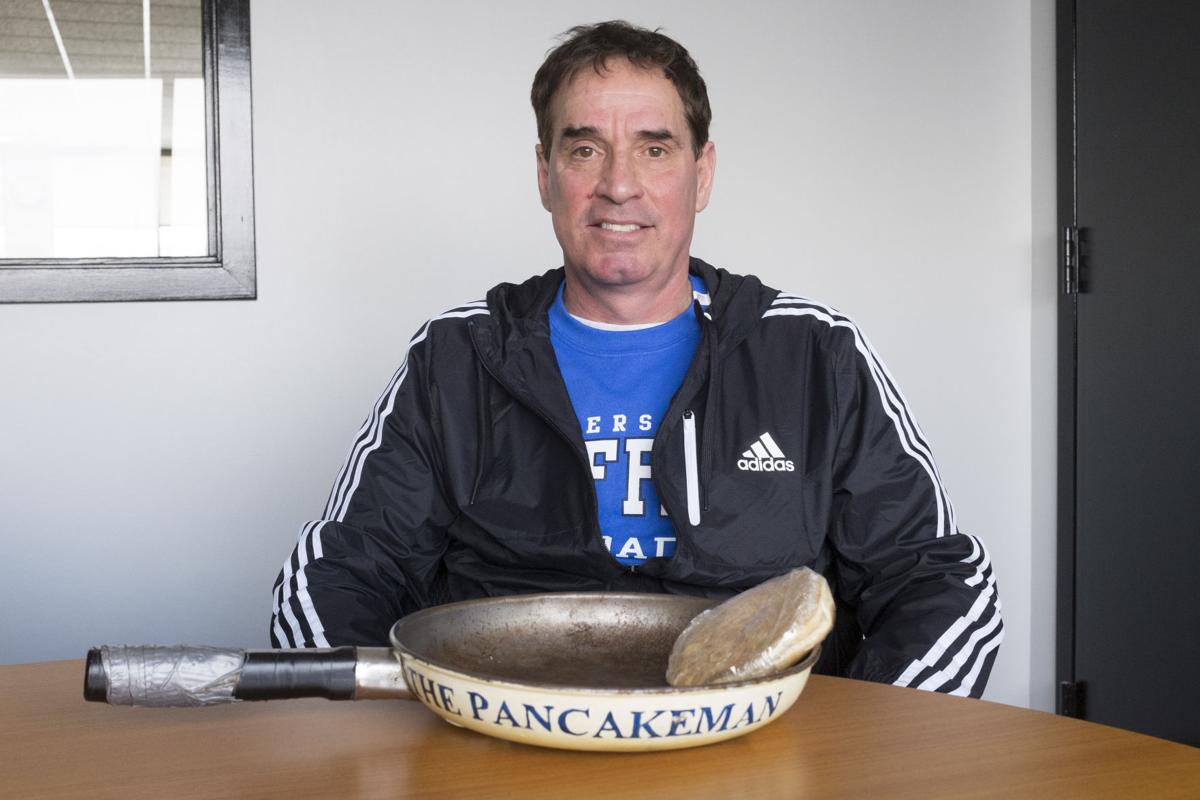 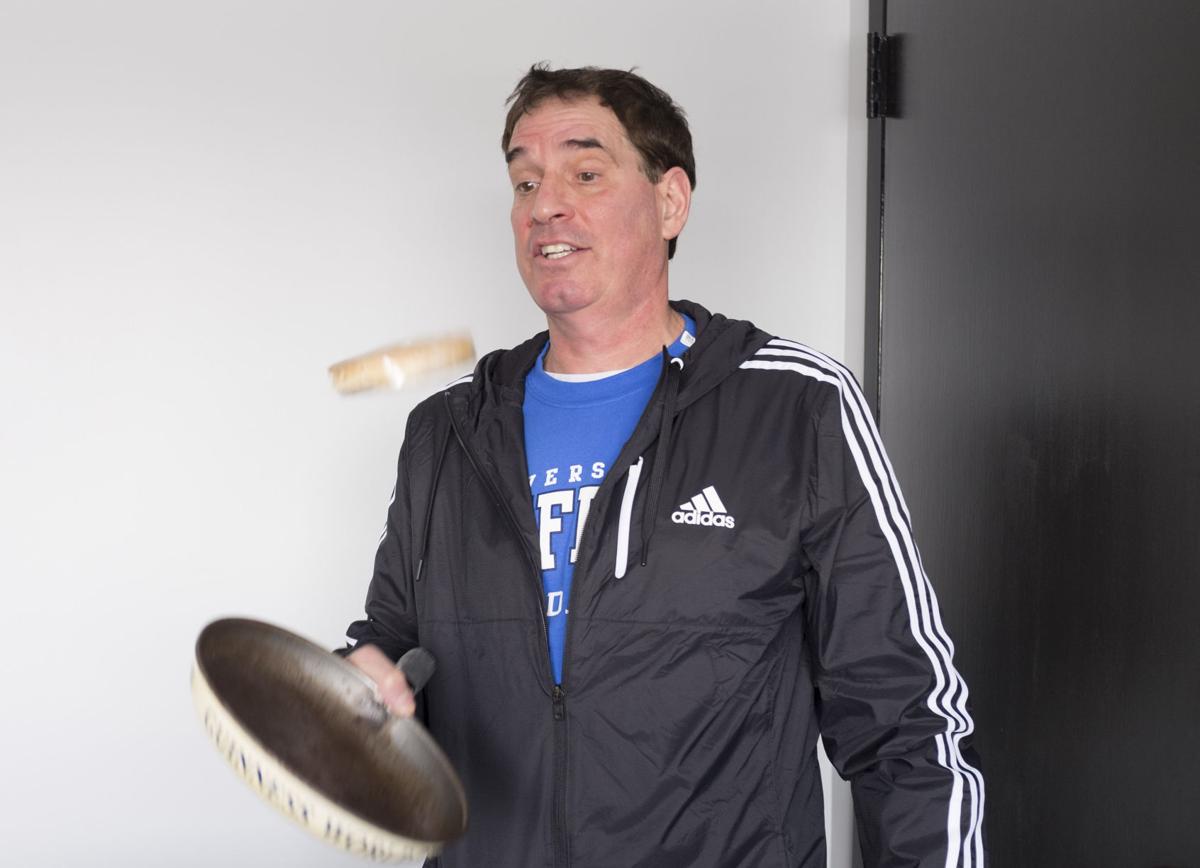 “The Pancakeman,” Mike Cuzzacrea of Lockport, has raised hundreds of thousands of dollars over the past several decades for various local and national charities. The veteran postal carrier says he plans to return to running marathons while flipping pancakes in the near future. 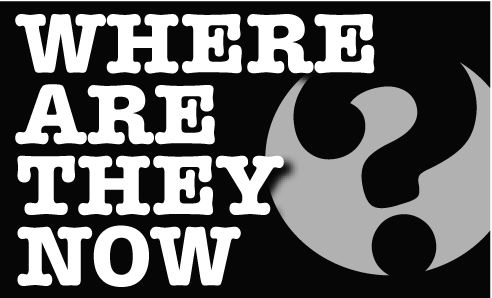 “The Pancakeman,” Mike Cuzzacrea of Lockport, has raised hundreds of thousands of dollars over the past several decades for various local and national charities. The veteran postal carrier says he plans to return to running marathons while flipping pancakes in the near future.

When Dominic “Mike” Cuzzacrea glanced at the back of a box of Aunt Jemima pancake mix in his kitchen 20 years ago, he found a recipe for personal success that would change his life.

Cuzzacrea, Lockport’s self-made “Pancakeman,” talks fondly about his days as a national spokesman for Aunt Jemima that took him to marathons, children’s hospitals and speaking engagements across the United States and Canada. His famous pancake flips while running marathons landed him not just a permanent place in the Guinness Book of Records, but a memorable appearance on the Tonight Show With Jay Leno.

“Every single day, even today, somebody mentions something about my days flipping pancakes,” said Cuzzacrea, a mail carrier for the past 28 years.

“I’m extremely proud of the fact that I’ve helped raise more than $65,000 in charitable causes,” he said. “When you see the sick kids and you go to the hospitals to meet these kids — with wires and needles sticking out of their bodies — and you jump around in their beds and you see the smiles on their faces and you look over and see their parents crying — that’s what kept me going all those years, the kids.”

Cuzzacrea, a 1978 graduate of Newfane High School, husband of Julie and proud father of four, said his life-changing moment came about as the result of a fundraising effort he was involved with in the mid 1980s.

“I ran a 50-mile race for a liver transplant patient and raised $7,000 for a young girl named Melissa,” Cuzzacrea said. “When I realized I could raise money for charitable causes, I grabbed the Guinness Book and searched for a record I could break that could help me raise money at the same time. The pancake record was there and it was old.”

After numerous phone calls to Guinness headquarters in Great Britain, Cuzzacrea learned that there were several “rules” that made the record attempt feasible.

“They said, ‘There’s no way you’re going to run 26.2 miles, flipping a pancake 5,000 times, that isn’t going to make that pancake fall apart,’” Cuzzacrea said. “There’s a special technique for the pancakes. ... When you make them for a marathon, they have to be wrapped in Saran Wrap with weather stripping because they have to go through 5,000 to 6,000 flips over 26.2 miles, plus consider the elements of wind and rain. The pan has to weigh one pound, eight ounces and the marathon pancake has to weigh at least two ounces at the end of the race. And if your Gatorade gets into that frying pan, boy are you in a lot of trouble.”

Cuzzacrea, who flipped his pancake about once every 1.8 seconds while running a marathon, said he never greased his frying pans because that made it even more difficult not to drop the pancake.

“One time, in Cleveland, I sprayed the pan and the pancake was sliding everywhere,” he said. “And that was the most drops I ever had in a single marathon — four. I’ve had eight races that I never dropped the pancake and eight others that I dropped it only once.”

Cuzzacrea said he “hit a wall” — a big hill, actually — in his first pancake flipping marathon attempt in Erie, Pa.

“It took me three years to break the first record and I didn’t do it at the Erie rolling course. I did it right here in Buffalo in 1990,” he said.

“What was really cool is, that day I was living at 622 Davison Road in Lockport, I stayed in room 622 of the Marriott Hotel the night before and my record run time that day was 3:06:22. ... my wife (Julie) and sister were screaming. I flipped it one last time over the clock at the finish line and the people went crazy.”

Nine years later, Cuzzacrea would break that Guinness record while running in the Casino Niagara International Marathon with a personal-best time of 3:02:22.

Once, after competing in the Los Angeles Marathon and attracting quite a lot of attention, Cuzzacrea said he received a call from Jay Leno’s office.

“They called me and said they wanted me on the show. They said, ‘Jay Leno’s looking for you.’ I didn’t really think it would happen ... . I was golfing the next day and they called. They had a limousine pick me up within the hour. I asked, ‘How many people are going to be watching this?’ and they said, ‘Oh, about 17 million.’”

“They were both really great to me. Alan Thicke came knocking on my door and took some pictures with me in the dressing room,” Cuzzacrea said. “I reminded him of the talk show he once had in Toronto that I used to watch and he said, ‘You’re a lot older than you look.’ He was a class guy.”

Cuzzacrea sent a copy of a videotape of his appearance on the Tonight Show to the Aunt Jemima company, after getting the address from the back of a box.

“They called me up and flew me to St. Louis to meet all the CEOs and big shots and then I signed a contract. Pretty soon, people were picking me up at airports and driving me around everywhere.

“I got a phone call before the LA Marathon and they said there’s a one-mile fun run before the marathon and would I be interested in participating? They had all these poverty-stricken kids in the fun run and they wanted me to run with them.

“Well, the guy firing off the pistol to start the race was Muhammad Ali. I knew I had to come up with something that he’d like, so I came up with the words, ‘Float like a butterfly, sting like a bee. I’m flipping pancakes with Muhammad Ali.’

Soon, the West Coast became an annual trip for the Pancakeman, who did promotional work not for Aunt Jemima, International House of Pancakes and the Food Network, as well as an appearance on the Today Show.

“I think everyone loved the charitable aspect of what I did,” he said.

Eventually Cuzzacrea was being approached by other marathon competitors, who appreciated the positive press he gave the sport. Among his biggest supporters over the years was runner Henry “Bill” Rodgers (Boston Marathon champion 1975, 1978-1980, New York City Marathon champion 1977-1980).

“I asked Bill for his autograph one time and he said, ‘I should be asking you for your autograph,’” Cuzzacrea said. “I was on the race brochure that year.”

Another fond memory comes from Cuzzacrea’s participation in the New York City Marathon in 2001, a few months after Sept. 11.

“I met Rudy Giuliani and Regis Philbin. ... I was running and flipping pancakes and I could see the Statue of Liberty between the pancake and the pan as I was flipping it,” he said. “Unforgettable.”

One might think flipping a pancake would drive Cuzzacrea to the “back of the pack” in marathons, but quite the opposite is true. On average, Cuzzacrea finished them in the top three percent. Once, in Rochester, he finished sixth overall among 400 other competitors who weren’t flipping pancakes. Over the years, he went on to break four Guinness pancake flipping records, including two that involved marathons.

Also among Cuzzacrea’s most memorable running experiences, he carried the Olympic Torch along West Avenue, Lockport, when the torch was en route to the 1996 Summer Games in Atlanta; and he pushed his twin, infants sons in a stroller throughout the 26.2-mile course in a 2004 marathon.

Today, the twins, Andrew and Connor, 13, are avid long distance runners as well, and they have their dad thinking about reviving Pancakeman.

Now 56 years old, Cuzzacrea said he has enjoyed a break from marathon running and pancake flipping, but he yearns to return.

“I needed a break, especially after four kids, because there’s so much time and commitment involved. It’s 100 percent or nothing and I train very hard,” he said. “My kids keep asking me to do it again. I think I will. ... It’s just a matter of when and where I’m going to break more records. I would love to raise more money for local charities.”

In the meantime, Cuzzacrea makes several appearances each year at the Guinness Book of World Records Museum in Niagara Falls, Ontario, where one of his pans is on permanent display.

As for the current status of his relationship with Aunt Jemima?

“I still make pancakes every Sunday, pretty much,” he said.