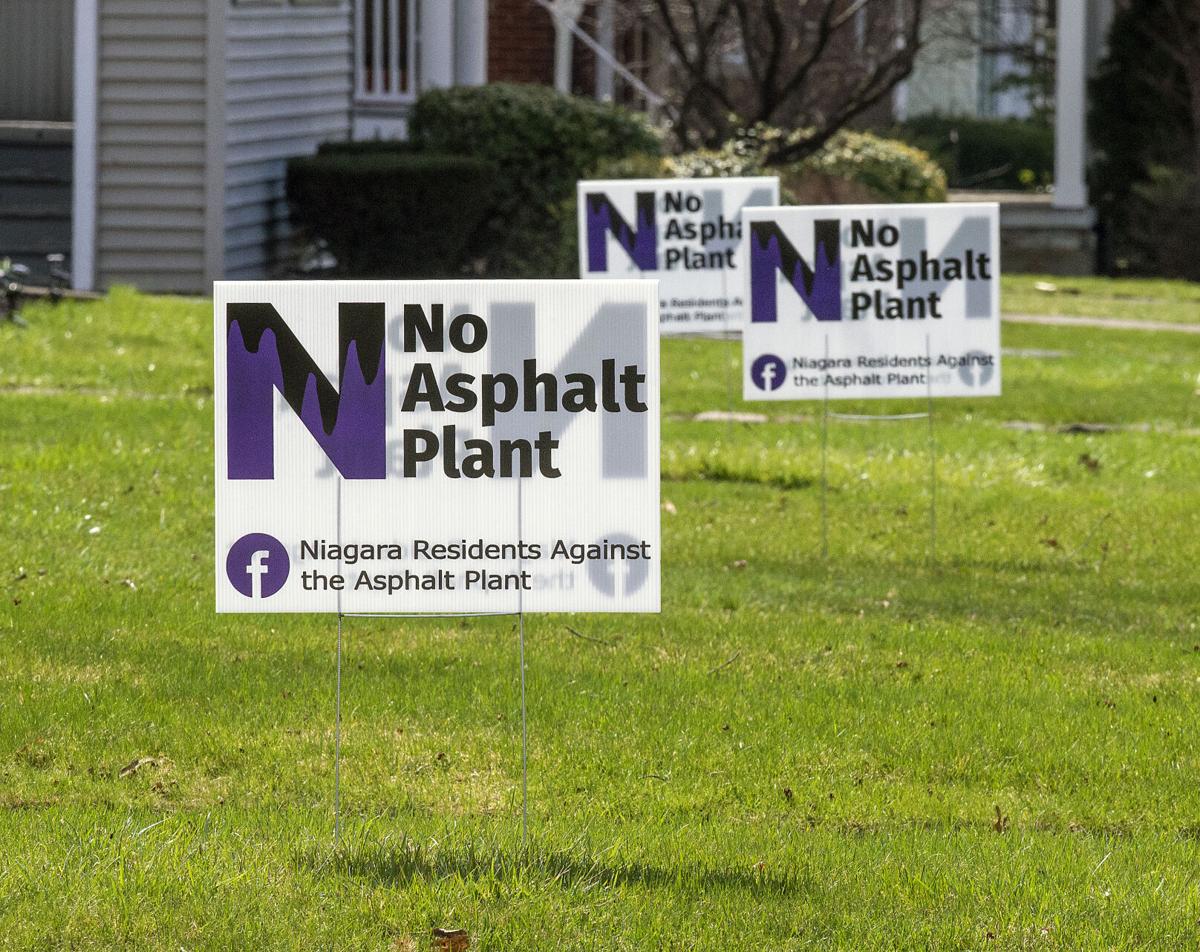 Signs of community opposition to AL Asphalt's plan to construct a plant in the Town of Niagara are everywhere these days, including front yards in Niagara Falls. (James Neiss / staff photographer) 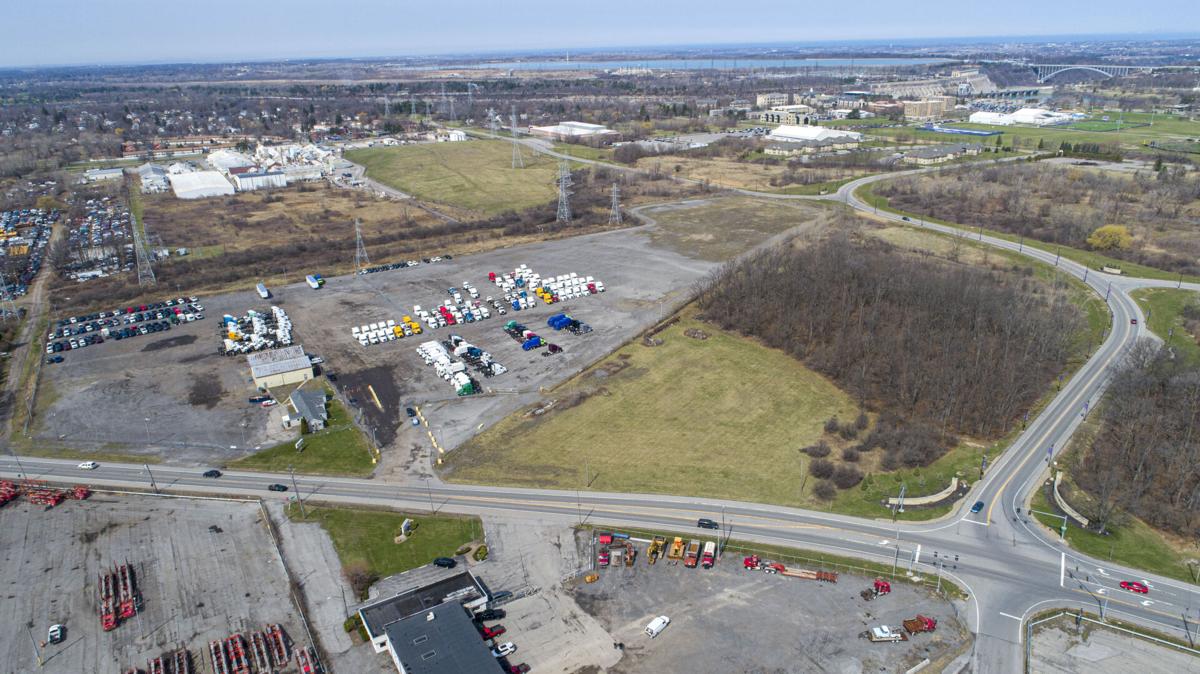 An aerial view of the site where AL Asphalt wants to build an asphalt plant, at 4660 Witmer Road in the Town of Niagara. (James Neiss / staff photographer)

Signs of community opposition to AL Asphalt's plan to construct a plant in the Town of Niagara are everywhere these days, including front yards in Niagara Falls. (James Neiss / staff photographer)

An aerial view of the site where AL Asphalt wants to build an asphalt plant, at 4660 Witmer Road in the Town of Niagara. (James Neiss / staff photographer)

A wave of public opposition to a proposed asphalt plant near Niagara University has resulted in the Town of Niagara town board deciding to reconsider its vote on the project at a special meeting tonight.

The board, which approved the plans for a plant proposed by AL Asphalt at 4660 Witmer Road this past July, will hold a special meeting following a 6:30 p.m. work session and is expected to vote to send the plan to the Niagara County Planning Board for further consideration.

Nearly 2,500 people signed an online petition against the proposed plant at www.noasphaltniagara.com, created by a citizens group founded by Paul Kudela, a Niagara Falls Board of Education member. The group is called Niagara Residents Against the Asphalt Plant.

Kudela, who also works as a Niagara Falls Police detective, said he began advocating against the plant, which would be about a half-mile from Niagara Falls, because of a deep-rooted sense of obligation to the city where he was born and raised. He likened worries about the health impacts of such industrial activity to one more environmental challenge for area residents.

Kudela said he was tired of watching family, friends and co-workers leave Niagara Falls to live elsewhere due to declining living conditions, and he is worried about the potential further negative health conditions that might be created by the plant.

“Everybody’s got the same feeling. How did we get so bad, where did we go wrong and how do we move on and who is going to help?,” he said.

Tonight’s vote is a response to community outrage over the proposed plant following recent announcements from the state Department of Environmental Conservation that it’s seeking public comments on an air quality permit applications filed by plant representatives. The application notes the plant would hire six or seven employees and produce about 150,000 tons of hot asphalt from April to November, and further notes a plan to keep carbon monoxide emission below 100 tons a year and emission of volatile organic compounds below l50 tons a year. The DEC has extended the period for public comment to May 3. (See the breakout box for more information.)

Kudela said the Board of Education passed a resolution against the proposed plant due to its proximity to five schools in the district on March 25.

“I don’t want to point fingers,” he said, noting that his citizens group is simply requesting to join the conversation about the proposed plant. “We all, the city, the school board, and the residents, were left out of the conversation.” Local politicians from both major parties have offered support of his group’s request for more discussion on the idea, he added.

“The proposed asphalt plant just outside of Niagara Falls failed to seek approval from the County planning board, and this necessary step in the process is vital to have additional review, and an additional opportunity for public comment,” Voccio’s statement said. “Process matters. Transparency matters. This project should follow the proper steps, and the public should have the right to weigh in on the matter to the county planning board.”

Niagara Falls Councilman Bill Kennedy, a Democrat, has written a resolution opposing the plant that is expected to be put to a vote by the city council at its next meeting April 14.

“The reality of it is, Niagara Falls is not going to be a beneficiary of this plant in any way, except for the possibility of a microscopic piece of Niagara County sales tax,” Kennedy said. “I’m tired of Niagara Falls being a dumping ground for bad ideas. ... It’s a terrible idea in my opinion.”

Bringing academic and institutional heft to the opposition is Niagara University’s president, Rev. James J. Maher, C.M., who sent a letter to the university community about the proposed plant.

“We stand in opposition to this project for our entire community,” Maher said in the letter, asserting such plans would counter recent environmental enhancements that are beginning to improve the region, including redevelopment of green spaces, restoration of natural habitats and the reconstruction of Niagara Falls State Park.

“Our region has suffered from environmental degradation for more than a century. Whether it is Love Canal, Occidental or Stauffer Chemical landfills, or the Buffalo Avenue chemical companies, the people of Niagara Falls and towns of Niagara and Lewiston have borne an unfair burden of pollution and toxic dumping, and it is irresponsible to consider moving our region backward with this type of seasonal asphalt manufacturing facility,” Maher wrote.

Maher added that the university has gathered a team to examine the issues surrounding the proposed plant and also plans to host an event denouncing the plant.

AL Asphalt tried unsuccessfully to obtain a permit for a plant in the Town of Hamburg before approaching the Town of Niagara. Calls to AL Asphalt and the company’s legal representation for comment were unanswered as of Tuesday.

If the proposal is sent to the county planning board, that will fulfill an inter-municipal agreement between the county and the town to refer projects that are adjacent to other municipalities in the county, according to Michael Casale, Niagara County economic development commissioner.

Town of Niagara Supervisor Lee Wallace said when the board approved the proposed plan in July 2020, it was because the members had been led to believe the plan did not require referral to the county planning board.

“In light of the new information, we’re going to rescind everything, basically start over, send it to the county planning board and we’ll go from there,” Wallace said.

He added that anyone who wishes to speak on the subject can do that at the April 20 town board meeting but noted the item likely won’t be on the agenda because the board will already have moved on the matter.

Meanwhile, older residents may be left out of the process due to Covid-related restrictions on public gatherings that force observers and speakers to participate digitally, via Zoom or an open phone line.

Frank Kolbmann of Holland, N.Y., plans to be in Niagara Falls tonight to help his parents attend the meeting digitally. He called the digital meetings “evasive,” because they ostracize members of the senior citizen community who are most susceptible to air quality problems from industrial operations, noting that many seniors don’t know how to use digital programs like Zoom.

Kolbmann predicted that even if the board votes to send the matter to the county planning board, the proposed plant might still become a reality.

“It’s far from over,” he said, noting that plant representatives may decide to legally fight to build the plant in Niagara, as they tried, unsuccessfully, to do in Hamburg. “They’ve already got their practices and procedures down from the Southtowns attempt.”