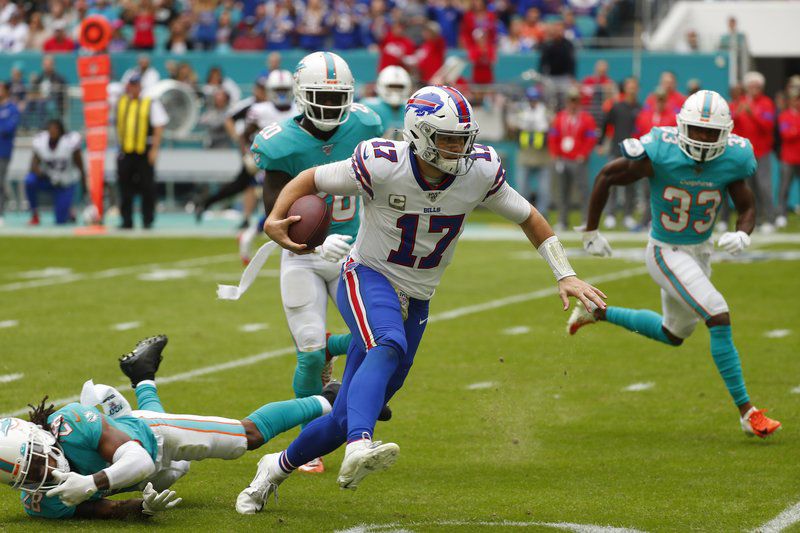 The Associated PressBuffalo Bills quarterback Josh Allen (17) scrambles for yards during the first half of Sunday’s win over the Miami Dolphins in Miami Gardens, Fla. 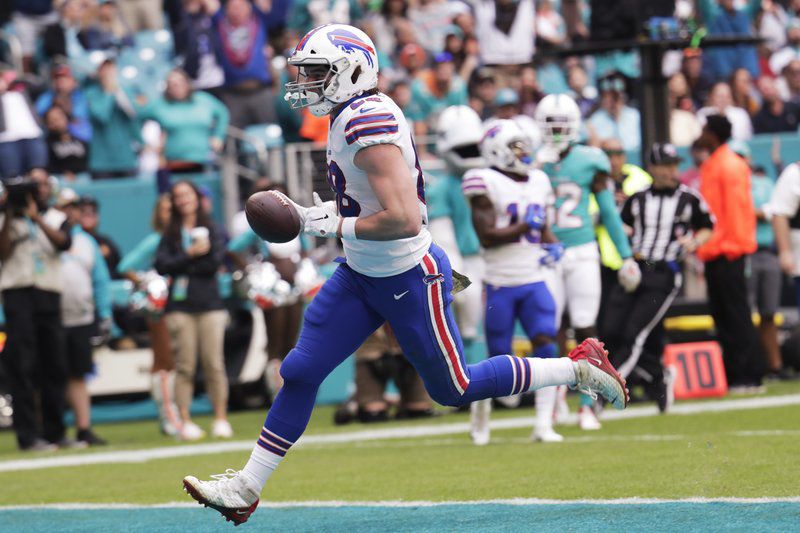 The Associated PressBuffalo Bills tight end Dawson Knox (88) runs for a touchdown during the first half of Sunday’s game against the Miami Dolphins in Miami Gardens, Fla. 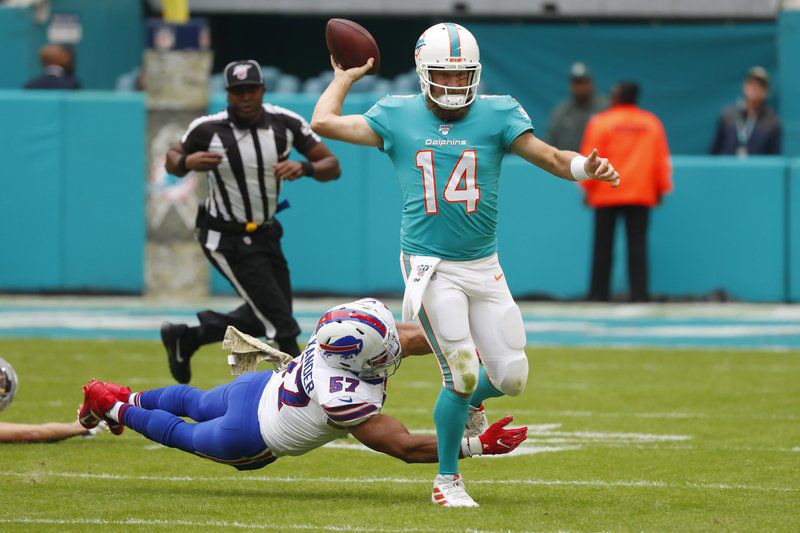 The Associated PressBuffalo Bills outside linebacker Lorenzo Alexander (57) attempts to tackle Miami Dolphins quarterback Ryan Fitzpatrick (14), during the first half of a game Sunday in Miami Gardens, Fla.

The Associated PressBuffalo Bills quarterback Josh Allen (17) scrambles for yards during the first half of Sunday’s win over the Miami Dolphins in Miami Gardens, Fla.

The Associated PressBuffalo Bills tight end Dawson Knox (88) runs for a touchdown during the first half of Sunday’s game against the Miami Dolphins in Miami Gardens, Fla.

The Associated PressBuffalo Bills outside linebacker Lorenzo Alexander (57) attempts to tackle Miami Dolphins quarterback Ryan Fitzpatrick (14), during the first half of a game Sunday in Miami Gardens, Fla.

MIAMI GARDENS, Fla. — The Buffalo Bills showed again they can beat a bad team, which won’t help them in the playoffs.

Josh Allen tied a career high with three touchdown passes and ran for another score Sunday to help Buffalo complete a season sweep of the Miami Dolphins by winning 37-20.

“We want to put together a good second half of the season,” Allen said, “and put ourselves into position to get into the playoffs.”

The victory gave the Bills (7-3) their best 10-game record since 1999. But a recent regression — they had lost two of their past three games — and a soft schedule has left doubts about whether they deserve to make the postseason for only the second time in 20 years.

Through Week 10, Buffalo’s wins had come against opponents with a combined record of 12-44.

The Bills looked like a contender Sunday, at least compared to the Dolphins (2-8).

“They had the eye of the tiger,” coach Sean McDermott said.

“That was our best game,” said John Brown, who caught two touchdown passes. “But we haven’t played our best game yet.”

Miami was unable to extend a modest a two-game winning streak and lost to Buffalo for the fifth time in the past six meetings.

“I thought we’d come in and be more competitive,” said the Dolphins’ Ryan Fitzpatrick, who threw for 323 yards.

Allen’s TD tosses covered 40 and 9 yards to Brown, and 23 yards to Dawson Knox. Allen also scored on an 8-yard run, and he had a 36-yard run to set up a field goal.

Miami couldn’t keep up against Buffalo’s smothering front. The Bills totaled a season-high seven sacks and allowed only 23 yards rushing.

“The game plan was great, moving us around,” linebacker Lorenzo Alexander said, “and they didn’t’ handle it well.”

Allen went 21 for 33 for 256 yards without a sack or turnover, and his passer rating of 117.7 was a career high. He extended his streak of passes without an interception to 163.

Brown totaled 137 yards receiving, the most by a Buffalo player in nearly three years, on nine catches. The Bills netted a season-best 424 yards, and their point total was also a season high.

The Bills scored on their first four possessions to take a 16-0 lead, and at that point they enjoyed a 211-24 advantage in total yards.

Jakeem Grant scored for the Dolphins on a 101-yard kickoff return — his fourth career kick or punt return for a score. Grant also scored on a 7-yard run on a jet sweep.

DeVante Parker set up Miami’s first touchdown by turning a short pass into a 50-yard gain.

A gamble worked but didn’t pay off when Dolphins rookie coach Brian Flores tried an onside kick late in the second quarter after his team scored to trail 16-7.

Kicker Jason Sanders recovered. But on the next play, receiver Allen Hurns lost a fumble at the Buffalo 25.

South Florida native Devin Singletary, who rushed for 75 yards, estimated he had about 100 friends and relatives at the game. Bills colors filled several sections of the stadium.

• Bills: T Ty Nsekhe (right ankle) was carted off in the third quarter. ... S Siran Neal (concussion) sat out the second half.