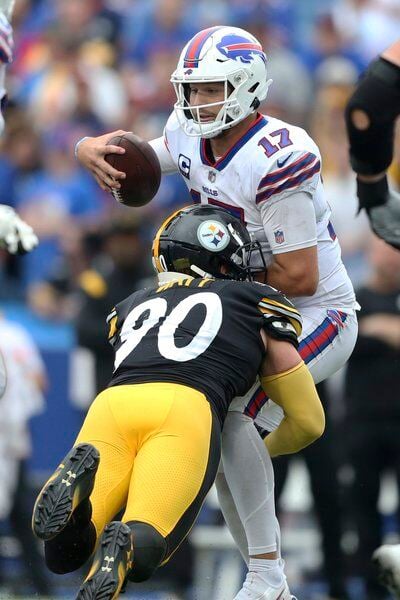 Buffalo Bills quarterback Josh Allen (17) is sacked by Pittsburgh Steelers outside linebacker T.J. Watt during the second half of a game Sunday at Highmark Stadium. 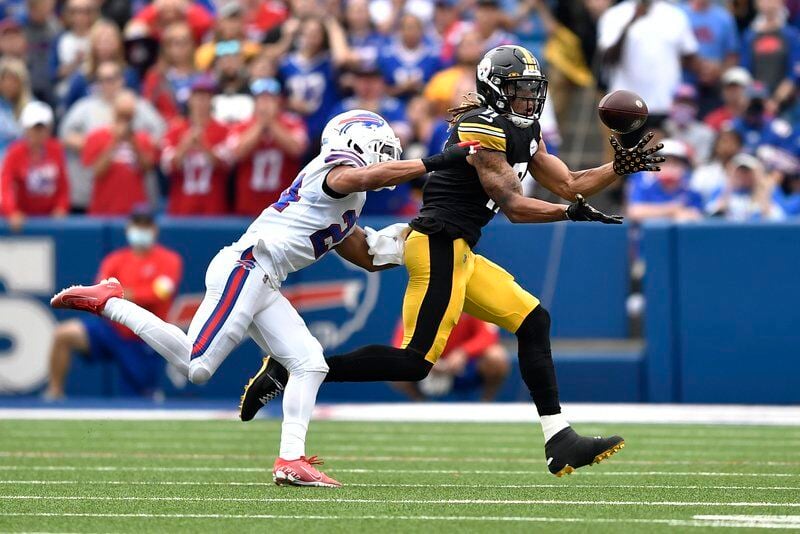 Buffalo Bills quarterback Josh Allen (17) is sacked by Pittsburgh Steelers outside linebacker T.J. Watt during the second half of a game Sunday at Highmark Stadium.

Defiant as they may have sounded, the sky-high expectations the Bills had entering the season took a significant hit following a 23-16 loss to the Pittsburgh Steelers in a showdown of defending AFC division champions.

Though the defense was sound in limiting the Steelers to 16 points (Pittsburgh also scored off a blocked punt), it was the Josh Allen-led offense that proved pedestrian.

There was a palpable sense of anticipation leading up to Sunday’s season opener. For the fir…

Allen completed 30 of 51 passes for 270 yards and a touchdown but was out of sync, with his 21 incompletions matching the second-highest total of his four-year career.

“Obviously it’s not what we hope for, what we strive for, how we want to start the season,” Allen said. “That’s why we’re playing 17 (games). We’re not expecting to win them all. We go into each game expecting to win, but we understand that it’s a long season. A lot to learn from this tape, honestly starting with me.”

The Bills had no answers for the Steelers defense and its relentless T.J.-Watt led pass rush. Despite using only three or four rushers at the line of scrimmage, the Steelers repeatedly made life uneasy for Allen, who was forced to move and scramble out of the pocket. Buffalo’s offensive line never found its footing and had six holding penalties.

“That’s just one of those things that will come down to accountability,” center Mitch Morse said. “The unfortunate thing is that most of the holding calls came with chunk plays. So not only did we go backward, but this game is a game of momentum, and for the most part we kind of shot ourselves in the foot.”

The offense misfired on the type of plays it became known for in 2020.

Early in the game, Allen overthrew a wide-open Emmanuel Sanders on a deep ball that would have gone for a touchdown. Allen also missed Stefon Diggs deep.

Then came what appeared to be a poorly designed fourth-and-1 attempt to open the fourth quarter in which Matt Breida caught a lateral and lost 7 yards, which immediately led to Ben Roethlisberger putting the Steelers ahead for good with a 5-yard touchdown pass to Diontae Johnson.

On Buffalo's next possession, Sanders had the ball punched out of his hands for what would've been a 20-yard gain, and the Bills drive ended with Watt dropping Allen for a 6-yard loss on third down. Matt Haack's punt was then blocked by Miles Killebrew, with Ulysees Gilbert scooping up the loose ball and returning it 9 yards for a touchdown.

“Whether it be first-game nerves or jitters or feeling stuff with my feet, I’ve got to play better, I’ve got to be better,” Allen said. “I know that. Again, we’re going to learn from this. We’re not going to panic. It’s 16 games left. We know what we need to do. We’re going to look at the film and work and strive to get better.”

One positive for the Bills was their defensive performance.

After Buffalo’s defense largely struggled in 2020, the Bills held Roethlisberger in check for much of the game. The Steelers had just 53 yards and three first downs in the first half..

“Overall, you hold a team to 16 points if you take away the blocked punt,” coach Sean McDermott said. “I thought overall defensively, and they were in some tough positions, they played hard and they did some good things.”

After repeatedly showing the ability to overcome adversity and bounce back last season, the Bills believe they have the right mindset and group of players to do it again.

“We’ve been here before,” McDermott said. “It’s one game. I know the expectations are high and that comes with the territory. ... Give credit where credit’s due. Mike Tomlin and his team came in here and outcoached us and outplayed us, and I give them credit. We’ve got to learn from this as coaches and as players and get ourselves ready to go.”