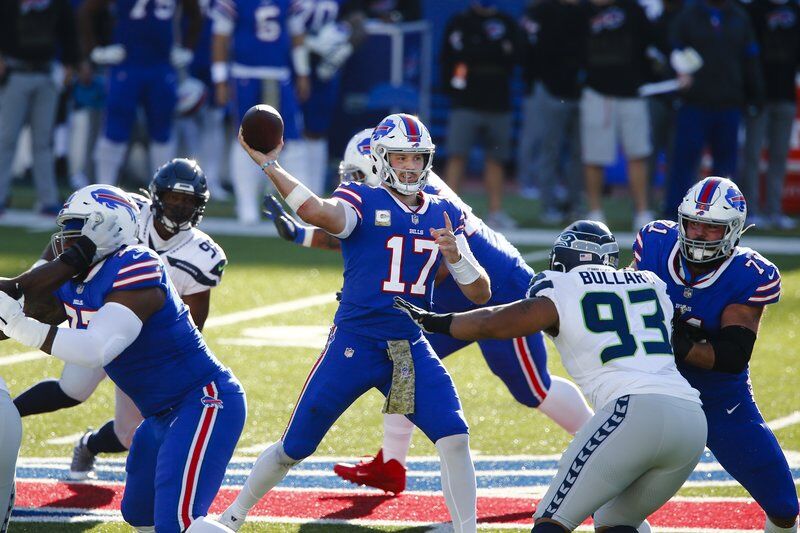 Buffalo Bills quarterback Josh Allen looks to throw a pass during the first half of a game Sunday against the Seattle Seahawks in Orchard Park. 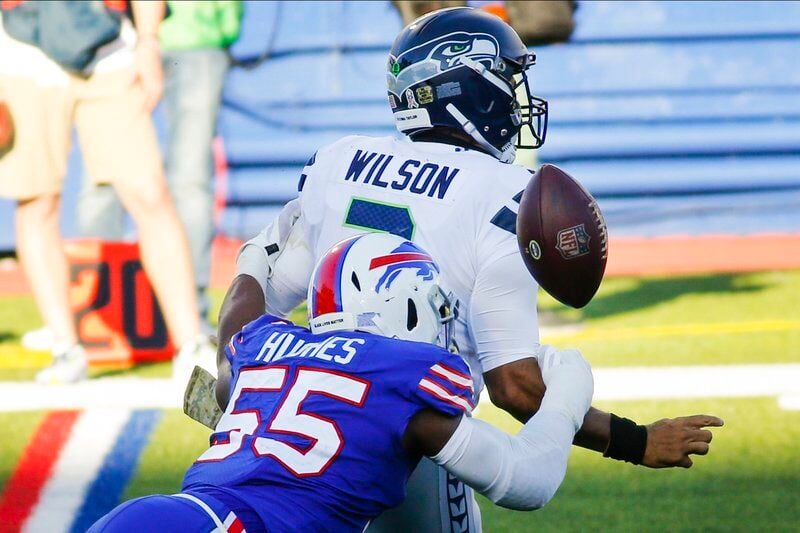 Buffalo Bills defensive end Jerry Hughes (55) knocks the ball away from Seattle Seahawks quarterback Russell Wilson during the second half of a game Sunday in Orchard Park. 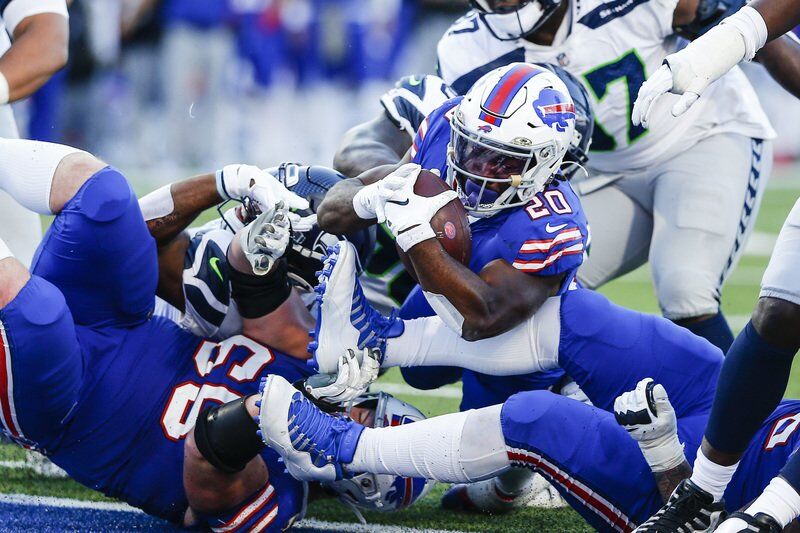 Buffalo Bills' Zack Moss (20) rushes for a touchdown during the second half of Sunday's game against the Seattle Seahawks in Orchard Park.

Buffalo Bills quarterback Josh Allen looks to throw a pass during the first half of a game Sunday against the Seattle Seahawks in Orchard Park.

Buffalo Bills defensive end Jerry Hughes (55) knocks the ball away from Seattle Seahawks quarterback Russell Wilson during the second half of a game Sunday in Orchard Park.

Buffalo Bills' Zack Moss (20) rushes for a touchdown during the second half of Sunday's game against the Seattle Seahawks in Orchard Park.

ORCHARD PARK — Josh Allen set aside his grief over the death of his grandmother to enjoy one of the most productive games of his three-year career.

Though Allen made no mention of his loss immediately following a 44-34 win over the Seattle Seahawks on Sunday, coach Sean McDermott revealed Allen's grandmother had died a day earlier while praising his quarterback’s resolve.

“He said he wanted to play and you know, he just felt like was going to have to compartmentalize for the better part of 24 hours to get through the game, and that’s what he did,” McDermott added. “It was a big, big win, and a great, great thing for him to play like he played. Just a mentally tough man.”

Allen got the Bills' offense off to such a productive start, not even Russell Wilson and the high-scoring Seahawks could keep pace. Starting with a three-play, 45-yard scoring drive, Allen threw touchdown passes on three of Buffalo’s first four possessions. He later added a rushing TD.

He finished 31 of 38 and equaled his career best with 415 yards passing. The AFC East-leading Bills are 7-2 through nine games for the first time since 1993, a season that ended with the Jim Kelly-led Bills making their fourth consecutive, and final, Super Bowl appearance.

Allen deflected any praise, noting the defense forced Wilson to turn over the ball four times, and special teams contributions.

“As a whole team, we took care of business today,” Allen said. “Sitting here, 7-2, we’re excited with what we can do and how we can play.”

Allen’s 24 completions and 282 yards passing in the first half alone were both the most by a Bills player since at least 1991.

The Seahawks (6-2) blew an opportunity to match their best record through eight games. They were 7-1 in 2013.

“What I will tell you is I don’t recognize that game. We haven't seen us look like that, and it’s a game that I don’t have any place in my brain for it,” said Seahawks coach Pete Carroll, who confirmed after the game that he has signed a multiyear contract extension. “We just don’t turn the ball over like that, but we did today and they capitalized on all of it and just made us pay.”

Wilson finished 28 of 41 for 390 yards with two touchdowns, but has seven turnovers in the past three games. He threw a season-worst three interceptions in a 37-34 overtime loss to Arizona two weeks ago.

The turnovers weren't the only problem. Seattle became the NFL’s sixth team to score 25 or more points in each of its first eight games, but the defense surrendered 420 yards — the fifth time this season an opponent has topped 400 yards.

The 44 points allowed were the most in Carroll’s 11 seasons in Seattle and the most for the franchise since a 48-10 loss at Green Bay on Dec. 27, 2009. It was just the eighth time since Week 9 of the 2011 season the Carroll-led Seahawks have lost by 10 points or more.

“We just got to be cleaner,” Wilson said. “We scored 34 points. We’re a pretty good offense. But I think that we can be better.”

Though Buffalo never trailed, the game was decided in the opening minutes of the fourth quarter, when the Bills scored touchdowns over a span of 2:49 to open a 41-20 lead. Zack Moss scored on a 1-yard run, one play after Allen converted a third-and-16 by hitting John Brown on a 33-yard catch-and-run.

Facing third and 25 on Seattle’s next possession, Wilson threw his second interception. Tre’Davious White broke off covering tight end Jacob Hollister to jump in front of a pass intended for DK Metcalf. White returned it to the Seattle 3, and Allen scored on a sweep on the next play.

Wilson provided the Seahawks a breath of life with a 55-yard touchdown pass to David Moore. But on Seattle’s next possession, linebacker A.J. Klein burst around the left side of the line untouched and blindsided Wilson to force the fumble, which he recovered at Seattle’s 19 with 6:30 remaining.

Starting Bills linebacker Matt Milano will miss at least three weeks after being placed on injured reserve due to a partially torn pectoral muscle.

The Bills made the move Saturday, one day after Milano had been ruled out for Sunday's contest. Milano missed two games after getting hurt, and saw limited playing time in the two games since he returned.

Milano is required to spend at least three weeks on injured reserve, though could miss only two games with Buffalo having a bye week after playing at Arizona next weekend.

In other roster moves, Buffalo activated backup linebacker Del'Shawn Phillips from IR after he missed five games with a quadriceps injury. Cornerback Dane Jackson and receiver Jake Kumerow were elevated from the practice squad.

Seahawks TE Will Dissly and OG Jordan Simmons knelt for the national anthem, while LB Jordyn Brooks, LB Shaquem Griffin and FS Quandre Diggs sat on the bench. Carlos Dunlap stayed in the locker room before joining the team at the conclusion of the anthem.

For Buffalo, the entire Bills team continued its season-long decision to stay in the locker room for the anthem.

The temperature of 69 degrees at kickoff set a Bills record for the warmest home game in November or later at Orchard Park or Buffalo. The previous record of 62 degrees was set in 2013.

• Seahawks: At the Los Angeles Rams next Sunday in the first of two meetings between the NFC West rivals.

• Bills: At Arizona next Sunday.