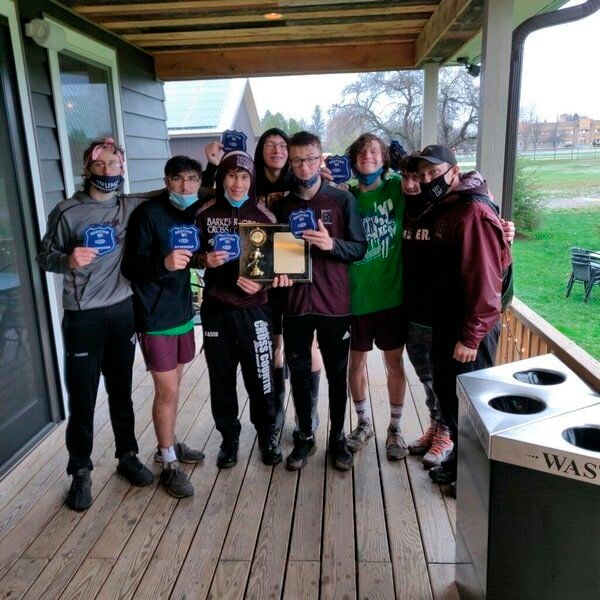 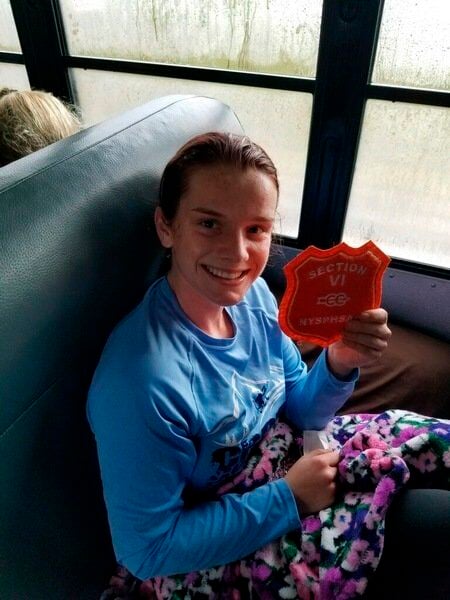 Photo courtesy Paul DerSarkissianBarker's Carla Stoloski poses with her sectional patch Sunday after accounting for a top-10 point total in the Section VI Class D girls cross country race in Bemus Point. In a normal season, Stoloski would have qualified for the NYSPHSAA meet.

Photo courtesy Paul DerSarkissianBarker's Carla Stoloski poses with her sectional patch Sunday after accounting for a top-10 point total in the Section VI Class D girls cross country race in Bemus Point. In a normal season, Stoloski would have qualified for the NYSPHSAA meet.

BEMUS POINT — After a six-year hiatus, Baker boys cross country finally reclaimed the Section VI Class D title Sunday, its first since closing a dominant run of championships from 2007 to 2014.

Barker head coach Paul DerSarkissian has seen all of the Raiders' 10 sectional titles since 2004. Half of his seasons at the helm have ended in sectional championships. This year, even with a roster cut to 15 from Barker's normal 30, the season ended the way most have in DerSarkissian's tenure.

"I would've never guessed way back on that first day (in 2001) when I literally had seven runners," said DerSarkissian, who led the Barker boys to state titles in 2009 and 2011, as well as four other top-two places. "And I would've been one of the faster ones and I'm not fast. For the program to grow into the empire, if you will, that it has turned into, it's just absolutely amazing that we just kind of keep on."

DerSarkissian got a pleasant surprise in the sectional meet, as things were shaken up once his top runner, Mason Allee-Castro, fell on his hip and spiked himself, dropping him down to the team's fourth spot at 19:35.57.

It also helped that Aidan Voss and Bradford Cantrell placed 23rd and 26th, respectively, helping save points against second-place Clymer-Sherman-Panama. Sticking together as a pack throughout the run, the Raiders' top five finishers had splits under a minute apart from each other.

"We'd been on a string of getting a red patch," said DerSarkissian, since Maple Grove won the last five Class D titles. "We didn't want to get another red patch, we wanted a blue patch."

What also motivates DerSarkissian is the future Barker has with an eighth-grade feeder program at the modified level. With a pack of "crazy hungry" runners limited to three meets this season with less than 10 Niagara-Orleans League competitors, DerSarkissian sees more state competitions coming for Barker's Class of 2025.

His message to them? Be the next Sergio Cruz, the former Barker and Niagara University runner who helped the Raiders win states as a freshman.

Barker's girls are oft underrated next to their dominant counterparts, but the Lady Raiders were also strong with a third-place team finish at 84 points. One in particular showed out, as senior Carla Stoloski finished 11th with a run of 23:02.47, contributing nine points overall.

Stoloski earned an orange patch in the process, signifying that she would have been headed to states in a normal year.

Stoloski's progression over the past year was what really caught her head coach's eye. It was one more pleasant surprise to cap things off for DerSarkissian.

"She killed it over the summer and she came into cross country in shape, ready to go," DerSarkissian said. "... A year ago, she wasn't even in the conversation of even going to a state meet."

DerSarkissian remembers how wide Stoloski's eyes got when he told her how close she was to the top heading into the meet. Stoloski wasn't going to let this chance go to waste.

"She's a fighter. And during that race I remember yelling, and I'm getting goose bumps just talking about it," DerSarkissian said. "I was yelling at her, 'You're in the five spot, you've got it.' ... And she finished and she was wobbly, like, way more than ever. ... She was wobbly because she spent it, because she was hungry."