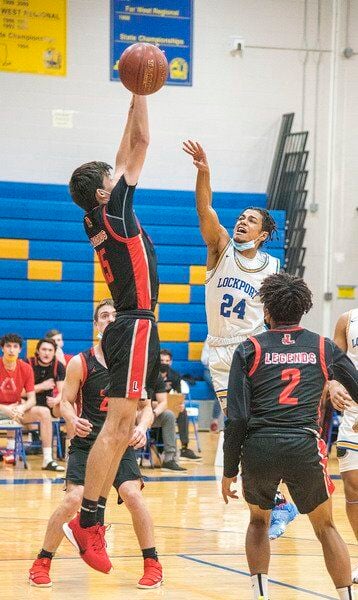 LOCKPORT — If you didn’t know by now, Imario Douglas can ball.

The senior led Class AA’s third-seeded Lockport with a 33-point effort as the Lions took out defending Section VI champion No. 6 Lancaster, 54-40, in Monday’s Section VI quarterfinal at Lockport High School. The Lions (11-3) now await No. 2 Niagara Falls in the AA semifinals, as the Niagara Frontier League rivals are set for a third matchup of the season.

Douglas started and stayed hot, going on a personal 9-0 run to open the game. In fact, the 6-foot-2 swingman scored 20 of Lockport’s 24 first half points, pushing the Lions to a 24-19 halftime lead.

The defense was a major key all evening for Lockport. The Lions held Lancaster (7-8) scoreless for nearly four minutes to start the game, as Lockport allowed a season-low point total and held the Legends to their lowest scoring output of 2021.

The Legends were scrappy throughout, only trailing 35-29 through three quarters despite being without big man Joe Harrington — a major factor on last season’s title team who’s been out since Feb. 22. But once again, it came down to defense for the Lions, who were able to shake off Jackson Jerebko’s 14-point night.

Lancaster cut things to 40-37 with about three minutes left to play. But Douglas and his bunch tightened up defensively, forcing several steals and converting during a 10-0 run from which the Legends never recovered.

Douglas, who also knocked down four treys in the performance, got a compliment of scoring from Kai Tran, who added nine points.

“I thought coming down to the end there, that’s the best defense we played,” said Lockport head coach Dave Gilson.

Gilson was glad to get a little bit of revenge as well, noting how the Legends took a 56-40 win over Lockport last season.

Gilson also thought this was Douglas’ best game overall, as the lengthy wing left his mark just as much on the defensive end as he did offensively. The Lockport head man said his leading scorer looked “unstoppable” in the first quarter, scoring 12 of his 33 points in the period.

But even when Douglas was playing the decoy, Gilson was pleased by how the rest group played their roles.

“To his credit, I thought once they kind of took him out, they kind of just man-to-man and mirrored him,” Gilson said.

“But in that situation, we just put him down on the baseline and we let the other guys step up and they did. We hit a nice 3, Kai Tran got in the middle and then like I said, Mike got (one). So other guys needed to step up and they did. To their credit, too, it became more about the other four that were there once they took Imario out of it, but he had a heck of a game, didn’t he? It was fun to watch.”

Douglas credited his teammates for helping him get into his rhythm, sharing how their aggressive approach in practice has carried over throughout the season. Although he would have liked to see a better showing on the glass, Douglas felt he and Lockport’s defensive efforts were most needed to secure the win.

Now that the Lions are looking ahead to a third bout with the Falls, Douglas wants Lockport to take the right mindset into the outing.

“Just try to beat ‘em again. Just can’t quit, stay motivated,” said Douglas, whose Lions were swept by the Wolverines in the regular season. “Don’t just let the words of peoples’ names put you down and just keep pushing.”

Gilson looks at this third matchup with the Falls as it being a bonus in the aspect of familiarity. Not needing to scout the Wolverines as a new opponent, Gilson anticipates making some adjustments from the last two contests.

“We know their names, they know our names. And last time we played ‘em, it was a little better than the first time,” said Gilson, alluding to the 62-55 loss on March 13. “But they’re extremely athletic, they play hard and ... if we don’t rebound, we’re gonna be in trouble against them, too. So again, we’re familiar, they’re familiar with us, and we’ll see how things go.”

Lockport travels to the Falls on Wednesday for the AA semifinals. The game time is still to be determined.