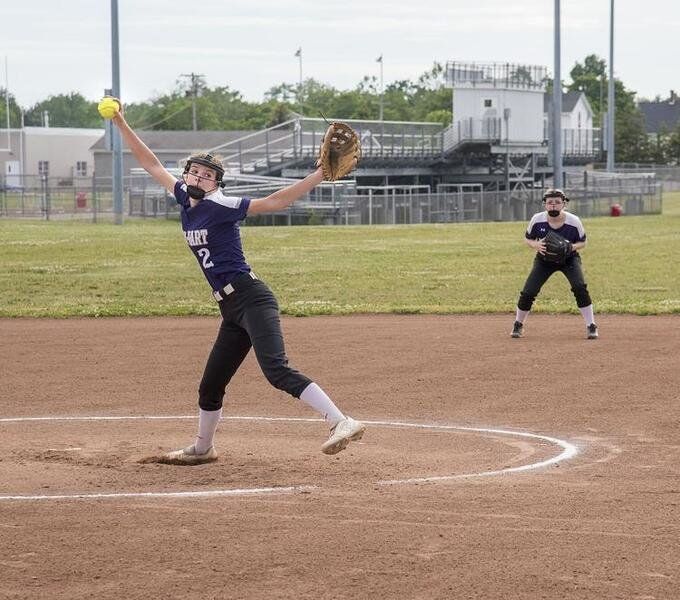 Royalton-Hartland softball pitcher Reanna Perkins winds up during game action against Newfane, Monday at Roy-Hart. The daughter of former NU baseball standout and MLB draft pick Gerry Perkins, Reanna has become a star in her own right for the Lady Rams. (James Neiss/staff photographer) 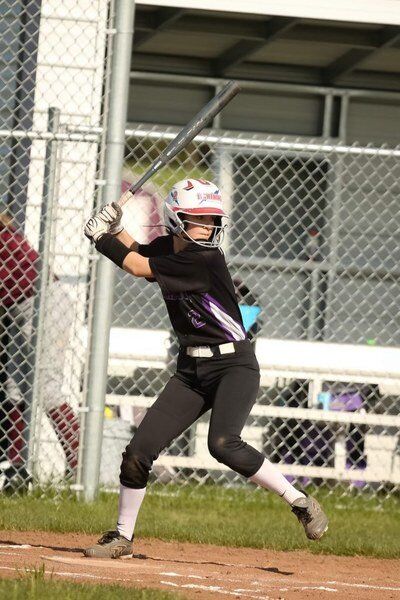 Roy-Hart standout Reanna Perkins is pictured here at the plate up to bat for the Lady Rams. Known more for her pitching prowess, Perkins has shown strong at the plate in 2021, as she's blasted two home runs through nine games played. (Contributed photo)

Royalton-Hartland softball pitcher Reanna Perkins winds up during game action against Newfane, Monday at Roy-Hart. The daughter of former NU baseball standout and MLB draft pick Gerry Perkins, Reanna has become a star in her own right for the Lady Rams. (James Neiss/staff photographer)

Roy-Hart standout Reanna Perkins is pictured here at the plate up to bat for the Lady Rams. Known more for her pitching prowess, Perkins has shown strong at the plate in 2021, as she's blasted two home runs through nine games played. (Contributed photo)

Reanna Perkins has put up otherworldly numbers in 2021.

The junior pitcher has boosted Royalton-Hartland softball, guiding the Lady Rams to a 6-3 record thus far in the Niagara-Orleans League. And if you didn't know by now, then you and Section VI should take note of how dominant the righty has been on the mound.

In the Lady Rams' 19-6 win over the Lady Mustangs, Perkins totaled 12 K's and notched two more hits at the plate, including her second home run of the season. But that doesn't even compare to some of the gaudiest numbers that Perkins has had all year.

Piecing together 16 and 15 strikeout games, respectively, the junior also had an 18-K game, which is still being looked into as an all-time best mark for a Lady Ram. That 15-strikeout game against Albion on June 1 was also Perkins' second straight no-hitter of the season.

For head coach Mark Kwoka his interaction with Perkins after the first no-no says all you need to know about the 5-foot-8 pitcher.

"I didn't even realize it until I got into my book after the first one. And when I got into practice the next day, I said 'do you know you had a no-hitter last night?'," Kwoka said. "And she goes 'yeah, I know,' and that's how she answered it. It wasn't like the big smile and all ... I just looked at her and laughed."

Kwoka said Perkins had a similar reaction after the second one the next game, sharing how her mother informed her of the feat.

"I go 'that's pretty cool' and she says 'yeah, it's just a no-hitter. I'm more worried about the wins.'" Kwoka recalls.

Perkins is glad to be back with her Lady Rams after missing the 2020 season due to COVID and the pandemic. Perkins and Roy-Hart softball had built something special in recent years, making a Section VI Class B-2 title game appearance in 2018 and a second consecutive undefeated N-O season in 2019.

Kwoka inherited Perkins heading into the lone week of practice last season, so he's really been getting to see her up close this spring.

"When you coach kids of that level, there's not a whole lot that you have to teach," Kwoka said.

"A lot of it is already instilled in them by previous coaches. And the amount of play that they have (in travel) ... when a kid like that comes to you, all you do is try to maintain what they've been doing. Monitor their play so they're not getting overworked, if possible. ... She's just a great kid, super coachable, always willing to put the team ahead of herself and a lot of kids are like that. She doesn't complain and she just does the job.

Kwoka also noted how Perkins isn't a fan of acclaim and accolades. He added that she's appreciative of the spotlight, but he said it's something she doesn't necessarily "eat up." And that plays into what Kwoka believes separates her from others.

Although Perkins' physical gifts are apparent, what's stood out to the Roy-Hart head man has been her mental approach to softball. Kwoka cited her mental preparedness, graciousness and hard-working attitude as things that lift her.

"She's earned everything that she's achieved, there's no doubt there. That's what makes her a good, quality leader on the team," Kwoka said. "Just not only her knowledge of the game, it's more that work ethic that she doesn't expect anything out of anyone else that she wouldn't do herself. ... I guess what I first noticed was the inner drive. I mean skills wise, you hate to use that '5-tool player' (cliche), but she's there. She's got the arm, she's got the speed, she can hit for average, hit for power, she's just right there with it.

"And I'm lucky to walk on to a team, taking that over last year, that had some players like that."

It really brings things into perspective when you consider her supporting cast. Reanna is the daughter of Gerry Perkins, a former Niagara University standout and Florida Marlins draftee, and her mother, Jen, played softball growing up. Having full support from her parents, the junior has been able to thrive on the diamond.

"My mom and dad both have definitely been really big supporters in my life for this sport and everything," Reanna said. "But my dad has always ... whenever there's a day off, like something like today, we don't have practice today ... but we'll go out, we'll hit, we'll field and whenever we have time we'll just go to the field and we put in that extra work. But he is very knowledgeable and I really appreciate everything he's done for me in that aspect."

Perkins is also planning to play in two different travel circuits this year. Looking to keep challenging herself, Perkins will be playing up in the 18U ranks again with the Amherst Lightning, as well as trying to connect with her 16U age group in the Lou Gehrig softball league.

The RHP has drawn interest from colleges throughout all three divisions, so Perkins' hope is to get her name out there even more during summer and fall ball.

"I'm hoping to get out there this summer and maybe finalize my plans for my college future," she said. "This travel season is a big one for me, for just scholarships and all that stuff. But I'm hoping to have a really good travel season this year, get back out there with my teams."

"Sometimes you take over a team, you've gotta do some rebuilding, which we are to some degree doing that this year because of the COVID and all of this craziness," he said. "Some kids didn't return, so some kids have had to step up and take on new roles. But for her, she just said 'give me the ball, I'll do what I've gotta do.' And it's so important because not a lot of kids like to do that."