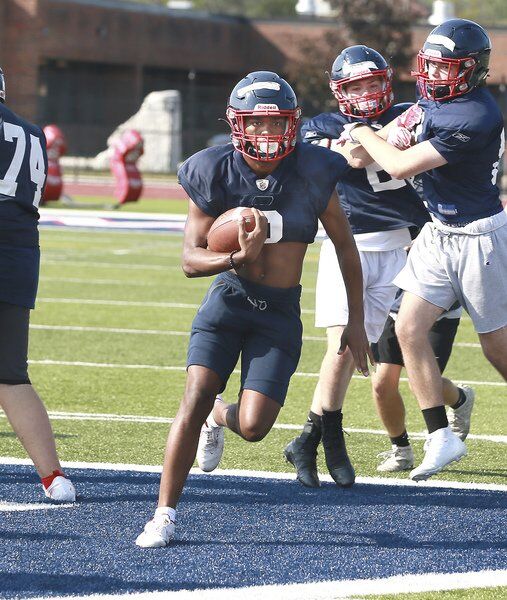 Jim Hibbard/Total Sports ImagingSenior Dennis Johnson, pictured here during an Aug. 27 practice, and the North Tonawanda Lumberjacks will attempt to open the season with an upset tonight of Class AA power Clarence. 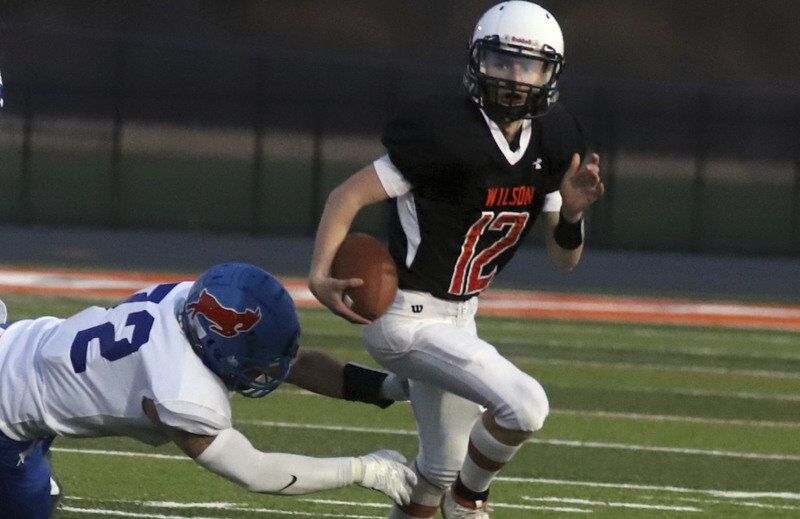 Jim Hibbard/Total Sports ImagingSenior Dennis Johnson, pictured here during an Aug. 27 practice, and the North Tonawanda Lumberjacks will attempt to open the season with an upset tonight of Class AA power Clarence.

High School football has arrived with a full slate of games tonight and Saturday to kick off the season in Western New York.

Here is what you need to know for each game for teams from the Greater Niagara Region:

Non-league neighbors meet for the first time since 2017, as Wilson looks to win its fifth season opener in six years and get back into the upper echelon of Class C. Meanwhile, Lew-Port is searching for its first winning season since 2012.

Trent Reid only threw 36 passes for the Lancers in the spring, but he is the stabilizer for a young squad. Lew-Port could find success if Wilson cannot stop the bruising tandem of 200-pounder James Marshall and Tom Poazak in the backfield.

Grand Island was one point away from the Class A sectional finals last season, while Cheektowaga never truly flexed its muscles last season after playing just three games during the spring.

The Vikings are replacing several key pieces from last season’s squad, but quarterback Justin Horvath returns with his top three receivers, including Tyler Figliola, who was responsible for more than half of the team’s receiving yards.

Meanwhile, the Warriors are looking to return to a form that saw them win four Class B sectional championships in five years from 2014 to 2018. They did not qualify for the playoffs last season for the first time since 2010.

The winner of this Class A tilt will be one step closer to getting its program back on track. Both teams have three winning seasons in the last 15 years.

Niagara Wheatfield has another young team, including first-year starting quarterback Xander Fletcher, while senior running back Jayden Baker will be relied upon heavily after rushing for 247 yards and four touchdowns last season.

Hamburg, meanwhile, is attempting to build off winning its final two games of the spring, including a 7-6 win at Kenmore West in the season finale.

Niagara Falls has young players in key spots, but McKinley is not any more experienced as the two square off in a non-league contest.

Darren Christian and Gavin Molly are both expected to see playing time at quarterback for the Wolverines, as both players are set to play meaningful varsity snaps for the first time in their careers. That could lead to a heavy dose of junior running back Joey Kusmierski, who had some strong moments last season.

McKinley went 0-5 last season and is replacing its top two rushers, leading passer, leading receiver and leading tackler from that squad. Still, the Macks are two years removed from a 9-1 campaign and have consistently fielded a tough team in Class A since Buffalo Public Schools joined Section VI for football in 2010.

The Ben Bunker era is greeted with a tough opener, as North Tonawanda’s redemption tour begins with Class AA power Clarence, which reached the VI semifinals in the spring.

The Lumberjacks will attempt to rev up a speedy offense led by quarterback Nash Rieselman, who threw for 751 yards and 11 scores. NT will also need to get Dennis Johnson loose and he has proven to be a threat in the run and passing games, totaling 336 yards from scrimmage.

Clarence lost its leading rusher to graduation, but quarterback Garrett White is back after throwing for 449 yards and six touchdowns while tossing one interception in 55 attempts. Second-leading rusher James Raymond also returns after rushing for 302 yards on seven yards per carry.

Roy-Hart/Barker/Lyndonville’s return to 11-man football will not be an easy affair against Class B North foe Albion.

The Silverbacks went 1-3 in their lone season at eight-man football last season, which was the first since the three schools opted to co-op. Barker/Roy-Hart posted five consecutive losing campaigns to end its seven-year co-op in 2017, while Roy-Hart went 0-15 on its own the following two seasons.

Prior to the COVID-19 pandemic, Albion experienced a resurgence, going 22-5 from 2017 to 2019. The Purple Eagles went 2-3 in the spring but boast an inexperienced team. Quarterback Amari Jones tossed for 475 yards and four touchdowns as a sophomore, while rushing for three more scores. Classmate Sh’Kwe Riley ran for 222 yards on 5.8 yards per attempt.

Newfane has designs on returning to its recent winning ways, but a key to becoming a Class C power will be winning its first season opener since 2007. Depew, however, bumped down to Class C for the first time and is looking to build off a 4-1 spring season.

The Panthers must rejuvenate a triple-option offense that plummeted from averaging 270 yards per game on the ground in the three seasons prior to the pandemic to 60 last season. Sprinkling in the arm of quarterback Ryan Kramp will also be critical for an offense that has not produced much success through the air during the last decade.

Lockport coach Trait Smith had bold expectations of running the table entering the season and that gets put to the test immediately with a visit from five-time reigning Section VI Class AA champion Lancaster.

The Lions have the right to be optimistic after winning their final three games and putting up more than 40 points per game in the process. Junior quarterback Jason Green Jr. is the lynchpin, particularly after throwing six touchdown passes in the three-game winning streak.

The Legends must replace star quarterback Jason Mansell and star running back Cody Phillips, but they have become accustomed to reloading over the years. Leading tackler Sam Judasz returns, while Joe Podraza tallied four sacks in the spring. Noah Kimble also returns after catching 29 passes for 437 yards and five scores.

After going winless in the spring, one of these teams is guaranteed a win this season. Both teams finished 0-5 last season as injuries plagued Starpoint from the beginning of practice. Hutch Tech, meanwhile, has not recorded a winning season in five years.

The Spartans should have the ability to move the ball with third-year starting quarterback Carson Marcus, who threw for 458 yards last season. Finding a way to protect him with a youthful offensive line will be crucial.

Any type of score will be celebrated for Hutch Tech after scoring a total of eight points last season and surrendering at least 34 points in each contest.