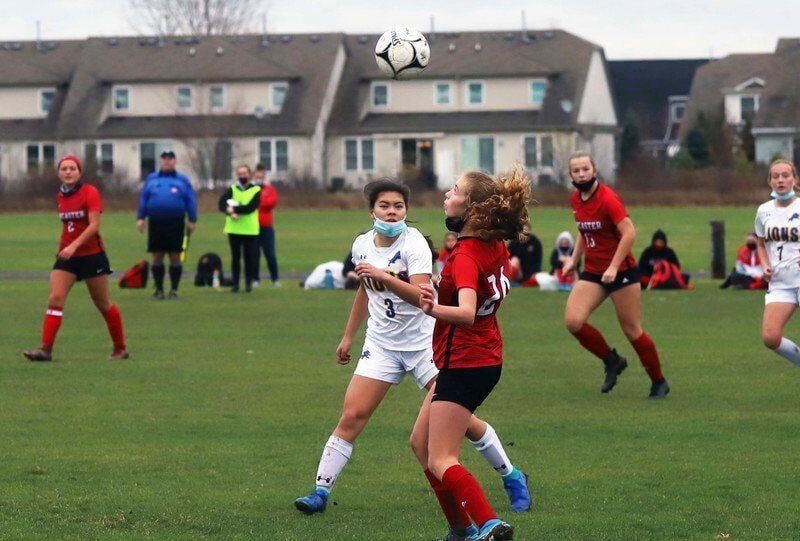 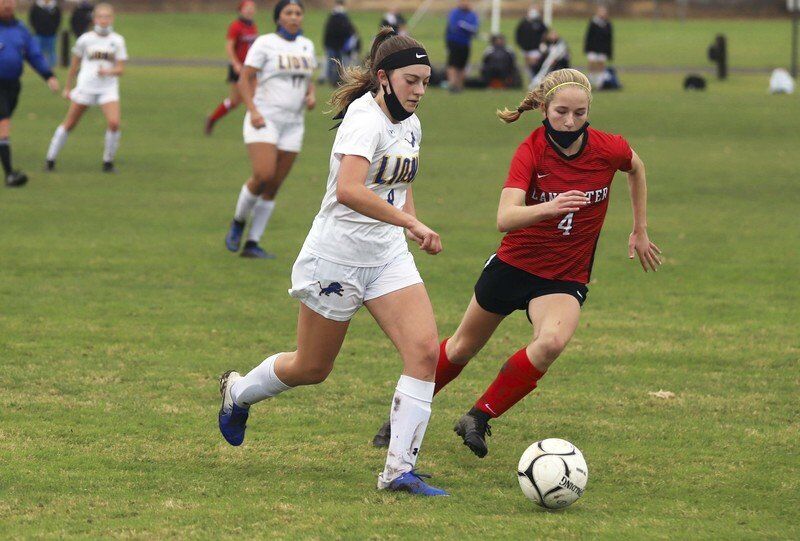 LANCASTER — Lockport girls soccer may have run into the wrong team at the wrong time.

Kicking off a jam-packed Veteran's Day schedule, the Lady Lions were unable to upset Lancaster in the Class AA semifinals, dropping 5-2 Wednesday at Lancaster High School. Lockport finishes its 2020 season at 7-6, giving the program back-to-back winning seasons dating back to 2019.

The game was under the Lady Legends' control throughout, as they took a 4-1 lead into halftime. Lancaster saw first-half scores from Katelyn Greene, Raelyn Stranc, Julia Benham and Sydney Lattimore, while Benham and the Vanderboschs, Shealyn and Kamryn, spread the ball well, adding assists on three of the four goals.

Lockport would get on the board right before the half, though, as senior Michaela Reid notched her first goal of the season.

The second-half action was more even, as Greene added one final touch with her second goal coming just under nine minutes left to play. Lockport's Camryn Schiavitti rounded out the scoring with 6:27 remaining. Lancaster's Caroline Helenbrook and Lockport's Rebecca Cioara contributed assists on those goals.

Despite the losing effort, Lady Lions goalie Bella Pfohl performed admirably, totaling 15 saves while being peppered with shots all game.

Reid was not anticipating her first goal of the year in this matchup, but it was a pleasant surprise to be able to score in her final high school game. Getting through a COVID-infused season was an even bigger surprise, as Lockport had serious doubts as to if it could finish out the year.

"At first, it was hard, because we had to wear masks the whole time. And we kept getting worried that it'd get canceled because of the cases at the school," said Reid, who was a four-year varsity member. "And they would cancel practice, we were worried and all that. But we just kept working and it was pretty good."

The senior defender and midfielder shared that the season's motto was more about having fun than winning. But with 13 seniors on the roster, the mentality ahead of the Lancaster matchup was "last game, last season, let's go for it."

As odd as COVID has made the 2020 season for most seniors, Reid was able to reflect on what her senior year brought.

"Definitely just like practices where we had fun and everything," Reid said. "And then after the game on the bus, even if we lost or won, we'd still talk and still have fun."

The 2020 season also put Lockport's JV boys soccer coach Andrew Godfrey in an odd position, as he took over for head coach Mike Finnerty a few weeks back while the latter was away due to coronavirus contact tracing. Although it was under imperfect circumstances, Godfrey enjoyed being able to coach this group again, after working with many of them as a JV girls coach in 2017.

His being on the Lady Lions' sideline was due to unforeseen factors, so that was a note Godfrey tried to harp on whenever he could.

"It's tough for everybody ... to see what the big picture is, we may lose our season at any second," Godfrey said. "And throughout the year it almost happened. We got a couple cases here and there. And for me, filling in for our head coach, it happened last second. It's a lot of hurdles, it's a lot of overcoming adversity and I think that, long term, hopefully this all goes away and we don't have to see this different kind of season."

Although Wednesday's result wasn't a part of the plan, Godfrey could see how the squad carried the mindset it had all year, especially knowing the end of the season could come at a moment's notice. Being able to secure the No. 3 seed in the AA playoffs, Godfrey commended his girls for not letting the adversities with the virus dictate how their season played out.

Guiding this roster with so many seniors, Godfrey had a send-off message to share with them.

"Embrace it. Take the opportunity and propel," Godfrey said.

" ... It's an emotional time for the seniors, especially losing like this, and end of the year, going through what they had to go through. But I wish 'em the best. ... Can't ask for a better group, 12, 13 seniors, and I wish them nothing but the best. I hope that they take what they learned through the course of their high school career and they propel into the future. And ... that they grow up to be great young women and do something bigger than just the game of soccer."