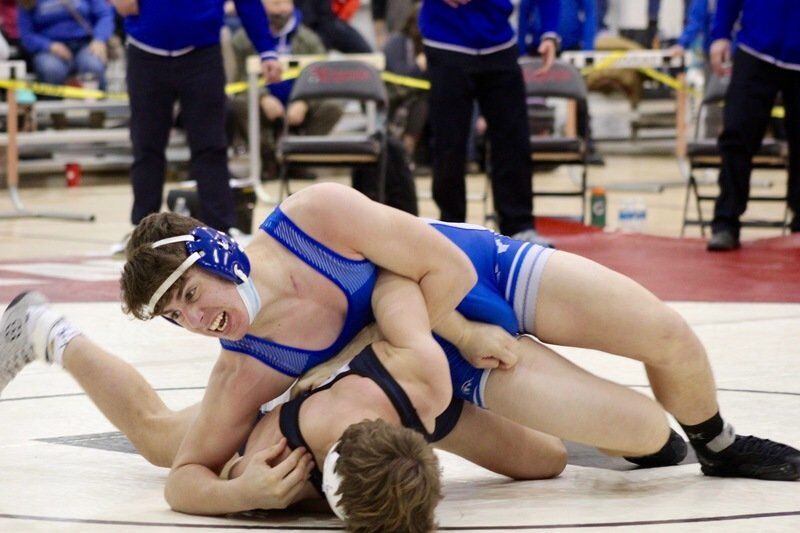 Nick Sabato/StaffNewfane's Simon Lingle flips Falconer's Kyle Keefe for a pin in a 215-pound match at the Section VI dual championships on Saturday in Lancaster. 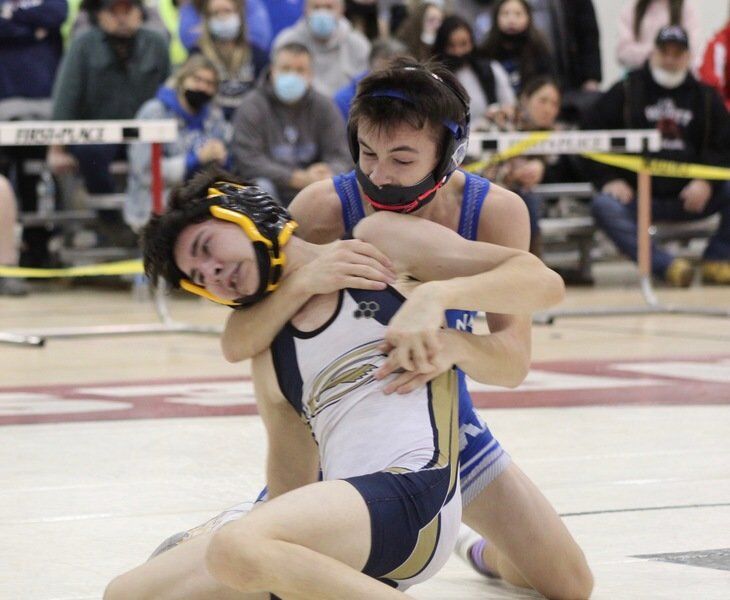 Nick Sabato/StaffNewfane's Aiden Harris battles for position with Falconer's Hunter Paulisick during a 118-pound match at the Section VI dual championships on Saturday in Lancaster.

Nick Sabato/StaffNewfane's Simon Lingle flips Falconer's Kyle Keefe for a pin in a 215-pound match at the Section VI dual championships on Saturday in Lancaster.

Nick Sabato/StaffNewfane's Aiden Harris battles for position with Falconer's Hunter Paulisick during a 118-pound match at the Section VI dual championships on Saturday in Lancaster.

LANCASTER — Newfane put its faith in a pair of seniors to overcome its bogeyman.

Whether it has been the Section VI Division II wrestling tournament or the dual championships, the Panthers have been unable to slip past No. 2 Falconer. On Saturday at the Division II dual championships at Lancaster High School, top-seeded Newfane saw a 27-3 lead wither away, only for Simon Lingle and Charles Larose to snatch it back.

Leading 27-24 with three matches remaining, Lingle bumped from 189 to 215 pinned Kyle Keef in 4 minutes, 23 seconds and Larose clinched a 43-24 win with a 285-pound pin of David Stein to give the Panthers their first dual sectional championship, while dethroning the three-time champions.

“We can strategize all we want, but it comes down to the kids doing what they’re supposed to do,” Newfane head coach Matt Lingle said. “They went above and beyond what we asked them. Kids moved up two classes and drank water to make weight, but we got where we are. It’s all on the kids — they kids have done the work and put the time in.”

Newfane — which earned a semifinal bye after No. 4 Portville pulled out Friday — was cerebral in its strategy all match. The Panthers shuffled weight classes in pursuit of the best available matchups and it proved successful early.

Normally a 102-pounder, seventh-grader Brayden Kellison-Neglia bumped to 110 and earned a third-round pin of Karsen Lundgren in the opening match. Aiden Harris by pinning Hunter Paulisick with 22 seconds remaining in the 118-pound match, as Newfane recorded pins in four of the first five matches. Freshmen Ayden Buttery (126) and Aidan Gillings (138) both had second-round falls.

“With Brayden, we thought that was going to be more of a tight match and the Aiden Harris match was huge for us,” Lingle said. “It really allowed our other guys who had different types of jobs to relax because that was three extra points for us.”

Just as Newfane was poised to turn the match into a rout, Falconer won four consecutive matches. With 189-pounders Dominic Massar and Kyle Oship both suffering broken ankles earlier in the week, the Panthers forfeited 172, placed typical 160-pounder Cade Miller at 189 and moved Lingle to 215.

Lingle (16-1) has bounced between 189 and 215 all season and held off an early charge by Keefe to control the match before getting the pin. Larose thought to have a pin near the end of the first round, but blood stopped the match. He ultimately got the win 57 seconds into the third period.

Jakob Lucinski scored an 11-2 major decision over Falconer’s Dylan Newman at 102 to end the dual, allowing Newfane to finally avenge a loss to the Golden Falcons in the 2020 finals.

“Falling short my seventh-grade year wasn’t the best feeling,” Gillings said. “That match could have gone either way. We built off of that and we’ve known these were the guys to beat this year. The bye against Portville helped because we built our weights around (Falconer) and we came away with the victory.”

Newfane will compete in the NYSPHSAA dual championship on Jan. 29 at the SRC Arena and Events Center in Syracuse.