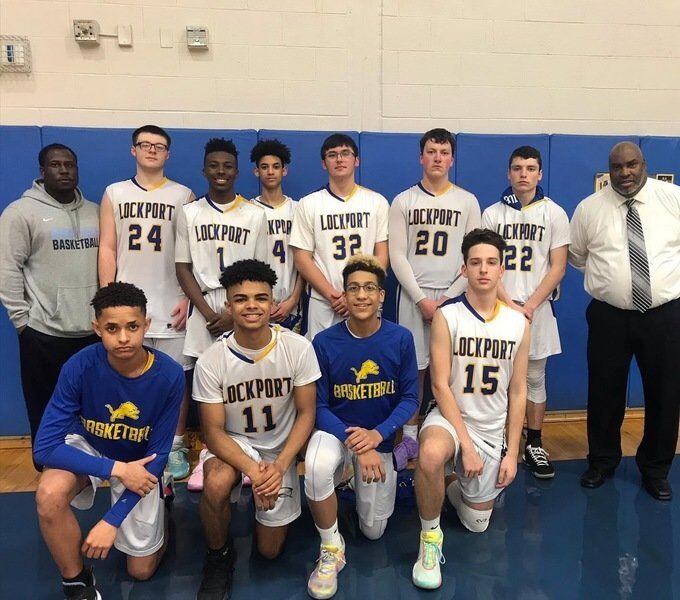 Contributed photoLockport coach Joe Poole (far right) and the 2019-20 JV boys basketball team pose for their team shot at Lockport High School. As one of the few people of color coaching in the district, Poole aims to help Lockport kids on and off the court.

Contributed photoLockport coach Joe Poole (far right) and the 2019-20 JV boys basketball team pose for their team shot at Lockport High School. As one of the few people of color coaching in the district, Poole aims to help Lockport kids on and off the court.

People like Joe Poole and Miles Patterson don't come around every day. But when they do, make sure to keep them close.

Many Lockport students and families recognize these names, as they also serve as school security monitors in the high school. Their impact has also spanned to athletics, as both former student-athletes have shared their own experiences with the youth of the Lock City community.

Patterson's exploits date back to the early 1980s, helping Lockport to undefeated league championship seasons in football and track and field during the 1981-82 school year.

Carrying those experiences over after his collegiate tenure at William Penn, Patterson has worked at most levels of the Lions football program, as well as building up the track program to one of the best in Section VI. He now serves as an assistant track coach after years in the head role.

"Some of the things that you learn in sports help to carry on in life," Patterson said. "For example, (I) learned how to be dedicated, learned how to be true to my teammates. (I) tried to perfect my craft so I wouldn't let them down, and to me that kind of carried over to working with young people today.

"Teach them to be dedicated to whatever they choose to do in life, do it well, do it to the best of their ability."

Poole was a three-sport standout in the Class of '85 at Medina, where he was a league champion, an all-league and all-county performer as a basketball player, as well as playing football and baseball. Great coaches like Larry Decker and Nick Benedetti guided Poole in his playing days, inspiring him to get involved and give back to the next generation.

One of the many lessons he learned was maintaining his high work ethic. Poole tries to spread this message with the youth with which he now works.

"You don't have to be the greatest athlete. But if you have a good work ethic you can be competitive on that court," Poole said. " ... You want to instill in all the kids that you coach the importance of life lessons you're gonna learn throughout life. Because it wasn't just all about winning all the time; it was about enjoying just the fact that you compete in a sport and you work together, and you trust each other, and you learn how to get along together as a team.

"And not only that, you develop the skills of just having good sportsmanship when you're on the court. And that just carries on in everyday life, that you've gotta have that personality where you're well-respected, but you're well-liked."

Poole's coaching career began with Royalton-Hartland before he moved over to Lockport and had a brief stint with Niagara County Community College's women's basketball team. He coached football, wrestling and boys basketball on the modified and JV levels for the Lions.

A Niagara Falls resident, Poole tried to do the same with his son, Tyler, coaching him up in summer and through church basketball leagues. That helped prep him for the varsity level, where Tyler was a part of two NFL title teams and won the Section VI AA championship in 2012.

That's why it's been such a strain this year. Not only have these two coaches been held back from working with the kids, they're not able to see them in school on a daily basis. Due to Section VI postponing the indoor track season, Patterson will not have coached Lions sprinters since the 2019-20 indoor season. The hope is he can work with them once again for the outdoor season.

"I know I can speak for Mr. Poole when I say this, the biggest thing for us is we dedicate ourselves in trying to build relationships with the students," Patterson said.

"And many of the freshman we haven't even had an opportunity to meet due to COVID, because a lot of them have gone full virtual. So that affects us to get to know them, which in effect handcuffs us to help them to the best of our abilities, because we know what relationship building does. They gain trust in us, they know we're here for them and not against them. And we still try to do the best we can. As of now, we even reach out to them via email or some phone calls."

Poole feels the same way and he hopes that the remainder of their athletic seasons aren't hampered this year.

"That's why it's so hurtful right now with this whole COVID situation," Poole said. "Because you really want to see the kids that you coach."

Patterson simply added to this with a statement and a laugh: "They don't know we're the good guys yet."

Both shared how COVID has put a strain on coaches, staff, kids and parents overall. Things haven't been ideal getting acclimated to a new brand of learning, so Poole just hopes everyone can roll with the punches until life is back in order.

"For some people it's tough for them to adjust, but that's like everyday life," Poole said. "Everything ain't gonna be peaches and cream. You're gonna get thrown curveballs sometimes, you've just gotta learn how to adjust."

Their roles go even deeper as well, considering the fact they're two Black coaches working in a district that is predominantly white and has seldom people of color on staff, let alone working in the athletic department. They both understand that responsibility and what it means to be building up all youth, but especially kids of color.

"One, I take it very serious. I learned very early with my own son (Anthony)," Patterson said.

"He would have his friends over, many being African American friends. And I realized the group of friends he hung out with, there were not a lot of dads in the picture. So early on, I kind of took on the dad role for many of his friends, one that I still take on and try to do the best I can so our children of color can see they're are positive, Black role models out there. Treat them as if they were my own and try to set a good example every day."

Patterson continued: "A lot of times, when the kids come in and speak with Mr. Poole and I, we certainly make sure we're getting them positive and encouraging messages, so they can be successful in anything that they do. No matter what hand that they were dealt with, they determine their future by making real good choices. And let them know that the world is theirs for them to conquer and take and do everything that they can to achieve their goals."

Poole couldn't agree more, which pushed him to start an after school program that brought in professional people of color to give the kids faces to aspire to, not just musicians or athletes.

Like Patterson's with his son, Poole had a similar experience due to his constant presence with his son's basketball exploits. Poole often noticed the lack of male figures for Tyler's teammates, so he wanted to show his son his love for him and pushed himself to any lengths to support his dreams.

But seeing how their relationship positively impacted the other kids, Poole couldn't just stop there.

"A lot of these kids, their parents wasn't there to support them or even show up," Poole said.

" ... When you see something like that, it breaks your heart because a lot of these kids, they want to be shown that someone cares about them or they love them, they support them. And getting back to the situation with Lockport, yeah we're the only two Black males in the school system since Mr. (Ronnie) Cheatham left. I'll be honest with you, I think it's very sad that we have no male teachers (of color) in this building or even in the district.

Poole continued: " ... We talk to everybody, you know that, but especially to the young, black youth. We want them to understand that, listen to be successful in life, we can do it. And don't let anybody out there tell you that you can't."