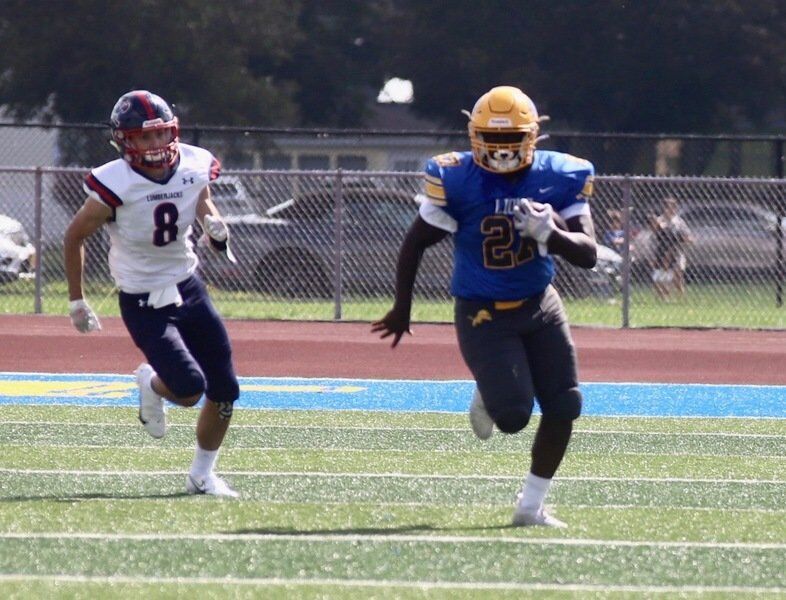 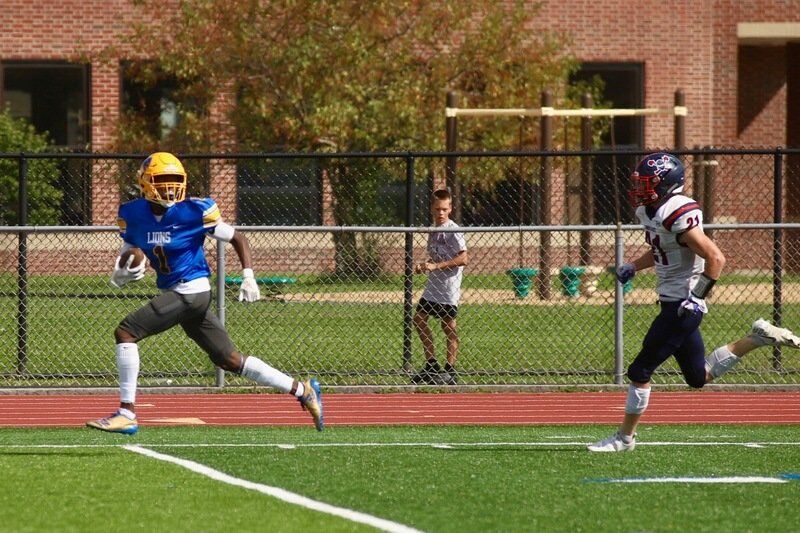 Lockport's Kai Tran (1) runs away from North Tonawanda's Justin Van Volkenburg (21) during a game on Saturday at Emmet Belknap Intermediate School in Lockport.

Lockport's Kai Tran (1) runs away from North Tonawanda's Justin Van Volkenburg (21) during a game on Saturday at Emmet Belknap Intermediate School in Lockport.

Lockport High School saw its first two football games slip away in the second half. On Saturday, it made sure the game was not in question at halftime.

Jaheim Clayton returned the opening kickoff 76 yards for a touchdown and the Lions were off to the races in a 52-6 Class A North win over North Tonawanda, as they built a 39-0 halftime advantage at Emmet Belknap Intermediate School.

For Lockport, it was not only a resounding win, but a victory that could alter the season after starting 0-2, including a 24-20 loss to Kenmore West that saw the game decided in the waning moments the previous week. The Lions are now back in position to refocus on their preseason goal of pursuing a league championship.

“It was a huge win,” Lockport head coach Trait Smith said. “All week we’ve been pressing that we couldn’t go 0-3. Just like all schools, as soon as they go 0-3, things start to fall apart and the wheels start falling off. They worked hard and they deserve it.”

What was believed to be a high-octane offense prior to the season finally kicked into gear against the Lumberjacks. Deep balls that were off target in the first two games found their marks, as quarterback Jason Green recorded a perfect game, for five touchdown passes, including three to tight end Logan Wendt.

Three of Green’s touchdowns were high-arching balls along the right sideline during the first half, including one to a leaping Matthew Schaffert, who snatched the ball away from a pair of North Tonawanda (1-2, 1-1 Class A North) defenders.

Green finished 7 of 7 for 215 yards, while Wendt had three receptions for 80 yards. Kai Tran had two catches for 79 yards, including a 59-yard touchdown and Clayton ran ran for 84 yards on five attempts.

“We were just practicing it a lot,” Green said. “We were getting it a lot in practice and we were successful with it (against North Tonawanda).”

Lockport (1-2, 1-1) now turns its attention to unbeaten Sweet Home in a 2 p.m. home game on Sept. 25 in a game that could be telling of its fortunes for the remainder of the season. The Lions did not allow the Lumberjacks to establish their triple-option offense and a similar performance will be required against a Sweet Home team that has pulled out three wins in games that were separated by one possession in the fourth quarter.

The Panthers scored come-from-behind wins the last two weeks, including using a blocked punt for a touchdown -- their second of the game -- to defeat Kenmore West 19-14 with 2 minutes, 28 seconds to play on Friday.

“Next week against Sweet Home is our homecoming, so all of us are going to be pumped up for that,” Wendt said. “I feel like this was a really good game to get us back into the flow and that we want to play football. Coming off the field against Kenmore West, everyone was upset, but a game like this really gets back into it and shows us what we can do.”