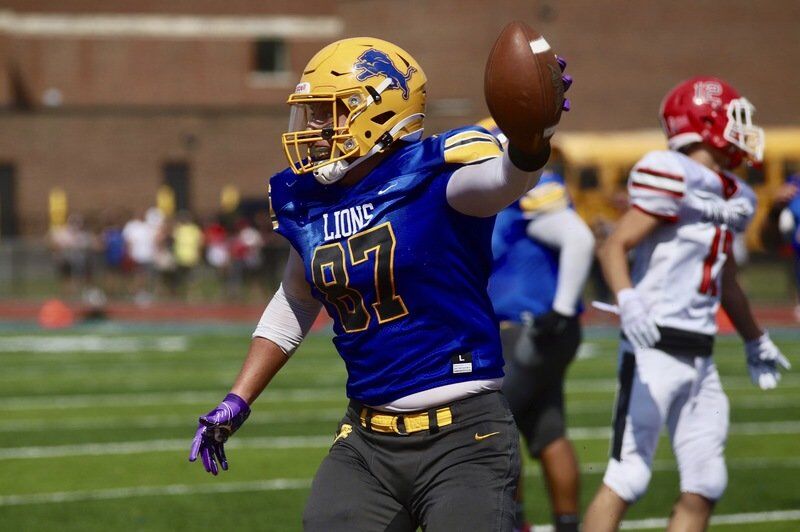 Paul Battson/contributorLockport's Logan Wendt celebrates while carrying the ball into the end zone for a touchdown Saturday during the Lion's season-opening game against Lancaster. 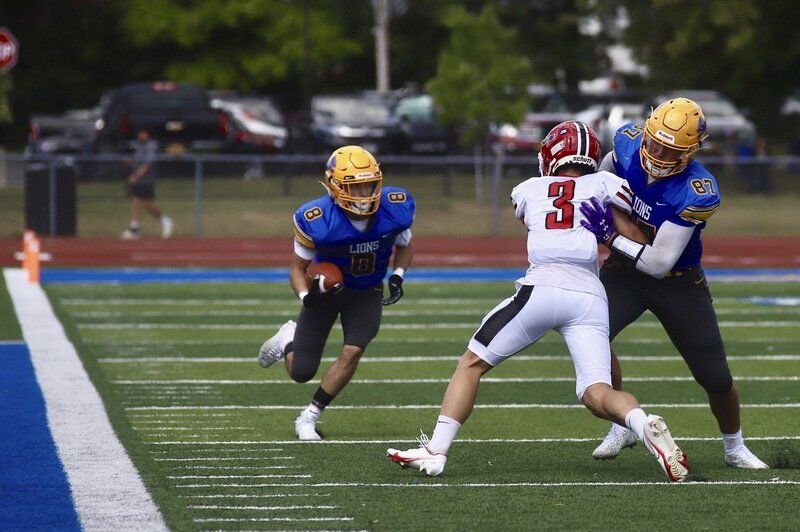 Paul Battson/contributorLockport's Matthew Schaffert takes the ball down the sideline in Saturday's game against Lancaster. 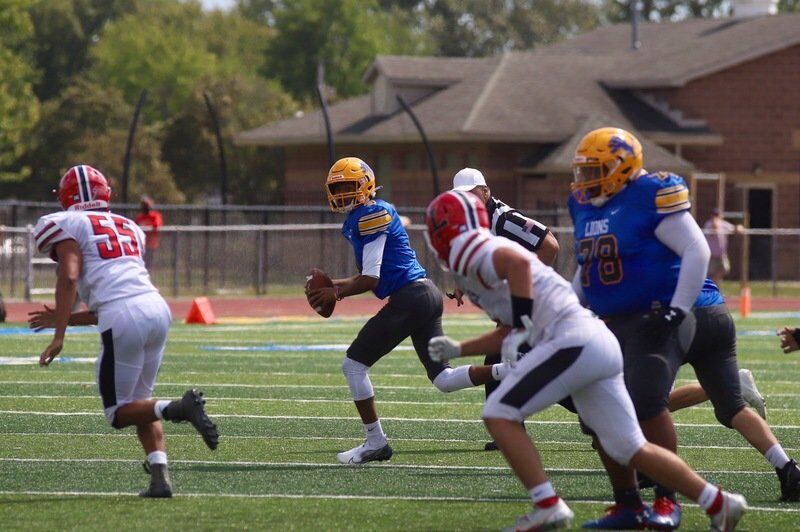 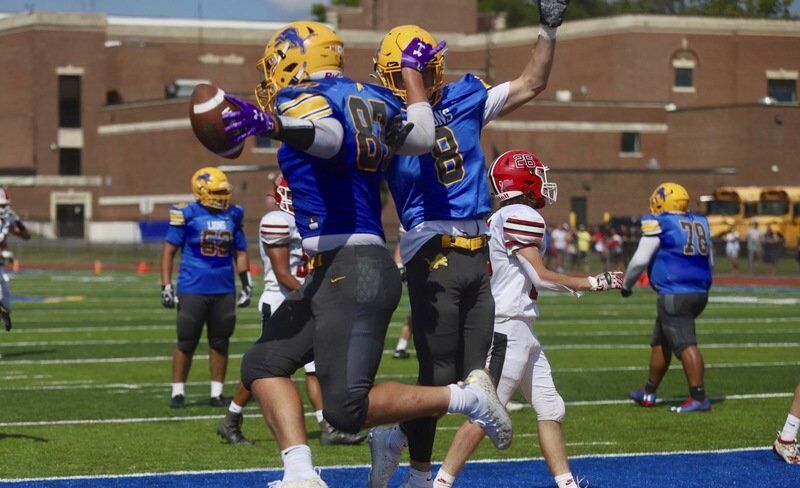 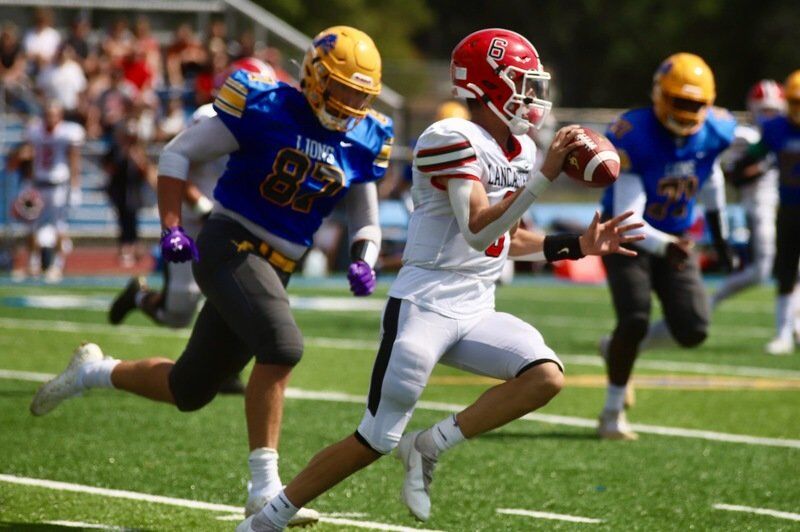 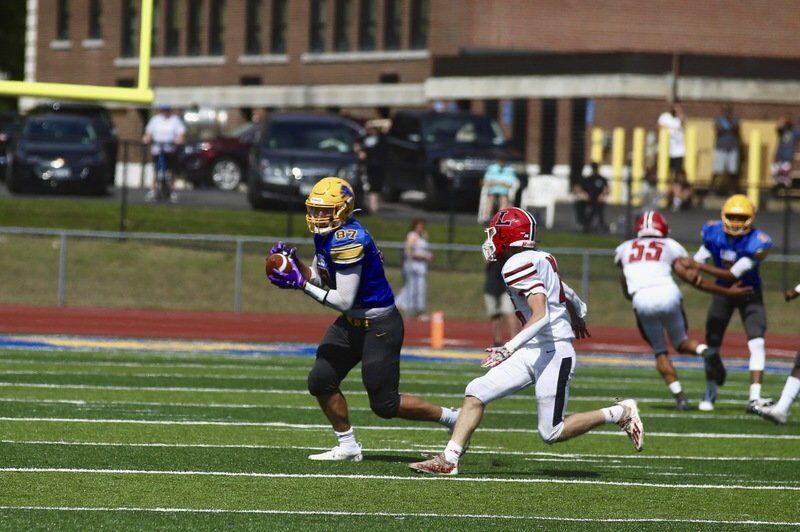 Paul Battson/contributorLogan Wendt carries the ball for the Lions in Saturday's home game against the Lancaster Legends.

Paul Battson/contributorLockport's Logan Wendt celebrates while carrying the ball into the end zone for a touchdown Saturday during the Lion's season-opening game against Lancaster.

Paul Battson/contributorLockport's Matthew Schaffert takes the ball down the sideline in Saturday's game against Lancaster.

Paul Battson/contributorLogan Wendt carries the ball for the Lions in Saturday's home game against the Lancaster Legends.

All were costly as Lockport High School dropped its season opener to Lancaster 48-12 on Saturday at Emmet Belknap Middle School. Yet the Lions are not discouraged and they hold the same high expectations fostered at the beginning of the preseason.

Lockport struggled with cramps and inexperience in key parts of the game, which led to the five-time reigning CLass AA champion Legends scoring 28 consecutive points in the second half.

“I applaud (Lancaster) for what they did, but we did good things, too,” Lockport head coach Trait Smith said. “We just have to fix our mistakes and grow. We’ll start with our (Class A schedule) this week and move on. That’s a greater starter for us and hopefully it will motivate us to go in the right direction.”

A short punt led to Lancaster’s first touchdown and the Lions were able to march down the field, until a blocked field goal resulted in a scoreless possession. It proved to be a foreshadowing moment for the remainder of the game. Any time Lockport appeared to have momentum, the Legends came up with a big play to thrust it back in their direction.

Even after Jason Green, Jr. connected with Logan Wendt for a touchdown following a Steven Ball interception, Lancaster’s Noah Kimble reeled off a big kick return, setting up another score to regain a two-score lead.

Lockport’s chances to climb back in the game were consistently shucked, coming away scoreless on two drives into Legend territory to end the first half and Micah Harry’s 52-yard touchdown catch-and-run slammed the door on the opening drive of the second half.

“I started to notice at the end of the second quarter that they looked a little bit tired,” Lancaster head coach Eric Rupp said. “They had some two-way players, especially up front. So we just wanted to go faster — as fast as we possibly could.”

Despite the significant margin of victory, Lancaster held a 301-255 advantage in total offense, but it used the demoralizing plays to wear down the Lockport defense and Harry was the biggest benefactor. He bludgeoned the Lions for 134 yards on 23 carries. Harry also found the end zone four times, with two scores of more than 50 yards in the second half.

In recent years, Lockport has struggled with momentum-changing plays and Smith knows that if his team wants to make a run in Class A this season, his team cannot become discouraged in those moments. He highlighted several key stats, including Green going 23-for-47 for 165 yards and Wendt catching eight passes for 73 yards and two touchdowns. Jaheim Clayton also ran for 82 yards on 13 carries despite battling cramps for most of the game.

The Lions are back in action at Kenmore West at 7 p.m. on Sept. 11, beginning a stretch of six consecutive league contests.

“We’re learning,” Smith said. “I’ve got a young group. I graduated 19 last year, but they’re willing to learn and that’s all it is. If we can get them here Monday to learn and build on their mistakes, hopefully we can preserve and get through it.”