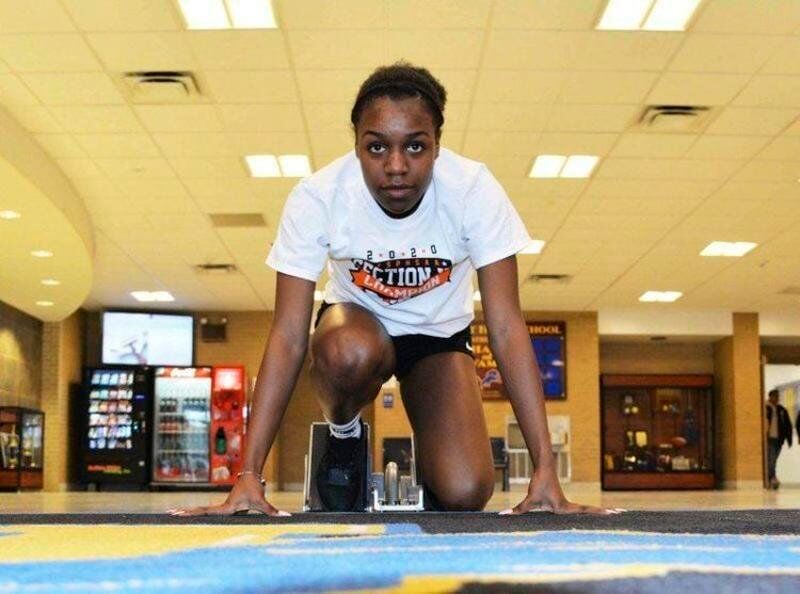 JOHN D'ONOFRIO/STAFFIn this Feb. 25 file photo, Lockport High School sprinter Kahniya James preps for the 2020 NYSPHSAA indoor track and field meet, where she set a Section VI record with a 6.95 in the 55-meter dash. 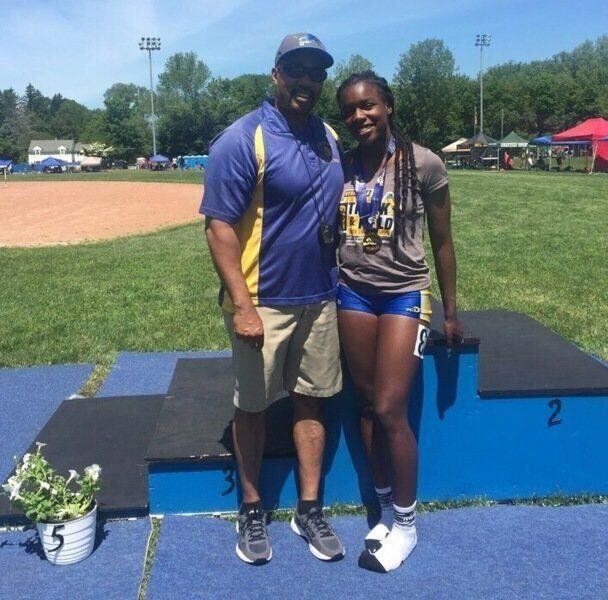 JOHN D'ONOFRIO/STAFFIn this Feb. 25 file photo, Lockport High School sprinter Kahniya James preps for the 2020 NYSPHSAA indoor track and field meet, where she set a Section VI record with a 6.95 in the 55-meter dash.

Lockport's Kahniya James announced her commitment to Syracuse University on Oct. 25, as she'll continue on what's already been a dynamic track and field career. Ranked as the fourth-fastest 55-meter girls sprinter in the nation, James joins a program that has one of the top sprint coaches around in Dave Hegland, as well as assistant coach and former four-time All-American Reuben McCoy.

"Syracuse has always been a school I've been looking at. I never actually thought that Syracuse would be looking at me," James said. "I don't know, I just never thought about it."

As one of the top schools in the Northeast, as well being a further drive home than from the University at Buffalo or Canisius College, James looks forward to representing the Orange and studying psychology at Syracuse.

One of the coolest parts of joining SU for James is being alongside her high school teammate Sydney Nowicki, a standout distance runner who announced her commitment with the Orange on Sept. 16. Although it was a pleasant surprise to end up on the same campus, James is happy to have a teammate she's known since their days on Lockport's T&F squad as seventh graders.

To think track has impacted James' life this way has also been a surprise. When she started out back in 2015, she was just looking for more ways to be around her big brother, Kahlil, a Section VI champion for Lockport's 4x100 relay team that set a new sectional record in 2016.

Even before she was a Lady Lion, Kahlil had Kahniya running routes with him, because he saw the potential she had. As much as he pushed her to be great, Kahlil also helped by hyping Kahniya up, even when she didn't think she this level was attainable.

"It kind of turned into something a lot bigger and I was a lot better than I thought I would be," Kahniya said. "So once I realized that I could actually get somewhere with this, that's when I actually started working towards goals ... like breaking the school record(s)."

James has done that for sure, as she now holds school records in the 100- and 200-meter races, as well as the Section VI record with a 7.02 run in the 55-meter dash last indoor season at sectionals.

Her encore performance? Reaching her goal of the sub-7-second mark, as James recorded another record time of 6.95 at the NYSPHSAA meet, taking second in the event in a photo finish with Schalmont's Mia D'Ambrosio.

Each season has brought on new internal challenges that James has checked off. That's why she's so excited to get to 'Cuse and see how much further she can go.

"I want to see how good I can get. ... The 60 meter, I don't even know what a good time for that would be, but I want to be good. I want to be the best," James said. "The top of the top. So I'm definitely working towards that. For the 100, I definitely want to be in the 10s somewhere during the end of my career."

Just for some perspective, former NFL stars like Devin Hester and Bo Jackson recorded 100-meter dash times in the 10s. If James has another goal in mind, it'd be wise not to bet against her.

Lockport's indoor sprint coach Josh Jablonski couldn't speak highly enough of James, as he hopes to work with her one last time as the indoor season is now slated to begin Dec. 14. Like Kahlil, Jablonski saw James' talent even when she may not have.

It goes all the way back to her time as a fifth-grader in Jablonski's physical education class a Emmett Belknap Intermediate School.

"We do an annual Olympics unit, track and field Olympics. And right away, end of her fifth-grade year as we're doing a 50-yard run, 100-meter ... and she's blowing everybody out of the water," Jablonski said. "Boys, girls, fifth and sixth grade. It was just amazing to see. ... We've got something special here."

Jablonski immediately shared this with former head coach and current assistant Miles Patterson and his staff. Being able to eventually work with James, Jablonski said "it's just an honor to coach somebody like that."

Jablonski said the biggest strides he saw James take came last season, which lead to more national acclaim as the season went along. The focus level and work ethic that she brought made the difference, with an emphasis on weight training improving her in all facets.

Prior to the 2019-20 season, James and Jablonski set goals like winning states, breaking the seven-second plateau and really attacking weight training. As she achieved most of her marks, Jablonski believes James' mindset is what set her apart.

"I've seen it in the past where an athlete ... you kind of get complacent. 'Oh, I'm one of the best already,'" Jablonski said. "It actually kind of fueled her and I could see more of a hunger and drive to continue to improve, continue to get faster and try and break seven seconds."

Even though it was pulling teeth at times getting into the weight room, James is glad Jablonski kept on her to stick with it.

Another name that Jablonski knows was an influence for James was fellow Section VI champion Treston White, who just so happens to be a family friend.

James cited Patterson as someone who's always been there to help her. Whether that was adjusting block starts, or running better routes, James said Patterson has always "guided" her throughout this process.

Lockport head coach Tim Willett really looks forward to seeing what both James and Nowicki are able accomplish once they head to Syracuse. Having seen them both grow since their seventh-grade seasons, Willett couldn't be happier for kids that he describes as "two super hard workers and students of the sport."

Although his work with James is not as much on the day-to-day basis like Patterson or Jablonski, Willett has enjoyed seeing her progression. Especially knowing how her dedication last winter pushed her this far.

"I know she was doing work even outside of practice to make herself stronger," Willett said. " ... So you saw that big growth spurt and that strength, and that's what kind of catapulted her.

He added: " ... I feel kind of bad that, like all of our seniors last year, but she got kind of robbed of that opportunity of the outdoor season to see what she could do, because I thought she was setting herself up for some great things there. And I know coach Patterson would've picked right up where coach Jablonski left off with her. So credit absolutely to her."