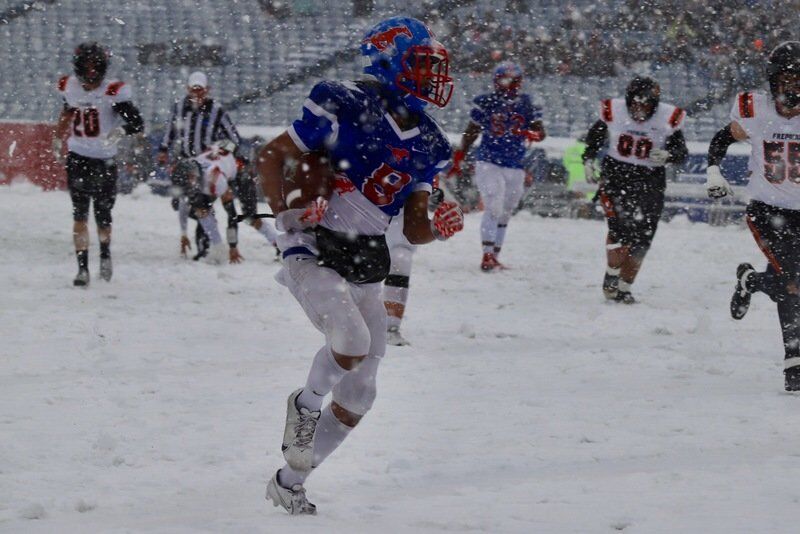 Paul Battson/contributorMedina's Greg Thompson runs for a handful of his 265 yards during the Section VI Class C championship game against Fredonia on Saturday at Highmark Stadium. 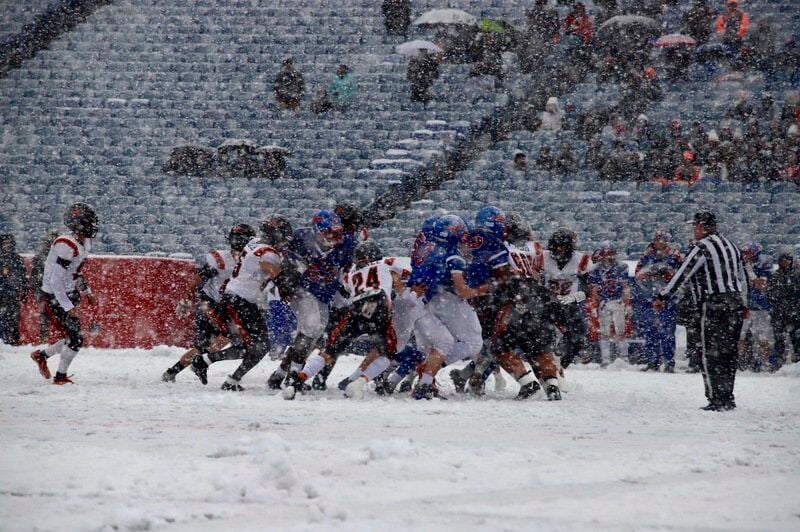 Paul Battson/contributorMedina and Fredonia met Saturday at snowy Highmark Stadium, with the Mustangs rushing their way to the Section VI Class C crown. 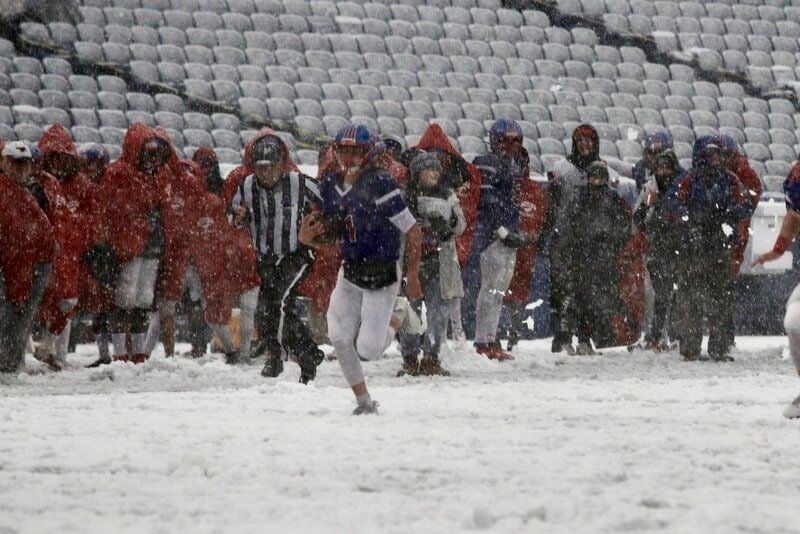 Paul Battson/contributorMedina's Greg Thompson runs for a handful of his 265 yards during the Section VI Class C championship game against Fredonia on Saturday at Highmark Stadium.

Paul Battson/contributorMedina and Fredonia met Saturday at snowy Highmark Stadium, with the Mustangs rushing their way to the Section VI Class C crown.

ORCHARD PARK — Medina football has been so nice, it had to do it twice.

As the skies played "Let It Snow" with a white sheet covering the field Saturday at Highmark Stadium, the Mustangs continued to charge on in a dominant 2021 calendar year with a 58-6 shellacking of Fredonia in the Section VI Class C championship game. Medina (11-0) has set a new program record for wins as it claimed back-to-back sectional championships for the first time in school history.

The Mustangs steamrolled the Hillbillies (10-1) in the trenches, churning up a Section VI championship game-record 590 yards on the ground en route to 626 yards of total offense.

Medina pounced early and often, nearly taking its first drive to the end zone before Fredonia recovered an Iverson Poole fumble at the 1-yard line. But after trading punts with the Hillbillies in the first quarter, the Mustangs did not look back.

Mustangs QB Xander Payne did his best Michael Vick impersonation, sifting and spinning through the Fredonia defense for a 70-yard run on a zone read play. That led to him capping the drive with a QB sneak, before a 2-point conversion made it 8-0.

Payne was far from done, as he made the Hillbillies pay for fumbling by notching a 28-yard TD run. Noah Skinner’s second 2-pointer made it 16-0, further extending on what would be a long afternoon for Fredonia.

Payne would add his third rushing score of the day in the first half, and he also saw his backfield mates in Skinner and Greg Thompson hit pay dirt as well, giving Medina a 32-0 lead. Fredonia All-Western New York QB Nick Whitfield was able to get on the board with a rushing TD before the break, but it was just a drop in the bucket in terms of a comeback effort.

Thompson would salt things away in the second half, showing off his breakaway speed on an 82-yard TD scamper — his first of three TDs after halftime. The all-purpose weapon had a whale of a day, setting career highs of 265 rushing yards (26.5 yards per carry) and four TDs, giving him 11 total scores on the season.

Payne was not to be outdone, though, finishing with season bests of 209 rushing yards and three scores. For perspective, the senior signal caller entered the game with 185 yards and four TDs on the ground. Rounding the rushing attack out was Skinner, who notched his fourth 100-yard game of the season (104 yards) and converted four 2-point plays.

The Mustangs have had a nearly immortal 2021, with a 17-0 record since the start of the 2021 fall II sports season. Head coach Eric Valley was able to reflect on all of these achievements, as New York State’s No. 1 Class C squad now prepares to play Section V’s East Rochester/Gananda (11-0) at noon Saturday at Williamsville South High School in the New York State Public High School Athletic Association’s Far West Regional.

“The (second straight) championship simply means we won another game. It was another step in our journey,” said Valley, whose Mustangs will be vying for their first-ever regional title. “I’m just as proud of my team this week as I am every other week.”

As strong as the running game was in the contest, the Mustangs’ D was equally formidable, stifling the hot Fredonia offense to 170 total yards and holding the Division I prospect Whitfield from multiple TDs for the first time all season.

But considering the elements on a snowy, November day in Orchard Park, Valley knew the Hillbillies would have to adapt their attack.

“The snow was key. (Whitfield) is a great athlete. I think the conditions favored us,” he said. “And our defense rose to the occasion.”

But to beat the Bombers in the state quarterfinals, Medina will need its starting offensive line — Chris Johnson, Roosevelt Mitchell, Ollie Wilson, Josh Wilson and Colvin Stalker — to keep clearing paths for the likes of Payne, Thompson, Poole and Skinner.