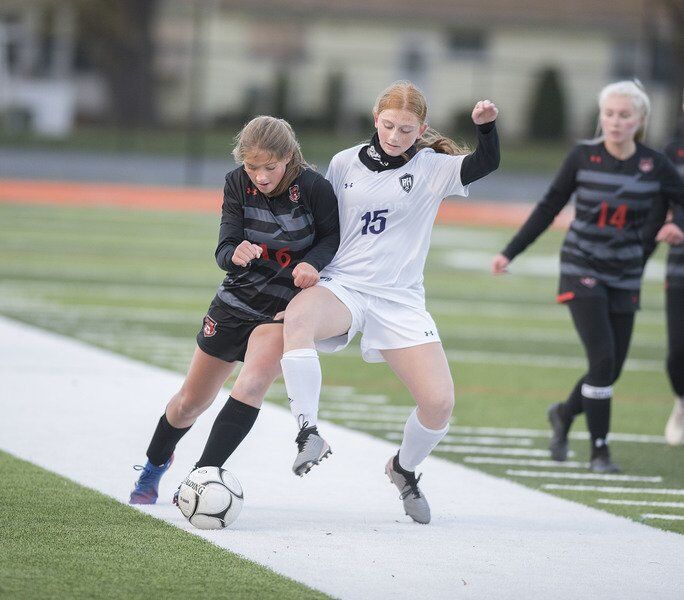 James Neiss/staff photographerWilson’s Rian Faery (16) and Roy-Hart’s Clare Janes (15) battle for position and control of the ball during the Lady Rams’ 3-2 win Tuesday at Wilson. Roy-Hart clinched its first league championship share with the victory. 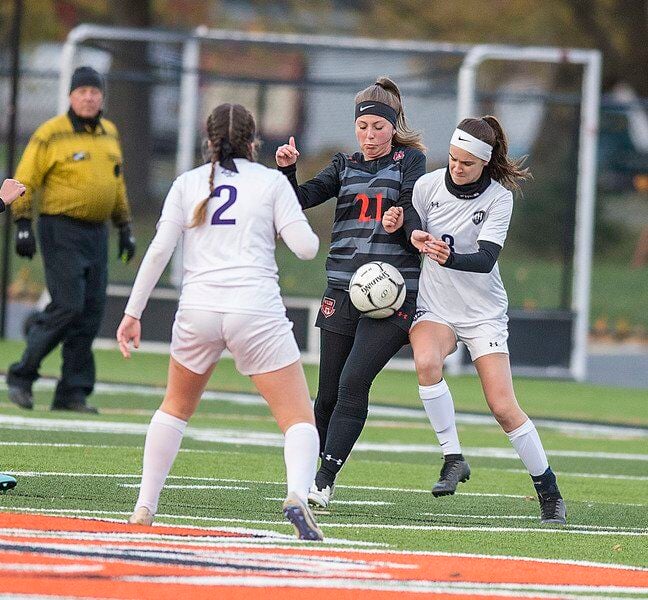 James Neiss/staff photographerWilson’s Rian Faery (16) and Roy-Hart’s Clare Janes (15) battle for position and control of the ball during the Lady Rams’ 3-2 win Tuesday at Wilson. Roy-Hart clinched its first league championship share with the victory.

WILSON — The Royalton-Hartland girls soccer team got to enact some revenge Tuesday night.

In a compelling, back-and-forth battle, the Lady Rams beat Wilson 3-2 in the de facto Niagara-Orleans League championship game Tuesday at Wilson High School. Roy-Hart (8-2 N-O) needed the win to split the share of the league title with the Lakewomen (8-2 N-O), making this the first N-O girls soccer championship in Lady Rams program history.

Much like the 3-0 win for Wilson back on Oct. 20, the game opened with a score within the first minute of play. But instead of the Lakewomen taking the early advantage, the Lady Rams came alive behind a score from Nadia White.

The Lakewomen fought back, though, taking a 2-1 lead into the break after Rian Faery and Lily Avery both scored on separate entry plays. Those two scores were notable due to the fact that they both came after Lady Rams defender Ada Livergood exited the game due to injury.

Reminiscent of the first half, Roy-Hart got on the board early to start the second, as Kara Choate knotted things at 2 less than two minutes into play. That score adds to what’s been an amazing season for Choate, as the junior has now recorded 17 goals.

There was a bit of a lull from there with missed shots on both ends, but once again White was the name that stood out when it mattered most.

The sophomore would score a go-ahead goal with less than seven minutes to go. That would be enough, as the R-H defense locked things down and kept the Lakewomen off the board and out of the zone for the rest of the action.

Thinking of that loss to Wilson in the first matchup, White and her teammates were relishing the chance to run it back.

“I think we’ve been waiting for this moment for a long time,” White said. “And we worked really, really hard. We were down by one and we didn’t give up. ... I think we came ready and we knew we had to give it our all from the first time.”

White added that she thought her team’s passing, running out on the break and hustling to the ball were all key to the win and getting good looks at the goal. With a shot at one of Class B-2’s top three seeds, she is confident in Roy-Hart’s chances at a Section VI championship.

Roy-Hart head coach Rich Jennings noted that White is coming into her own as one of the youngest starters on the team. In terms of what he thought was the difference between this matchup and R-H’s loss the first time around, there was one key that Jennings had in mind.

“I think nerves play a big part with the girls and the first game you could tell the nerves got the best of them a little bit,” Jennings said. “ ... We started flat in the first game, we gave up a goal in the first 30 seconds, that hurts. And then it gave Wilson momentum and we never got it back.”

Jennings really emphasized to the girls about being calm before this rematch, adding how prepared they all were to not make the game any bigger than what it was. He thought his team embraced that, leading to better results on 50-50 balls and a more aggressive style of play this time around.

One piece of note was Livergood’s return just about half way through the second half, which helped the defensive unit hold Wilson down after the break. Led by Livergood, Hannah Willard, Maddy Colley, Clara Jones, Amelia Konstanty and others, Jennings was pleased with the defensive showing.

“They work hard together, they’re really disciplined, we try to stay disciplined,” said Jennings, whose defense has yielded just 13 goals in 10 games.

“ ... When you see a teammate go down and get hurt like that, that’s hard no matter what. So to see them bounce back, and to see them respond... One of the things I told you last time we talked, resilience is the key. And once again our team showed resilience, continued to work, we continued to fight. They never gave up on each other, they never gave up on the mission.”

Jennings thinks the B-2 sectionals will be interesting this year, but he also feels the Lady Rams have a shot to win out. Depending on Saturday’s sectional seeding meeting, there will be a coin flip to determine who will be seeded No. 2 and 3 seeds between Roy-Hart and Wilson.

Wilson head coach Tom Baia said how proud he was of his girls even in defeat, as the Lakewomen earned their first share of the N-O title since a fourth consecutive league championship during the 2015 season. Although Wilson has dropped its last two outings, Baia reminded his squad that the postseason marks a “new season” of sorts.

“Again, we’ve accomplished a lot and we’re looking forward to sectionals,” Baia said. “Tonight’s game was a nip-and-tuck game. Roy-Hart came to play, and they played a little bit better than us tonight and they deserved to win.”

Baia thought the most trouble for the Lakewomen was handling White overall, as well as some of the defensive coverages the Lady Rams threw at them. He does not want to look past whoever will be Wilson’s first-round opponent, but Baia believes round three could be in the cards if both squads take care of business.

“Most likely we’d be matched up with each other, which would be a good feather in the cap for the league if it went that way,” Baia said. “That two teams are battling it out in the semifinals of the B-2.”