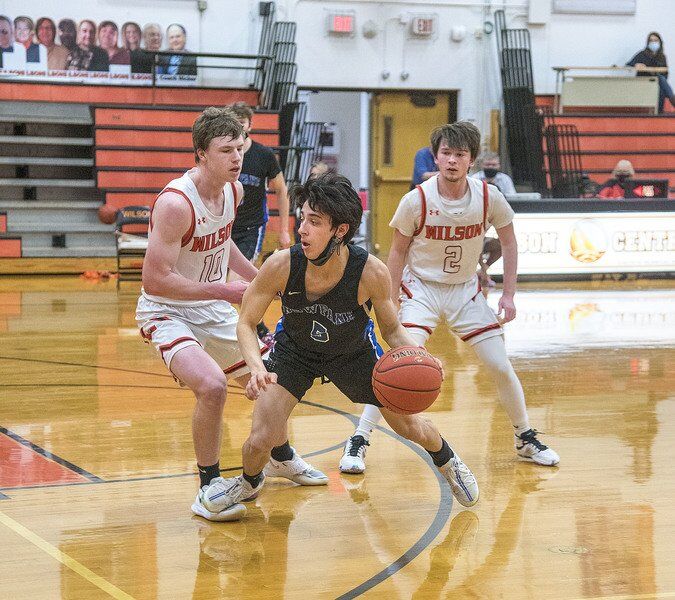 James Neiss/staff photographerNewfane boys basketball’s Jeremy Foltz (5) moves the ball Thursday during the Panthers’ road win at Wilson, which kept them undefeated in the Niagara-Orleans League. 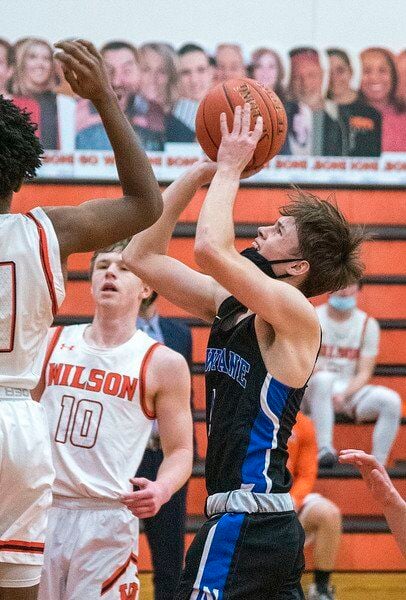 James Neiss/staff photographerNewfane boys basketball’s Jeremy Foltz (5) moves the ball Thursday during the Panthers’ road win at Wilson, which kept them undefeated in the Niagara-Orleans League.

WILSON — Now that their full squad has returned, the Panthers look ready for the Niagara-Orleans League.

Newfane boys basketball took a wire-to-wire win over crosstown rival Wilson on Thursday, as the Panthers smothered the Lakemen 52-29 at Wilson High School. The Panthers (4-1, 4-0 N-O) are undefeated in league play and could improve from here as players return from injury and COVID protocols.

Newfane got off to a 9-0 lead in the first quarter and never looked back, limiting the Lakemen (1-4 N-O) to one field goal to take a 17-3 lead in the period. Both squads would trade 3-pointers back in forth in the second, but the Panthers were still able to build on the strong first to make it a 34-12 advantage at the break.

Wilson did come alive in the third, though, cutting its deficit to 14 at one point behind the play of Mike Miller (8 points), Justin Messing and Ben Lyman (6 points each). But Newfane weathered the storm, building up a 19-point lead through three before holding the Lakemen to five points in the fourth.

The Panthers were led by Jeremy Foltz (12 points, 6 steals, 5 assists), Zack Snow (12 points, 3 threes), and Sam Capen (7 points, 9 rebounds, 4 assists), as nine members of the squad got onto the scoresheet. Newfane was hot from deep, with six different players recording a made trey.

“We’ve got good prep in practice so we can get ready,” Snow said. “ ... There’s stuff we’ve gotta fix up on defense, we were sloppy a little bit. We pick up the defensive rotations and defense leads to offense.”

Foltz talked about how the team came in with high intensity and a great mindset to play hard and aggressive for the win. With Thursday’s game being Newfane’s first with its full scope of players in some time, the senior guard discussed what his team’s ceiling could be.

“I think we can be a top team in Western New York,” Foltz said. “And hopefully play at Buff State and make it far.”

Snow hopes the squad can regain its chemistry as the full team returns, as well as remaining undefeated in the N-O to repeat as league champions after last season’s co-championship share with Albion.

Newfane head coach Eric Klumpp also mentioned chemistry and continuity, noting how difficult it’s been to be on the same page with so many players in and out of the lineup. The second half made this evident, with Wilson making its third quarter run while Klumpp experimented with different lineups.

“When you miss so much time, your conditioning goes and sometimes your muscle memory goes as well,” Klumpp said. “ ... It slowed us down a little bit, but it allowed me to see who’s meshing well with who. ... We had a great start to the game, especially defensively. But having this much depth will certainly help us in the long run.”

Having two guards like Foltz and Capen who can play on and off the ball, shooters like Snow, Tyler Oudette and Connor Gunby, as well as a trio of bigs with Deuce Capen, Michael Carmer and Cade Littman, Klumpp thinks this could be his deepest squad yet.

“Someone asked me how we were gonna replace Garrett (Srock),” Klumpp said of last season’s N-O player of the year. “And as these guys came up and they worked the summer on their own and they came to me, I thought that defensively we were a much more attached team. And so losing Garrett was big, but having guys that are role players that can shoot the ball so well is so dangerous.”

Wilson head coach Rob Linhart gave credit to Klumpp and his team, as Linhart pointed out the amount of work the Panthers put in as a group. Although the effort was there in his eyes, the Lakemen’s first-year coach believes that limiting turnovers is the one main area the team needs to improve on to get out of this slump.

Linhart says the third quarter run can be attributed to adjustment in Wilson’s 2-3 zone. He was glad to see his guys took well to that teaching from halftime and hopes the group can grow on the showing from that quarter moving forward.

One other thing that Linhart discussed was the fact that some hometown fans were in the stands to support the Lakemen. Despite it being a smaller crowd than in normal years, Linhart was able to enjoy having spectators back once again.

Wilson gets back on the hardwood 6 p.m. Tuesday when Medina comes to town. Newfane gets back at it 12:30 p.m. Saturday at home against Barker.