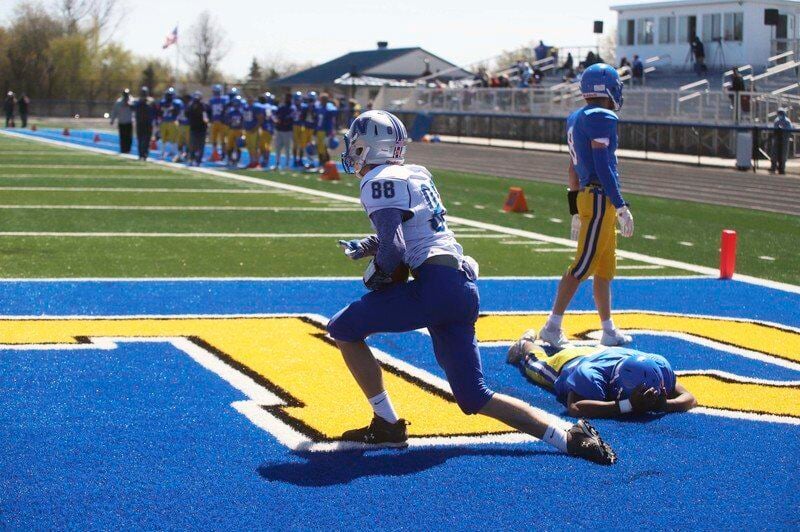 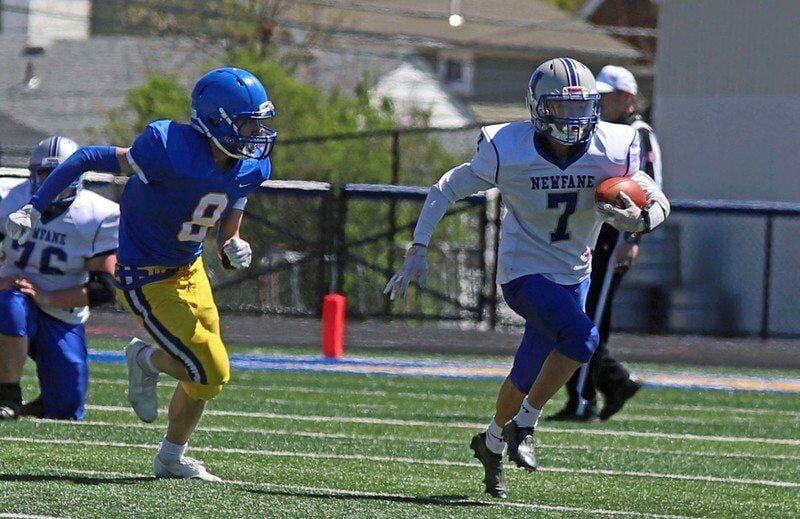 CHEEKTOWAGA — The Newfane football team has been slowed down in more ways than one this year.

The Panthers came up empty in Saturday’s Class C North battle at Cleveland Hill, 32-15. Newfane (0-3 C North) has been held back by COVID pauses all season, with this game being the squad’s first time playing in two weeks after a third stoppage.

It was the Nate Cummings show for Cleve Hill (2-1 C North) who toted the rock to the tune of 200-plus rushing yards and three touchdowns.

After Cummings put the Golden Eagles up 12-0 in the second quarter with his second score, Newfane’s Brett Bucolo was able to recover a Cleve Hill fumble as the squad was driving. That set up Zach Snow’s TD pass to Sam Capen, which was followed by a 2-point play for Scottie Penwright on a fire drill. That cut the Cleve Hill margin to 12-8.

The ensuing possession, the Panthers forced another fumble, this time with Jared Traverse falling on it. But it would not work in Newfane’s favor ultimately, as Snow was picked off by Cai’rhy Middlebrook.

The Golden Eagles’ next drive was sparked by a chunk play on a bubble screen, eventually giving Cummings the space to notch his third score of the day.

Newfane opened the second half with life, due to Michael Carmer putting an end to Cleve Hill’s opening drive with back-to-back sacks. That paved the way for Tyler Oudette and his big punt return, setting up the Panthers deep in Golden Eagles territory. Newfane would use some trickery to get back in the paint, with Trevor Heschke taking a reverse to the end zone for an 18-yard TD.

Although the score was 20-15, that last TD was the closest Newfane would make it in the second half. The Golden Eagles’ drive was highlighted by Cummings again, who racked up 87 of his 200-plus yards on the ground. Quarterback Montrice Webster was able to take advantage of that, rumbling in for a fourth-and-goal TD on a QB draw.

Newfane would begin driving again, this time with Snow finding Camden Rowles for a diving catch along the sideline. But he was picked off moments later when Josh Walters hauled in a tip-drill play.

Walters would play the foil again for the Panthers in the second half. The very next drive, he would take a Webster dump-off pass on fourth and short, taking that all the way to the house for a 34-yard score. Walters would then pick off Snow for a second straight drive, this time being right on the spot after Capen was unable to haul in a high ball on a one-handed catch attempt.

Although Cleve Hill did not score again, it was able to run the clock down to 1:34 once Newfane got the ball back.

Newfane head coach Chuck Nagel said things were better this time around with the Panthers latest pause because his squad was able to practice from Wednesday on heading into the game. Considering the zaniness that his staff and his kids have had all spring, Nagel thought Saturday’s effort was a positive showing.

“It seems like all year everything’s been thrown at these kids, but they’ve done nothing but stay positive. They come to practice when we’re allowed to and they work, they want to get better,” said Nagel, as his squad scored for the first time this season after back-to-back shutout losses. “We’re showing improvements every week, it’s just it’s that type of season man. We didn’t get the offseason that we normally get, a lot of new kids coming in, a lot of moving pieces. And I’m proud of these kids, they’re keeping their heads up and staying positive.

“A lot of teams, a lot of kids, might just hold their heads, shut down, quit, whatever man. Our kids are they exact opposite. They’re just happy to be here, playing football, and they’re getting better.”

Nagel really made sure to go after some of the top athletes in the district once he found out football would be played in this fall sports II season. That’s what’s brought out the likes of basketball players and adopted brothers Sam and Deuce Capen, as well as Heschke after he played soccer, golf and basketball this year.

“We really appreciate all these kids, but the kids that came out and said ‘Hey man, I haven’t played football in four years, but I’m gonna give it a shot this year,’ all they did was play little loop football,” Nagel said. “I watched ‘em group. High school kids kind of go in different directions ... (But) like I said, a good, fun group, from top to bottom, and I just enjoy the heck out of ‘em.”

Although the Panthers have not qualified for the Section VI playoffs, the team is looking ahead to play at least one more game at 2 p.m. next Saturday when they host C South’s Chautauqua Lake.