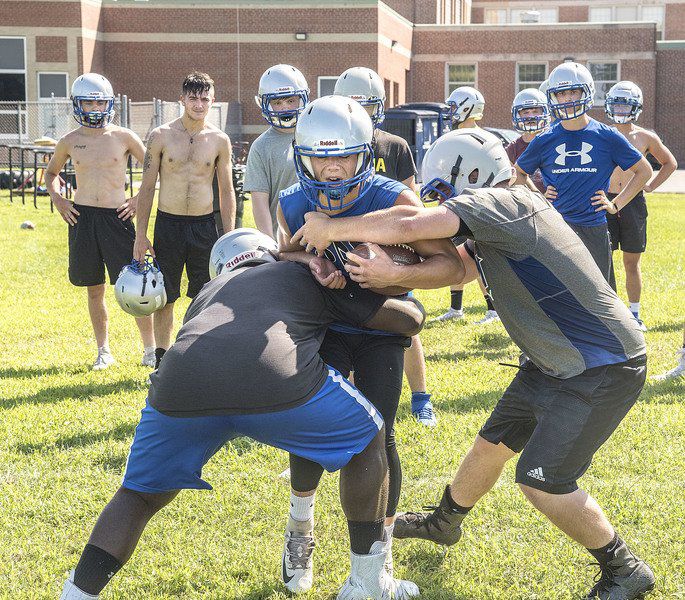 NEWFANE — Just a few short years ago, Newfane football was one of the struggling programs in Class B. Now, it's building a culture that can withstand over time.

The Panthers have taken their lumps in years past. Even when head coach Chuck Nagel initially took over the program in 2014, his first three seasons on the job were failed launches to get the program off the ground. But the last two seasons have been the turnaround that Nagel, his coaching staff and players have worked for.

Since 2017, the Panthers have an 11-6 record. Nagel has a vision for what this program can continue to grow into and he understands there's many factors that play into getting there.

"First of all, we've gotta stay healthy. Obviously, being a small school. injuries hurt us pretty big," Nagel said. "We've gotta stay humble. We know we have what it takes. But ... we don't want to get cocky. We want to stay humble. We want (the players) to know that any week, Friday or Saturday, any opponent in our division (or) our class can beat us if we don't."

Along with remaining humble, Nagel hopes he continues to mold smart football teams with players who keep their heads in the playbook and stick to their assignments. During the Newfane offseason, however, there was one other point of emphasis Nagel had for this year's group.

"What's big for us and our biggest priority this offseason is to be better teammates to each other," Nagel said. "We want to make sure our guys are gonna want to play for the guy next to them. So we've been talking about opening yourself up to some criticism. Don't build walls up. Whether a coach, a captain, a teammate says, 'Hey man, just try it this way.' You can build a wall and say 'F' you. Or you can keep those walls down and say, 'Hey maybe he's right.'"

Nagel knows his team has "the right ingredients" for success but his hope is that those little nuances all enhance the Panthers' chances in one of Western New York's toughest brackets, Class B. With schools like Cheektowaga, Maryvale and Albion looking to bring back strong teams, Newfane will look to avenge last season's disappointment by missing the Class B playoffs by one spot, finishing in ninth place at 5-4.

What may have hurt even worse is the fact that that playoff spot was also lost out on due to a loss in a tie-breaker by one point — a point that was lost after a blocked extra point in the team's 7-6 loss to Tonawanda last September.

One piece that Nagel feels will help in his team's quest for success is the strength of his coaching staff. He believes the staff has a chemistry with the kids naturally, with four of the team's six coaches currently working in Newfane High School. Defensive coordinator John Vosburgh now serves as the school's resource officer. Offensive line coach Chuck Baker is a retired investigator for the Niagara County sheriff's department as well, giving Nagel the confidence he's surround his roster with "quality adults."

Nagel has been getting things done with the triple-option offense, throwing defenses off with a scheme of misdirection, ball control and wearing down opponents. With an offense like that, it's necessary to have an strong engine to build it around. Enter Jaden Heers.

Heers will be entering his second straight season as the Panthers' primary ball carrier and the Newfane faithful hope he can put on an encore performance. The honorable mention All-WNY selection rushed for 1,238 yards and 12 touchdowns on a whopping 9.0 yards per carry last season. Nagel has the luxury of bringing his featured back into the fold another year after Heers made one of the most unique transitions in all of football.

"So Jaden, we were watching a JV game, and he was playing left tackle," Nagel said. "But we saw him playing middle linebacker on defense. And we're up in the booth (saying) 'Man, that kid is big and fast. What's he doing on the line?' So, sophomore year to junior year he transitioned over to running back and last year was his first year ever carrying the ball."

Nagel was glowing about the jump that Heers has made from year one to year two, specifically sighting the running back skill set that the 6-foot-1, 240-pound bruiser has been able to develop. The heavyweight state-championship wrestler knows he has tons of eyes on him this season and he hopes to run it back with a strong senior campaign.

Heers said his wrestling background prepared him for football.

"I just think the training for it, basically, train as hard as you train in wrestling as you do for football (with) the weight room and all that," he said.

Heers of course would love to reach the statistical measures he achieved last season, also placing second on the team with 67 tackles. But above all else, he wants to get Newfane back into the playoffs. A big push in that direction will be how well his offensive line plays in front of him.

Nagel made it a point to really highlight how the o-line is his strongest group on the team. He commended them for how much work they put in during the offseason and how that's transitioned over for them during training camp. With guys like Michael Carmer, Nicholas LaRock and Chance Caccamise up front, Heers should have clear holes and lanes to rumble through all fall. All three preached how being a dominating, run-first offense is all about pride in the trenches and how important they are to keeping the team's momentum intact each week.

With the Panthers' running a triple-option look, the team has several options available to direct the offense. That includes Dylan Finch, who will be entering his third year as a varsity player, and Josh Everett. Finch has helped Newfane reach these new heights and he believes the group's togetherness can only lead to more.

"Keep coming together, doing things together off the field," Finch said. "And keeping each other accountable for everything, on and off the field."

Finch wants to bring intensity to the defense and offense, so he can "keep the motor going for the whole team."

For Everett, he is just looking to bring a spark wherever he may be used. Last year, he was Newfane's Swiss Army knife. He finished third on the team with 535 all-purpose yards (197 rushing, 236 receiving, 102 returning), scored six touchdowns (3 rushing, 2 receiving, 1 kickoff return), placed third on the team with 61 tackles and recorded a team-high three interceptions.

With Everett's ability to move in space, he could be a deadly "lighting" in the option game, alongside Heers' "thunder" in the backfield.

"It's a mix of all sorts with Jaden behind me," Everett said. "How big he is, he can still move very fast and he can ground-and-pound and lower his helmet. And on the other end of the ball, I can pull that and I'm more of a shifty-type guy. I'm not one who's gonna run through somebody. So we've got all sorts of different options when it comes to the run game."