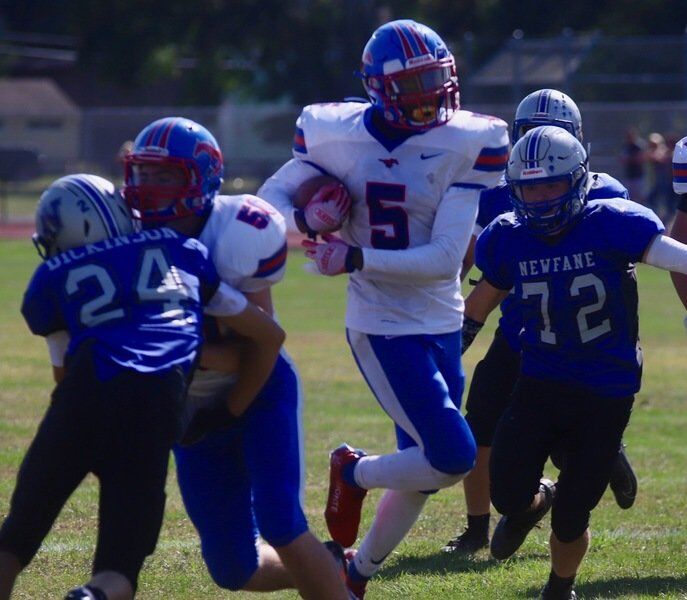 Medina's Robert Arnold (5) slips around a block by teammate Ollie Wilson (50) during a game against Newfane on Saturday in Newfane. 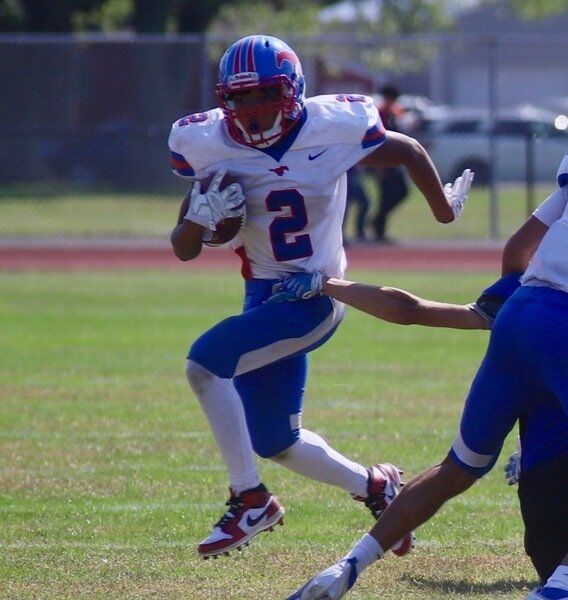 Medina's Iverson Poole carries the ball during a game Saturday at Newfane.

Medina's Robert Arnold (5) slips around a block by teammate Ollie Wilson (50) during a game against Newfane on Saturday in Newfane.

Medina's Iverson Poole carries the ball during a game Saturday at Newfane.

Not many programs can lose a Division I athlete like Brian Fry and not miss a beat, but after a 40-0 mauling of Newfane on Saturday, the Mustangs are humming two games into the season. They have outscored opponents 94-6 in the first two outings and the offense is still trying to find balance.

Rather than relying on one weapon, the reigning Class C sectional champions have surrounded senior quarterback Xander Payne with plenty of options. Despite significant depth in Class C North with fellow 2-0 squads Akron and Wilson, Medina has put up the ideal start on the path to returning to Highmark Stadium.

“It’s been a great start to the season so far,” Medina head coach Eric Valley said. “We lost some great seniors from last season, but some of our young linemen are stepping up. We were able to pick up where we left off (in the spring) without having to make too many changes from last year.”

Losing Fry’s 1,024 yards and 13 touchdowns from scrimmage to graduation — and a baseball career at the University of Toledo — would be debilitating to most teams, but four different receivers have caught touchdowns from Payne, who has been an excellent trigger man.

Payne followed a 10-for-16, 164-yard, three-touchdown performance against Bishop Timon by going 16 of 22 for 238 yards and three more touchdowns against Class C rival Newfane. He has also yet to throw an interception this season.

Jarin Rhim caught two touchdowns and Iverson Poole had another against Timon, but Payne found Albion transfer Greg Thompson twice and Joe Cecchini added a sliding grab against the Panthers. Rhim was the big play man against Timon, with 103 receiving yards and three total touchdowns, but Thompson racked up 116 yards against Newfane after not making a reception in the opener.

To make defending them more difficult, Medina also turned up its rushing attack Saturday. The Mustangs used a by-committee approach in Week 1, but sophomore Robert Arnold ran for 95 yards and two touchdowns on 11 attempts in Week 2.

“They make my job easy,” Payne said. “They’ll run the right routes. I just get them the ball and reap the benefits. … (The spring) was almost like a warm-up for me this season. We put in new plays in the spring and experimented with them there and now we’re bringing them in here.”

Should Medina power through the Class C North gauntlet — the Mustangs play Akron on Sept. 24 and Wilson on Oct. 8 — it has a chance to win back-to-back sectional championships for the first time in school history, coming on the heels of the school’s first title in 32 years.

“I have no regrets from last year,” Valley said. “Obviously it was a great experience and we want to build on that. If those opportunities present themselves, we’ll take them.”