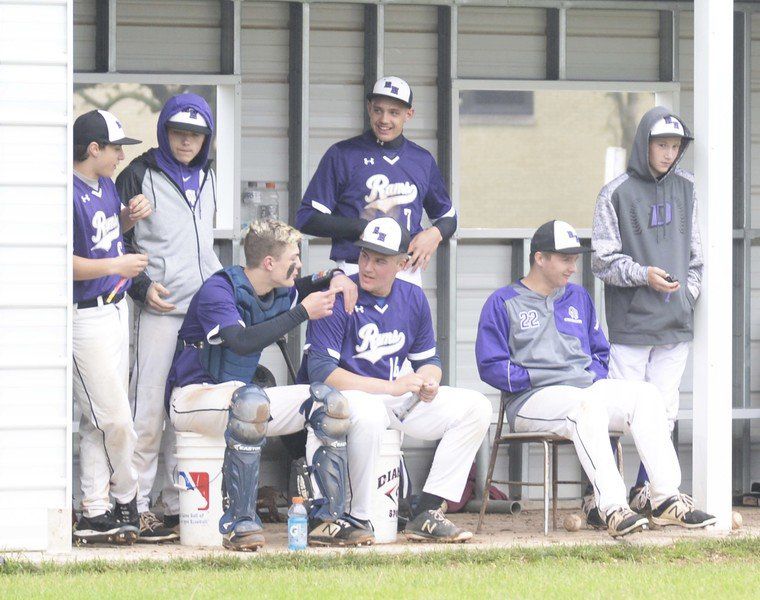 JOHN D'ONOFRIO/STAFFNot a care in the world 12 months ago, Roy-Hart baseball players looked on during a 2019 playoff win over Akron at Roy-Hart Elementary School Field in Gasport. 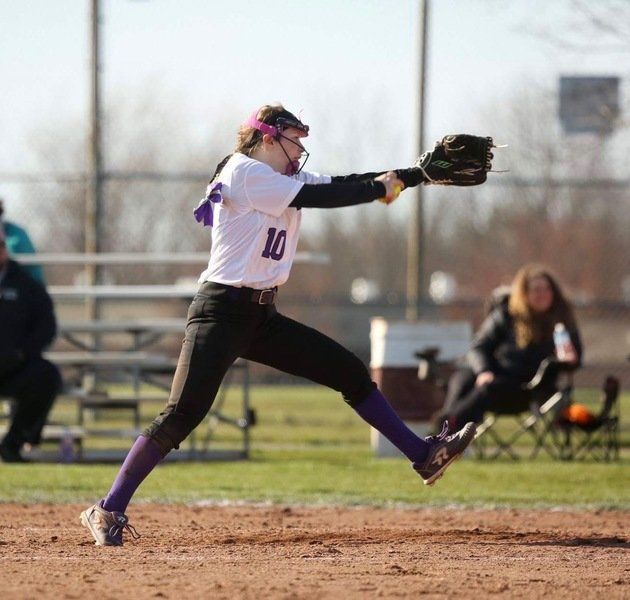 Contributed PhotoRoy-Hart pitcher Sam Choate fires toward home plate during a game last season. Choate was set to be the lone senior on this year's Lady Rams. 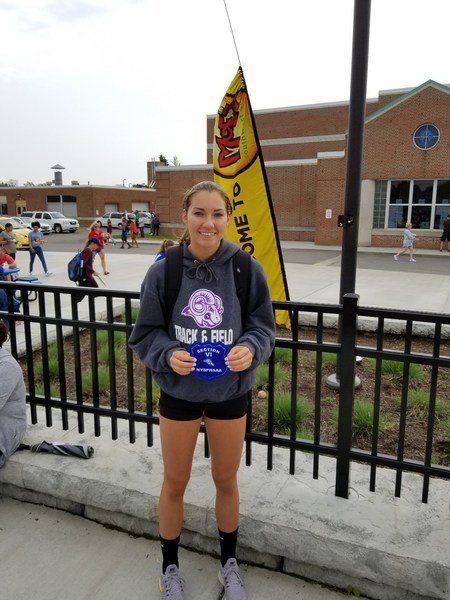 Contributed PhotoRoy-Hart track and field star Kali Scharping holds up hwer Section VI patch after winning the Section VI Class B-2 high jump as a junior during the 2018-19 season. Scharping entered her senior year as a state qualifier and the reining N-O player of the year. 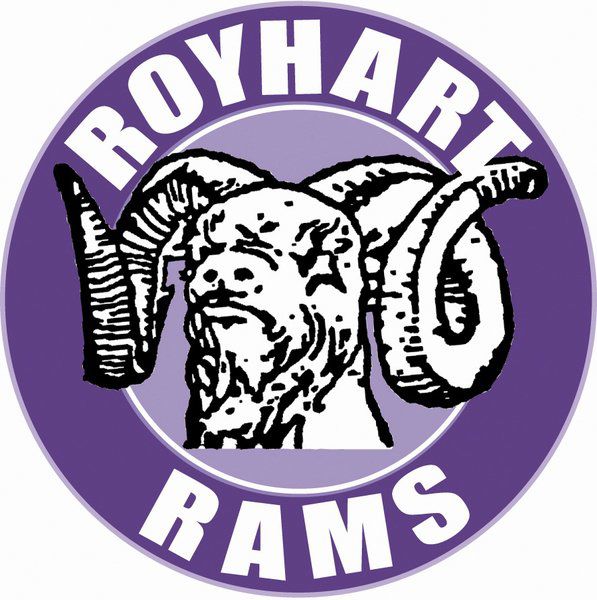 JOHN D'ONOFRIO/STAFFNot a care in the world 12 months ago, Roy-Hart baseball players looked on during a 2019 playoff win over Akron at Roy-Hart Elementary School Field in Gasport.

Contributed PhotoRoy-Hart pitcher Sam Choate fires toward home plate during a game last season. Choate was set to be the lone senior on this year's Lady Rams.

Contributed PhotoRoy-Hart track and field star Kali Scharping holds up hwer Section VI patch after winning the Section VI Class B-2 high jump as a junior during the 2018-19 season. Scharping entered her senior year as a state qualifier and the reining N-O player of the year.

MIDDLEPORT — As expected, “The Friendly Community” is keeping up a good face in the wake of the historic COVID-19 pandemic.

However, like other local districts, everyone's saddened by the drastic turn of events. Some of the Niagara-Orleans League's top athletes were geared up for another promising spring season outdoors at Roy-Hart.

About two weeks into spring practices, schools were closed throughout the state and sports were put on hold. All hopes of playing a shortened season were soon dashed and schools were closed for the duration of the 2019-20 calendar school year, officially nixing spring seasons for varsity and junior varsity baseball, softball, coed tennis and boys and girls track.

Here's a look at Rams seniors who did not get an opportunity to participate in spring athletics in 2020:

His captains in 2020 would have included seniors Reed Albee, Mike Huntington and Noah Draper.

One of the team's top two pitchers in 2020 was Albee, who also plays middle infield.

“He keeps the ball down,” Heideman said. “He doesn't throw super hard, but he's got good location and controls the game pretty good, He also has a very good stick.”

Huntington is a starting outfielder with speed to burn. “He could track a ball down real well,” Heideman said. “He's a leader. His hitting was starting to come around.”

Draper would have played either the outfield or third base. “He's another great leader and a good hitter who would have batted somewhere in the middle of the line-up,” Heideman said.

Coach Heideman added that he felt sorry for the seniors. “It's a pretty (bad) way to end your varsity career,” Heideman said,

Because of COVID-19, Lockport native Mark Kwoka's first year as the head coach of the two-time defending Niagara-Orleans League champion Lady Rams ended after just a few weeks of practice, but all things were pointing in the right direction for another solid season from the purple and white.

“She was our number two, but she would have been involved in a lot of games because we didn't want to take a chance and bury number one with a lot of games,” Kwoka said.

“Sam was one of the leaders on the team and someone who always worked very hard. Unfortunately, this was my first year with them and I didn't get a great deal of time to work with them. In years prior, having seen her play, she always came to play and had a great attitude and an optimistic view of the game. Sam is also a solid kid all-around, academically as well.”

Kwoka said it was his hope and the team's to continue its tradition of winning at Roy-Hart.

“There was a lot of positivity going into the season,” Kwoka said.

“We had so many kids who were returning from teams that had done so well and they were coming off two straight undefeated league seasons, so we were ready to just continue that. Winning is infectious.”

They've got game, but they've got the brains to go with it, said proud Rams head tennis coach and their physics teacher Doug Meyer, when asked about his senior contingent of student-athletes in 2020.

Leading the purple in white this past spring would have been first singles player Colin Dodge, a four-year varsity player who was considered one of the top singles players in the entire Niagara-Orleans League.

“He's a brain and a good kid,” Meyer said. “I teach physics and he was in my class. A good kid and vice president of the student council, which I also run. He's very active, very outgoing and very well liked.”

Besides tennis, Dodge excelled at swimming and golf at Roy-Hart.

Jason Kuchey was a net Ram who's already made quite a name for himself on the ice, being the top player on the Barker/Roy-Hart club hockey team. This was Kuchey's second year of tennis and would possibly have been a second or third singles starter for the Rams, Meyer said.

“He's another hard-working go-getter,” Meyer said. “Sometimes after practice he plays for another hour just for fun. A great kid.”

Also back was senior Kayla Hagen, who has already set school records in the pool.

“It's such a shame,” Meyer said about losing the spring season because of the COVID-19 pandemic.

“The biggest thing is they were anticipating playing again so much in their senior year and it's been taken away from them. They were all so bright and competitive and tackled all the sports they did to the fullest of their abilities. It's just a shame this had to happen,” he said.

Several Rams and Lady Rams were state and sectional hopefuls in 2020.

Among head coach Barry Webber's top boys' prospects this past season was senior Ozzie Moore, who would have been distance runner (1,600 and 3,200 runs).

“He was a sectional qualifier for us last year and we were looking for big things out of him this year,” coach Webber said.

After qualifying for sectionals in two events (400 intermediate hurdles and the high jump) senior Will Rickard was switching things up this season with plans to compete in the middle distance runs and jumps.

Rounding out the senior track participants at Roy-Hart, Jacob Palmer played football and was going to do throwing events, Eli Ostrander was a sprinter who Webber said had come a long way in his training and the school's valedictorian Aaron Bacon is a distance runner.

On the girls' side, long distance specialist Anna Rickard was back to compete in the 1,500 and 3,000  after qualifying for sectionals in both events last season.

Advancing to the state meet last year, returning senior high jumper Kali Sharping is the defending sectional champ and was hoping to get back to states.

Team captain Kennedy Lang ran distance events and is the school record holder in the 1,500 walk.

Rounding out the Lady Rams' key senior contingent was Jamie Seib, a sprinter and thrower; and thrower Paige Smith.

“It's just disappointing,” Webber said about the lost season.

“We had so many outstanding, strong competitors who were looking forward to greater things. Will, Ozzie, Anna the bulldog and Kali missing out on another state run — the seniors missed out on all of this. I feel bad. I wish them all well,” Webber said.