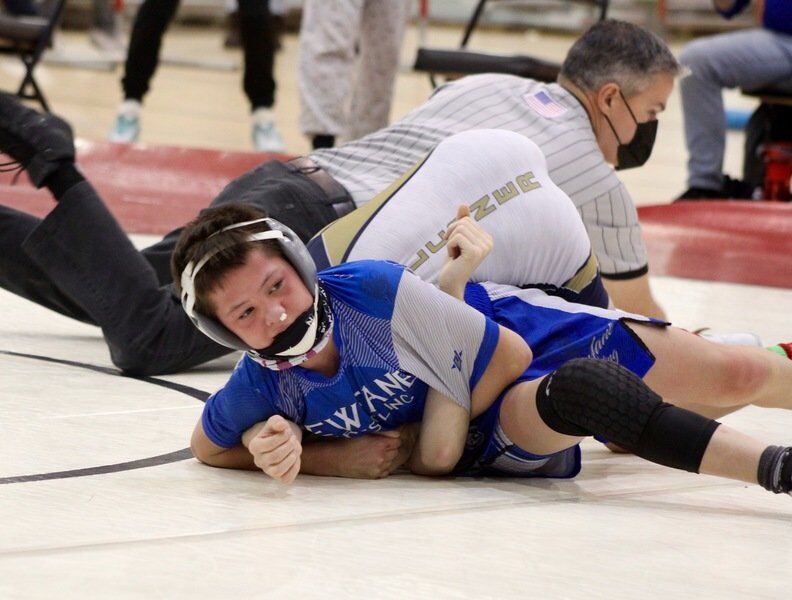 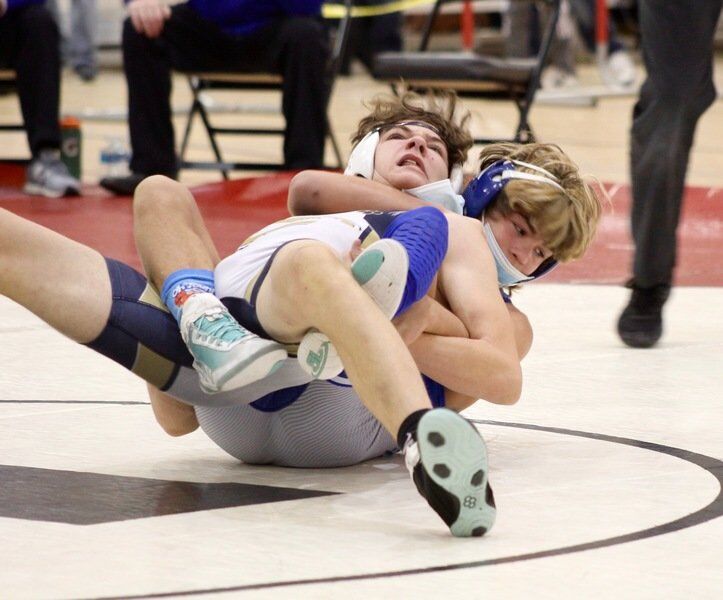 NEWFANE — Aidan Gillings remembers what it was like to wrestle varsity as a seventh-grader. The wins came easy, but acclimating to wrestling teenagers on the verge of adulthood is hard when you are only on the verge of being a teenager.

Gillings also remembers how a four-time Section VI champion made him and classmate Ayden Buttery feel welcome, like one of the guys. Andy Lucinski didn’t have to reach out to a seventh-grader, but he was once in the same position.

So Gillings studied Lucinski on and off the mat. It led him to a 43-9 record and a 99-pound sectional title in 2020. Now Gillings and Buttery are repaying the favor with the next crop of young Panthers.

Buttery and Gillings have both surpassed 20 wins this season, all while offering any knowledge possible for seventh-grade upstart Brayden Kellison-Neglia, who is off to an 18-4 start. All three even scored pins in Newfane’s win over Falconer in the Section VI Division II dual championship.

“Aidan shows what the hard work and love for the sport brings and I think Brayden does take that into consideration,” Newfane head coach Matt Lingle said. “He sees how Aidan attacks the room and attacks practice. Brayden is really learning how to be a good wrestler every moment, not just on that mat.”

Kellison-Neglia won the first 11 varsity matches of his career — 10 by fall — but the moment he began to realize he could truly compete at a high level came at the Linda Knuutila Memorial Tournament on Dec. 18.

He won his first two matches but ended the tournament with three consecutive losses to finish fifth at 102 pounds. He then lost his first match of the Akron tournament the following week.

He was a little nervous and didn’t know if he was capable of being a full-time varsity wrestler, yet even in defeat, he realized it was a task he could handle. Much of it comes from watching Gillings and Buttery, who have combined to win 141 matches in less than three seasons.

“It motivates me — if they can do this, I can do this,” Kellison-Neglia said. “However good they can be I can be and be even better. You just have to put your mind to it.”

Since those four consecutive losses, Kellison-Neglia has won seven in a row, including a pin of Falconer’s Karsen Lundgren in the final minute of the 110-pound match of the sectional dual finals.

Kellison-Neglia was wrestling one class heavier for the dual, but he had the strength to secure an opening-match win. Now he not only knows he can be a mainstay in the Newfane varsity lineup, but he has eyes on contending for a sectional championship.

“Brayden’s having an excellent season,” Gillings said. “He’s really strong, a little bit light but not cutting weight at all. He’s got the pinning power to do it and he’s putting kids to bed.”

The pay-it-forward attitude within the program extends beyond Gillings (23-0) and Buttery (20-5). In time, Kellison-Neglia will be asked to provide his wisdom to up and coming wrestlers and it won’t be a chore.

Modified and junior varsity kids are part of the Panther practice room and varsity wrestlers are not above sharing small tips with young talent in order to help refine their skills. Five Newfane wrestlers — Buttery, Gillings, Lucinski, Adam Huntington and Ryan Nugent — have won at least 20 matches as a seventh- or eighth-grader since 2016.

“All those modified and the JV kids get the experience and pick up something new,” Gillings said. “When a JV kid is wrestling a varsity kid and the varsity kid hits a tough move and the JV kid doesn’t understand it, we take the time to explain and he implements it into his game.”