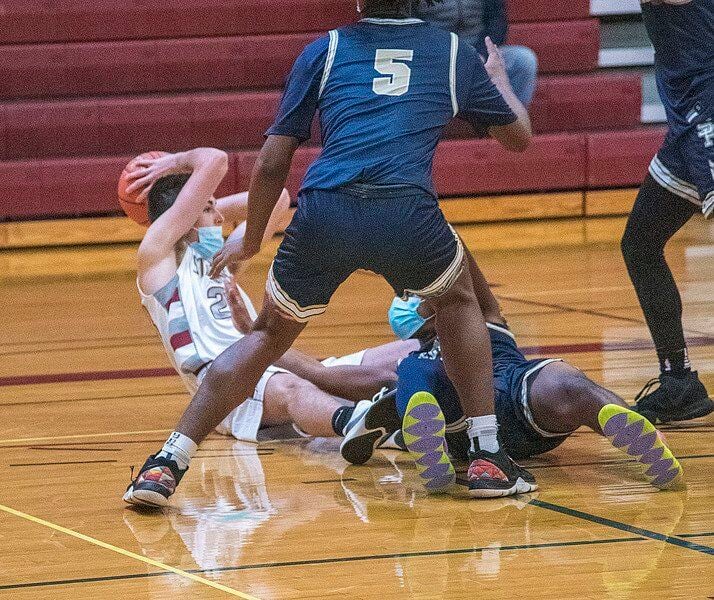 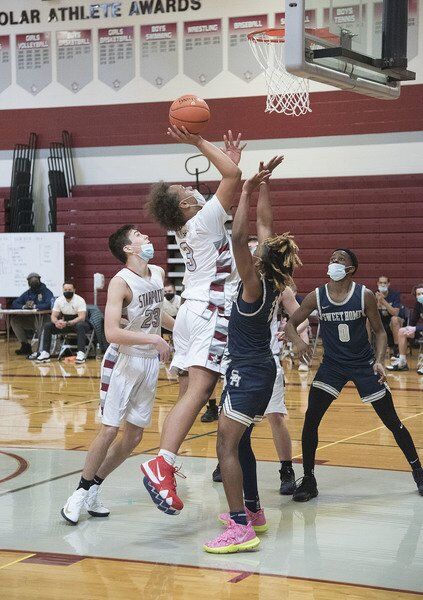 James Neiss/staff photographerStarpoint's Dexter Brooks puts up a shot over a Sweet Home defender during a home loss Saturday.

James Neiss/staff photographerStarpoint's Dexter Brooks puts up a shot over a Sweet Home defender during a home loss Saturday.

PENDLETON — There will be a lot of learning going on for the Spartans in 2021.

Starpoint boys basketball fell at the hands of ECIC rival Sweet Home, as the Panthers took a 76-37 win Saturday at Starpoint High School. It's been a slow start for the Spartans (0-5 ECIC II), but the emphasis for the team right now is more about growing after the layoff from the pandemic.

"It's good to have the kids play and have some normalcy in their lives," said Starpoint head coach Gil Licata. "And I'm really excited about that. They keep on working hard, we practiced as much as we could and go from there."

Starpoint dug itself a tough hole, as Sweet Home (3-0 ECICII) got off to a 9-0 lead before building a 20-11 margin after one. The second quarter stretch may be what did the Spartans in, as the Panthers had a 21-4 period in which they limited Starpoint to zero field goals.

Starpoint did fight back in the third, putting together a better showing with a 19-10 quarter. The Panthers, however, put on the finishing touches from there, with a 16-12 final frame to secure the win.

Licata knows how formidable the ECIC is, as he noted how tough the slate ahead is with Williamsville East and South next week. And although wins have been tough to come by thus far, the Spartans' head man will continue to teach them as the season unfolds.

"We told 'em it's real easy ... have fun and be safe. That's the way life is right now," said Licata, who has a deeper roster of 16 this season in case kids need to quarantine. "Have some fun and be safe. Great kids, great, great kids, they're positive. We make a lot of mistakes but we work through 'em. I can't say enough great things about 'em."

Brooks shared how frustrating it was early on in the pandemic, as he tried his best to bring his teammates together for safe workouts in the offseason. It may not be the ideal start to his senior season, but the 6-foot-3 swingman has kept steadfast in his message to the group.

"The main thing I just keep telling my team is we've just gotta work harder," Brooks said. " ... The only way we're going to even be able to stand a chance is if we're just working harder than them, that's what it comes down to."

On a brighter note, Sam Walters scored eight points in the outing, aided by two 3-pointers. Those two treys pushed Walters to 87 career made 3s, breaking the program record last held by his older brother Ben, who totaled 85 in his Starpoint tenure.

"I mean he's the one that kind of helped me where I am now," Sam said. "I give credit to him and my mom."

Ben, a former SUNY Cortland guard who currently plays for the American Basketball League's Binghamton Bulldogs, was able to offer thoughts on knowing his little brother took down his school record.

"As an older brother it’s an awesome feeling. To see my brother playing in the driveway as a kid to now being able to beat a number that I set a few years before him," said Ben via text message. " ... I’m happy for him, though. That’s sick and he’s got most of the season left."

Starpoint gets back to it 6:30 p.m. Monday, as the Spartans head over to Will. East to play the Flames.