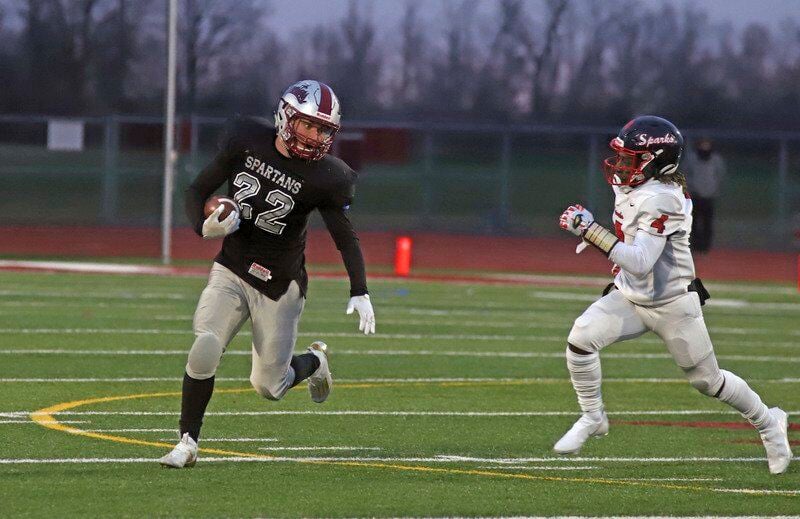 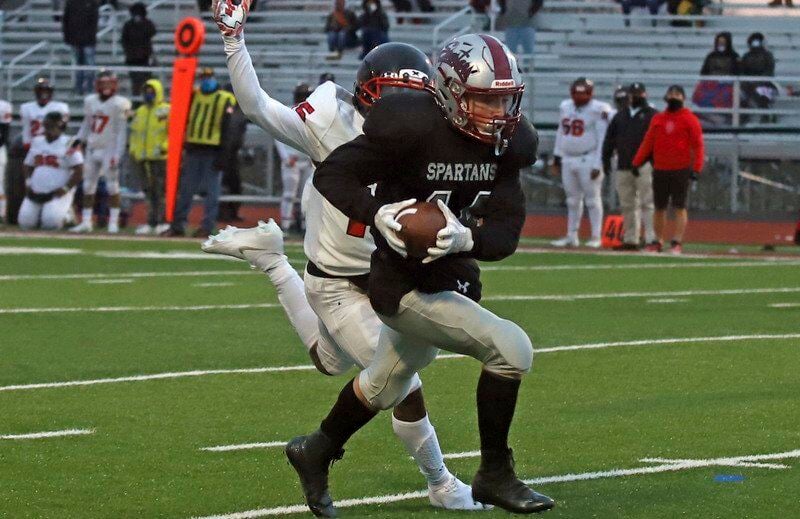 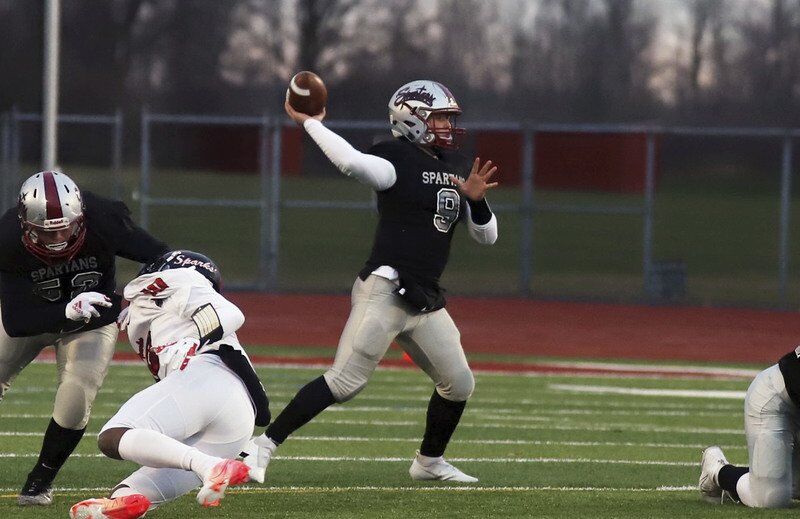 PENDLETON — Starpoint football did not get to start 2021 the way it would have liked.

The Spartans had a slow go of it in their home opener, as defending Section VI Class A champion South Park took a 38-13 win Thursday at Starpoint High School. The Spartans (0-1 Class A2) were unable to open the Tim Racey head-coaching era in winning fashion.

The Sparks (1-0 A2) did not seem to be too big of a goliath early, as Starpoint’s Landon Grainy recorded his first of two fumble recoveries on the night after Parrell Fulgham coughed it up on an early SP drive. The Spartans converted two fourth downs from there, first a 27-yard wheel play from Carson Marcus to Nathan Lee, before Marcus scrambled for another to push the Starpoint drive along.

But FCS Robert Morris commit Marqwan Fluitt got a nice tackle for loss on third down before another Sparks stop on fourth. That led to Fulgham making up for his early mistake with a 41-yard screen play to set up the Sparks, as they closed the first quarter knotted at zero.

That’s when it become Keith Jackson time, as the All-Western New Yorker scored his first touchdown of 2021, before SP got a 2-point conversion to make it 8-0.

Fluitt and the Sparks’ D kept pressure on Marcus from there, as Starpoint failed to generate much movement offensively. The Sparks were stingy, even picking Marcus off on a fourth-down play in the second.

To cap the half, Jackson ran in another TD and caught a 2-pointer from Mykell Hepburn, pushing the South Park lead to 16-0 at the break.

The Spartans had early signs of a comeback in the third, as Marcus weaved through the Sparks d-line to find Lee for a 25-yard toe-tap TD, setting up Dominic Grandinetti’s PAT to make it 16-7. But that’s when the turning point in the game came for both sides.

After a failed Spartans onside kick, the Starpoint D forced a turnover on downs. The Sparks, however, forced a fumble from Marcus the very next play.

But what was even worse for Starpoint was its quarterback was done for the game due to a chest injury, finishing 7 of-14 with 113 passing yards, one TD and one INT each.

The Spartans seemed deflated from there, with Luke Davis stepping in at QB and struggling to field snaps. The Sparks took advantage, leaning on the running game to the tune of 222 yards, as Jackson punched it in for two more scores in the second half.

Fulgham and Giovani Pagan also got in the end zone, as the Sparks had eight different ball carriers in the contest. Leading the charge, though, was Jackson, totaling 23 carries for 133 rushing yards and three TDs.

The Spartans did get a nice lift late from Lee, as he scored his second TD of the season on a 67-yard kick return TD. Lee also added three receptions for 50 yards on offense.

Although not the ideal start, Lee thought there were more positives coming out of this matchup with the defending Class A champs.

“I thought it was a really great job ... especially the kids from JV filling big shoes,” Lee said.

“Especially having Aiden (Davis), (Jake) Dean and (Joe) Carlson leaving. This was a tough loss for sure, definitely some plays we could’ve made, or we should’ve made. But we’re gonna go back to film tomorrow, watch those, correct those. And I really feel that we’ve got a good group of guys here that are young and we can build upon and we should be good to go rolling forward.”

After years as an assistant with Starpoint, Racey is now entrenched as the head man while Al Cavagnaro handles duties at the modified level. Joining him will be Steve Hart as an assistant coach, as well as former standout player Evan Majewski, who will be commanding the defense.

Admitting that “Rome wasn’t built in a day,” Racey believes that even being out on the field Thursday helped the Spartans take strides into the right direction.

“Coach Majewski had a great defensive plan going in, it looked OK there,” Racey said.

“I know that not scoring on that first drive was tough for us and then you could see a little bit of steam come out when we had a nice long completion down there inside their 10 (from Marcus to Hunter Briggs) and failed to convert the second time.”

Racey made sure to tip his cap to the Sparks, noting how they had great athletes with speed and size on both sides of the ball. He believes that’s what kept Marcus under pressure all night, as well as limiting the rushing attack in the negatives when you add in sack totals.

The new head man hopes to have his signal caller back for week two and he plans to shore up the pass protection so Marcus isn’t getting banged around like he was Thursday.

But being back on the field after a year of uncertainty with the pandemic was much more of a focus for Racey.

“We can talk about X’s and O’s, and everything like that, but just the fact that we’re out here playing and getting these kids to play the game is probably, at least in my mind, the best achievement that we had tonight,” Racey said.

“The fact that we had two teams out on the field here (and) got to play football. For the last 18 months, we’ve been cooped up. I don’t know exactly what South Park had to deal with, but our workout cohorts we had nine kids for 45 minutes, that’s all we were allowed to have. ... Mentally, these kids need to be out here playing, not just football, all the sports.

He continued: “We’ve gotta ... get these kids back to school full time and I just think ... yes we did lose, but it was a mental win for the kids and being able to have them play football, that’s for sure.”

Starpoint gets back to work 7 p.m. April 9 when Kenmore East visits Tudor Stadium.