Wilson’s Luke Atlas finds a lane to burst through the Newfane defense during Thursday’s Class C North contest in Wilson. 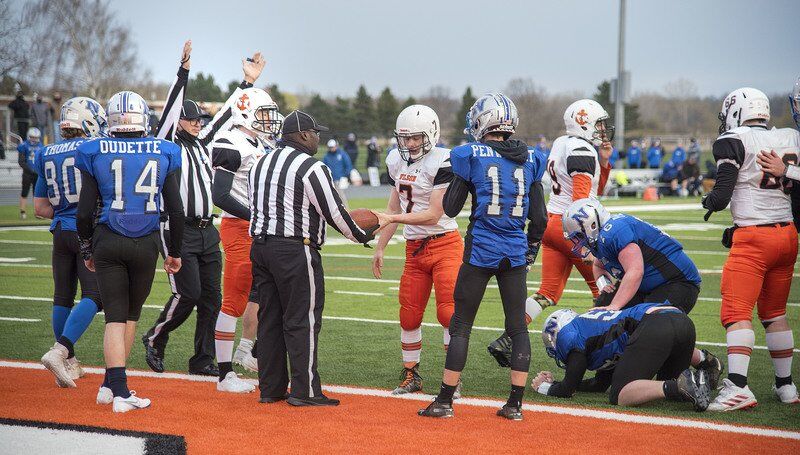 Wilson’s Anthony Dispenza hands over the ball to an official after scoring the first touchdown of Thursday’s Class C North game against rival Newfane at Wilson High School.

Wilson’s Luke Atlas finds a lane to burst through the Newfane defense during Thursday’s Class C North contest in Wilson.

Wilson’s Anthony Dispenza hands over the ball to an official after scoring the first touchdown of Thursday’s Class C North game against rival Newfane at Wilson High School.

WILSON — The Lakemen were able to get back on track Thursday night.

Wilson football held its crosstown rival scoreless, as the Lakemen flexed for a 21-0 victory at Wilson High School. Just six days removed from falling at the hands of Class A2’s Williamsville South in non-league play, the Lakemen (1-2, 1-1 Class C North) got their first win of the 2021 spring season.

Wilson pounded the rock early and often, with Luke Atlas taking eight straight carries to start the game, bleeding out over half of the first-quarter clock. But Newfane (0-2 Class C North) did not fold, forcing an Atlas fumble that was recovered by Brett Bucolo.

The Panthers would show glimpses on offense, but it was to no avail. QB Zach Snow danced for an 11-yard run before Ben Mahar stopped all Newfane momentum with a strip-sack fumble, with Anthony Dispenza taking the recovery.

That set up Dispenza, who got Wilson on the board as he took a fourth-down carry for a conversion, then a 1-yard plunge to pay dirt. The Jared Jaques PAT made it 7-0.

Both squads would trade punts throughout the second, with Newfane turning it over on downs as well. The Panthers also looked to punt later in the period, but Mason Branca came in with a block to stop it, with Wilson’s Matt Carr jumping on the loose ball.

It looked like Tyler Yousett would lead the Lakemen down for a score before the half. But with a sack from University at Buffalo wrestling commit Andy Lucinski, then a pick from Xavier Thomas, the score remained 7-0 at the break.

But once halftime ended, it was all Wilson. Jaques was able to pick Snow off, resulting in a return TD to put the Lakemen up 14-0. After another Panthers turnover on downs, Yousett took in a 1-yard QB sneak to salt the game away.

The Panthers showed signs of life late, driving all the way downfield to the 1-yard line. But Newfane was denied, turning the ball over on downs again on a fourth-and-goal play with time expiring.

Atlas finished with 108 rushing yards and Branca added another 35 yards from scrimmage in the win. The Lakemen running game was strong, totaling 148 yards, which limited Yousett to only three passing attempts. Defensively, Dispenza and Mahar recorded three tackles each, while Ben’s brother Evan added the team’s other sack.

For Newfane, Snow had a tough day in the air with 4-for-18 passing and two interceptions, but he also notched 72 rushing yards. He also was the Panthers’ leading tackler at three.

Atlas knew things would be different this week not having to play a squad two size-classes above like Will. South. Having a familiar opponent across the field, the junior tailback thought his line worked wonders in springing him free.

“I felt like the front five ... the linemen, they did a really, really good job up front,” said Atlas, son of Lakemen head coach Bill Atlas. “I got really good blocks all game. I think I only had three carries for loss. I didn’t have many, so the front five carried the whole time. They did a very good job.”

Newfane head coach Chuck Nagel had a tough task on his hands, as the Panthers are just returning from a 10-day COVID-19 pause after the season opener against Medina. Nagel has been frustrated by not being able to work with his kids due to quarantine protocols that have left the roster in shambles.

“You take one of the most complex sports in football, where you’ve got 11 bodies on each side of the ball trying to do their thing. It’s impossible,” Nagel said.

Nagel was most pleased with his defense for flying around, especially since the Panthers yielded 50 points to Medina in Week 1. But the troubles remain on offense, as Newfane has yet to score a single point through eight quarters of action.

With kids quarantining last second, depth has been an issue. Whether it’s losing two-way starters, or only loading the bus with six healthy linemen and one fullback, the struggle has been real for the Panthers.

“These kids got to come out and play Thursday night against their rival. Win, lose, or draw, man, we played a game — a game we didn’t think we’d get to play this year. I didn’t think it was gonna look pretty today. It didn’t, but I tell you what, at the end of the game, we started clicking a little bit. I think we got some confidence, which is big.”

The Panthers are also being impacted by schedule adjustments. Due to the pause of their Week 2 game with Tonawanda, Newfane will be playing three games in a nine-day span. The Panthers will kick off next at 7 p.m. Tuesday when they visit the Warriors.

Next up for Wilson is a 7 p.m. tilt next week Friday at Medina.

Lillie B. White peacefully transitioned into eternal rest April 26, 2021. Lillie will be greatly missed by her family and friends. Please visit Taylorandreynolds.com.