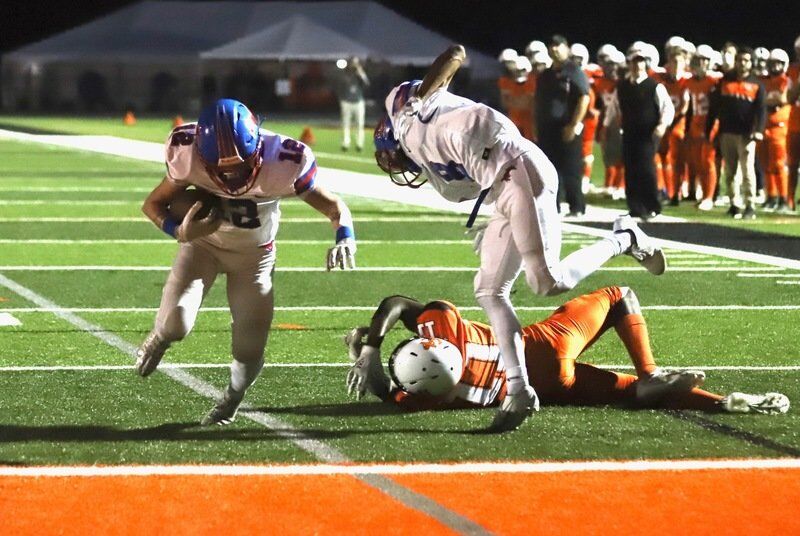 Paul Battson/ContributorMedina's Cayden Lilleby (12) scores a touchdown after Greg Thompson's (8) block on Wilson's Paul Smith (11) during a game on Friday in Wilson. 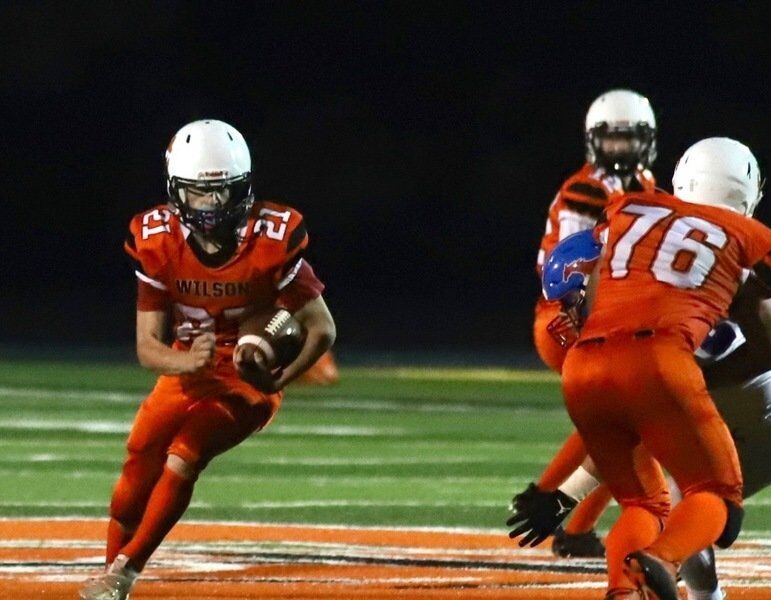 Paul Battson/ContributorWilson's Evan Wolfe (21) scoots free on a block by teammate Matt Carr (76) during a game against Medina on Friday in Wilson.

Paul Battson/ContributorMedina's Cayden Lilleby (12) scores a touchdown after Greg Thompson's (8) block on Wilson's Paul Smith (11) during a game on Friday in Wilson.

Paul Battson/ContributorWilson's Evan Wolfe (21) scoots free on a block by teammate Matt Carr (76) during a game against Medina on Friday in Wilson.

WILSON — Medina weathered the early waves of resistance on a dank Friday night visit to the shores of Lake Ontario, and the Mustangs strode for another runaway victory to remain unbeaten.

Xander Payne passed for four touchdowns, Greg Thompson and Iverson Poole both scored twice, and Medina pulled away in the second half to win 44-13 at Wilson and improve to 5-0 on the season and 3-0 in the Class C North division.

“In the first half we were kind of shaky, a little rusty,” said Payne, who completed 10 of 17 attempts for exactly half of the Mustangs’ 341 yards. “But we really showed up in the second half.”

The Mustangs won each of its five games in blowout fashion, but the Lakemen was able to keep it close for half of the homecoming game at Walter J. Hutchinson Field.

Wilson (3-3, 2-2) stiffened up on defense after allowing touchdowns on three of Medina’s first four possessions. Luke Atlas finished a long drive with his sixth rushing touchdown of the season and Chris Dispenza recovered a fumbled snap in the end zone to cut Medina’s lead to 18-13 going into halftime.

The Mustangs shut out the Lakemen over the final 28:27 and scored four unanswered touchdowns to close out the victory.

“Wilson gave us all they could in the first half,” Medina coach Eric Valley said. “We were having trouble running and they were having success running the ball. We challenged our kids in the second half to to block and tackle better and it will take care of itself. And it did. The kids really stepped up.”

After tossing three touchdowns in each of the first four games, Payne connected with four different receivers to set a season-high.

“I’ve got all I can ask for on this offense,” Payne said. “Most teams would ask for one or two of the guys I’ve got. I have five or six weapons I can go to, running or throwing.”

Payne threw a 34-yard touchdown pass to Thompson on the opening drive and Cayden Lilleby scored his first of the season on an 8-yard pass from Payne that made it 12-0 within the first five minutes.

The Mustangs failed on six point-after tries before Dominic Larabee ran in a 2-pointer following the final touchdown.

Poole led the defense with seven tackles (two for loss) and two pass breakups. Rihm broke up a fourth down pass in the end zone in the fourth quarter. Thompson, Larabee and Chris Johnson each had six tackles.

Medina hosts Tonawanda next Friday night while Wilson travels to Alden on Saturday.