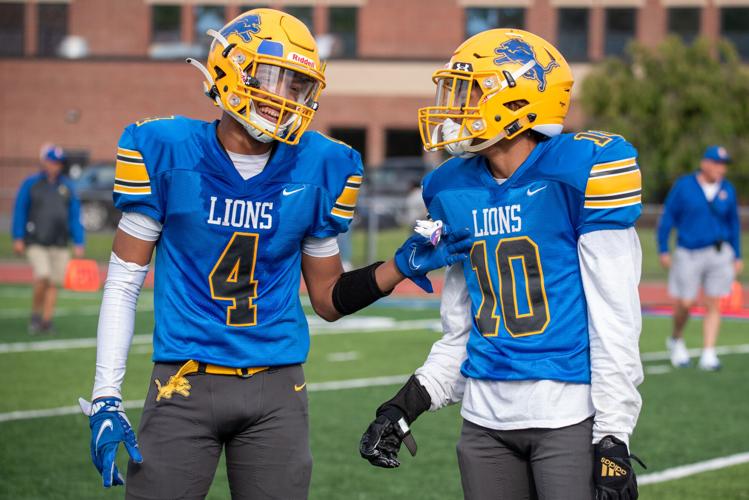 Lockport juniors Karmyne (4) and Kyree (10) Jones chat while walking off the field following a game against Niagara Falls on Saturday at Max D. Lederer Stadium. 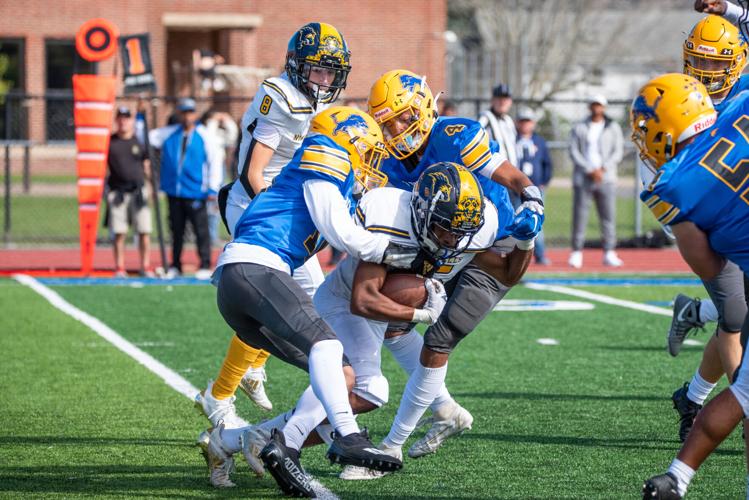 When Karmyne Jones slid in front of a pass and tapped his feet inbounds to secure the interception, his twin brother Kyree immediately knew he had to make a play to match.

Kyree wasn’t putting his own success ahead of the team’s, there’s just a competitiveness inherent in brothers, especially twins. The Joneses have the same facial features, the same haircut and even sound alike. It’s only natural that competition is how they try to stand apart.

The Lockport juniors are key contributors to the defense. Kyree has made 25 tackles from his safety position while Karmyne, a linebacker, has an interception in all four games this season.

The duo combines the versatility to play multiple positions with a perpetual drive to be better than each other and opponents. It's a competition that spans from breaking furniture during childhood wrestling matches in the living room, to the football field, the basketball court and even in video games.

Now that spirit is a problem for opponents to handle.

“I think they challenge each other,” Lockport head coach Trait Smith said. “That’s that twin thing. They always want to be better than each other. They’re always challenging themselves. I don’t have to put that challenge out there. They bring that challenge with them.”

Although the Joneses will compete in any game, regardless of how minuscule, they are always devoted to each other. They would rather play together than against one another. Karmyne is slightly taller than Kyree, but people call them by the wrong name anyway, even though Karmyne still claims he’s more handsome.

“We work together, we go to school together,” Kyree said. “We do everything together.”

Smith has given up deciphering the two. He'll simply cals “Jones!” and the right one usually answers. Part of that is an ability to read each other’s body language or facial expression to gather thoughts without verbally communicating.

“We look at each other and we know the plays,” Karmyne said. “I can just let him know to stay back or play it safe.”

They are so intuitive that it’s not uncommon to see both of them arrive at the ball carrier at the same time. Their football acumen and athleticism allows the Lions to use them with variety. Karmyne not only plays linebacker, but can cover receivers in the slot, while Kyree is big enough to play near the line of scrimmage if needed.

“They’re great kids and I love them to death,” Smith said. “They do whatever we ask. They watch film and they love to play the game. I think that’s what brings their talents out — they’re able to understand what the game’s all about.”

Neither Jones could think of many ways in which they differ, but there are a few, including Karmyne being right-handed and Kyree being a lefty. They have started to consider what colleges they might like to attend and there’s a strong chance it will take them in opposite directions.

Even though the thought has penetrated their minds, it’s not a topic they want to think about often at the moment, even if separating saves a few punctured dorm walls when a wrestling match breaks out.

“It’s shaky, it’s really shaky,” Kyree said. “Losing my brother, I don’t think I could do that.”