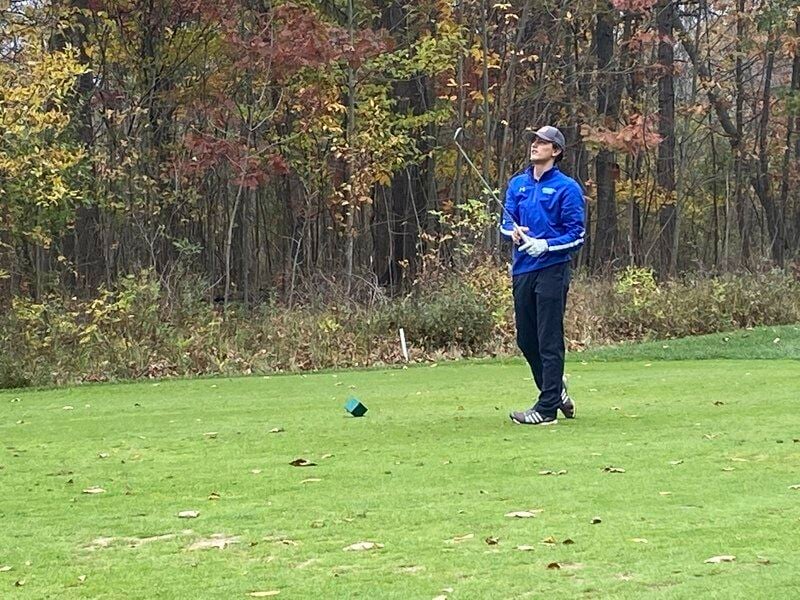 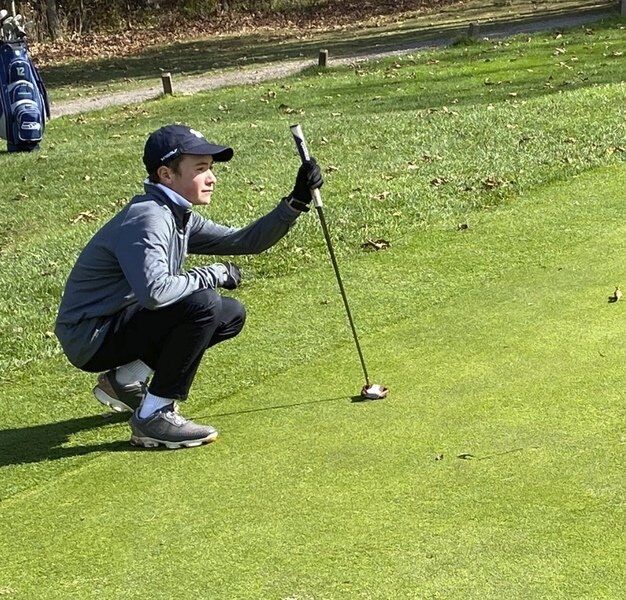 Khari Demos/StaffWilson's Nathan Meyers lines up to chip in a putt, Saturday at Willowbrook Golf Course. Meyers finished second in the Niagara-Orleans League golf tournament, notching an 85 round and the No. 7 spot in league standings. 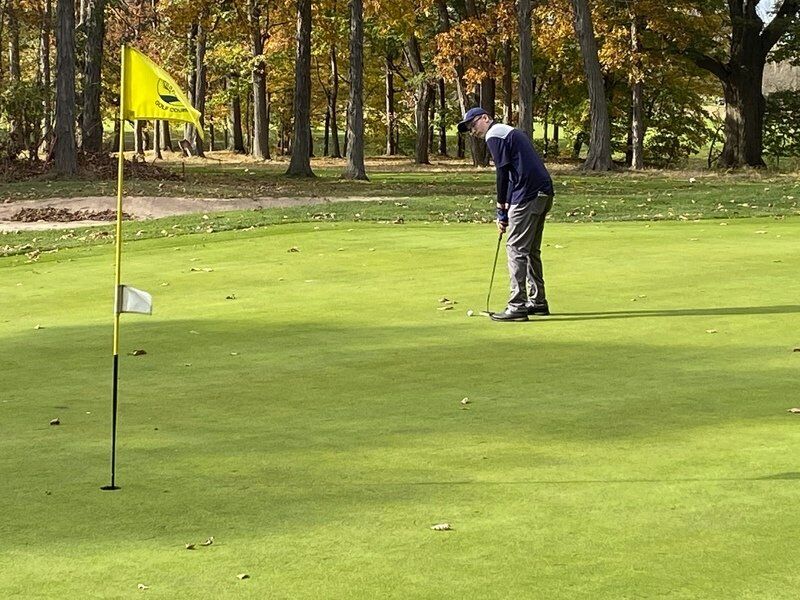 Khari Demos/StaffNewfane's Zach Murray lines up for a putt during the Niagara-Orleans League golf tournament, Saturday at Willowbrook Golf Course. Murray's Panthers would take second place honors in both the N-O tournament and the final league standings. 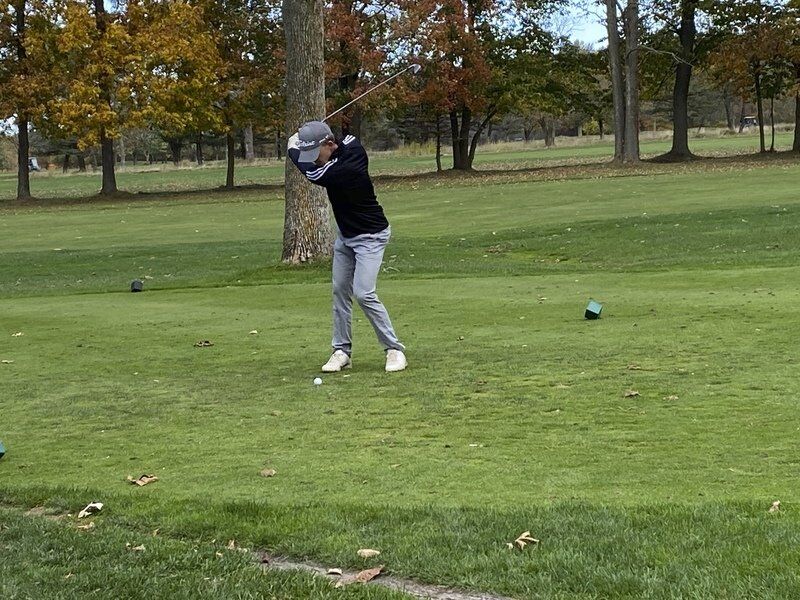 Khari Demos/StaffNewfane's Trevor Hescke lines up his driver during the Niagara-Orleans League golf tournament, Saturday at Willowbrook Golf Course. Hescke's Panthers finished second in the tournament, as well as second in the overall season standings.

Khari Demos/StaffWilson's Nathan Meyers lines up to chip in a putt, Saturday at Willowbrook Golf Course. Meyers finished second in the Niagara-Orleans League golf tournament, notching an 85 round and the No. 7 spot in league standings.

Khari Demos/StaffNewfane's Zach Murray lines up for a putt during the Niagara-Orleans League golf tournament, Saturday at Willowbrook Golf Course. Murray's Panthers would take second place honors in both the N-O tournament and the final league standings.

Khari Demos/StaffNewfane's Trevor Hescke lines up his driver during the Niagara-Orleans League golf tournament, Saturday at Willowbrook Golf Course. Hescke's Panthers finished second in the tournament, as well as second in the overall season standings.

LOCKPORT — As quickly as the Niagara-Orleans League golf season came, it has already concluded.

The N-O League wrapped up its golf season for the fall, as the league held its annual tournament Saturday at Willowbrook Golf Course. Unlike the Niagara Frontier League, the N-O got a full-season schedule in, as Akron (11-1, 11-1 N-O) swept with the regular season and tournament championships.

Akron was buoyed by Drew Romesser, Jack Klodzinski, Trace Hill and River White, as all four placed in the league's top 10 standings for the season and have qualified for the Section VI tournament.. Medina's Aiden Paul was tops in the league standings and the sophomore medaled with the league tournament's lowest score of 83.

The second lowest round on Saturday belonged to Wilson's Nathan Meyers, as the fellow sophomore logged an 85 for the event. Meyers came out hot on the north portion of the course, finishing with a 40-point performance through nine holes.

Like many of the top golfers in the event, Meyers was upset about not being able to compete in the 2019-20 Section VI championships after all spring sporting events were canceled due to the coronavirus pandemic. Although he's not anticipating a record-breaking effort there, the sophomore is glad he put himself in the position to even get back to sectionals.

"I played definitely more conservative on the south. I kind of had a couple bad holes, I hit a quad, and then a triple," said Meyers, who finished seventh in the league standings. "And then I four putted on the last hole, but those birdies made up for it, so ... an 85 is pretty good for me today."

Newfane's Sam Capen finished second in the league standings, as he closed out his season with an 88 round. He took advantage of the fact that his father, Michael, works at Willowbrook, so Sam spent his socially-distant summer getting in extra work.

It wasn't the way he envisioned playing in the tourney, but Sam is excited to get back after a lost sectional event last spring.

"I was hoping to do a little better but it worked out anyways, (I'm) still happy with how too," Capen said.

" ... Last year (in the N-O tournament) I didn't do too good. This year I did pretty bad I think for me. I just wanted to do good this year, so I practiced a lot over the fall and stuff, trying to get it better. I was trying to hit in the 70s but that didn't work out. ... I was looking forward to (sectionals) last year, I'm so happy we can hopefully have it this year. I'll try to work a lot in the offseason to shoot better there than today."

The lone girls golfer in attendance was the very accomplished McCarthy Lang from Royalton-Hartland. The senior finished with a 97 on the full 18, just four strokes behind the Rams' Carter Green for their top score in the tournament.

Often referred to as "Mac," Lang parred the first two holes of the day on the North before things got a bit treacherous. She started out slowly on the South too, but she was not held back for long as she closed out the back-nine stretch with a 46.

A 2019 Section VI NYSPHSAA rep, Lang can bring you into the mind of a high-level golfer. She broke down what was key in her mindset to be able to earn another trip to sectionals.

"I think it was not overthinking my shots. A lot about golf is mental," said Lang, who plays under her father, Mike, at Roy-Hart. "So I think kind of being able to relax and not think about it as much really helped me today.

Mac also talked about what it'd mean to her if she could earn another trip to the state tournament.

"I really hope so, that'd be a great experience for my last year. I went to states two years ago, so I could maybe have the chance to go again. I really hope they do have it," Lang said.

Wilson head coach Mark Kurtz is most exuberant about the kids being able to get a full season in before October ended. In addition to a topsy-turvy virtual school year, Kurtz knows how taxing it was for players and coaches to have three or four matches a week.

Kurtz felt that the kids were really just happy to be back out on the courses, though, especially being able to once again socialize with competitors from across the league.

One new piece added for the 2020 season was the tri-match system, where three different schools would compete in league matches at once, in order to speed up the season before the weather got out of control. This was one of Kurtz's favorite elements this fall and he believes it could work for the N-O moving forward.

"So I thought the tri-matches really were nice. I mean they got to play three in a group, instead of the four, " Kurtz said.

"So the matches really went along just as quick as a dual match. And again, I think the competition is great when there's three No. 1 guys golfing together, twos, threes, fours, all the way down. I think it just provides for a lot of good competition, and some really fun matches. And I think, as I told you, I think golf that's what it's about. It's just competition between one guy and another, so that's a lot of fun."