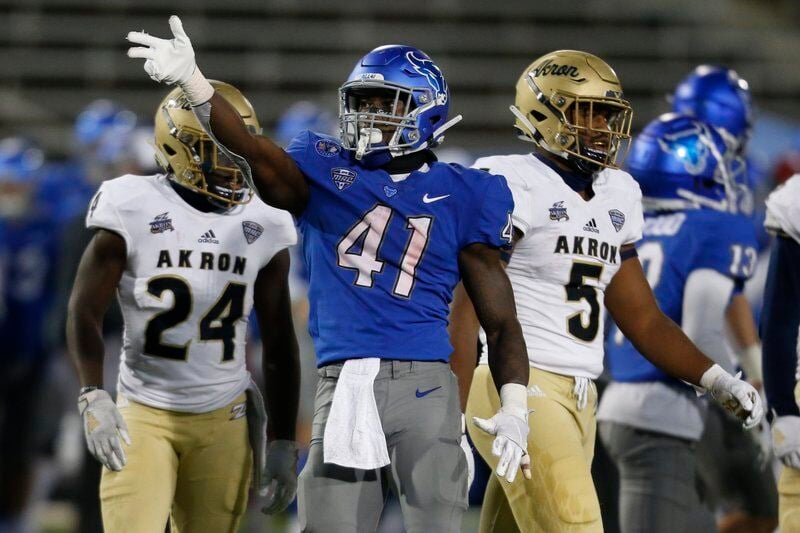 In this Dec. 12, 2020 file photo, Buffalo running back Kevin Marks Jr. (41) runs for a first down during a game against Akron at Alumni Stadium. 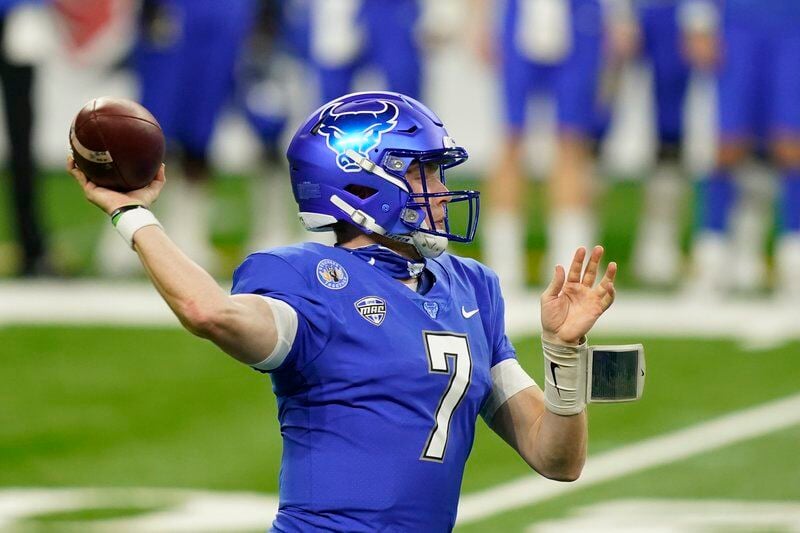 In this Dec. 18 file photo, Buffalo quarterback Kyle Vantrease throws during the first half of the Mid-American Conference championship game against Ball State in Detroit.

In this Dec. 12, 2020 file photo, Buffalo running back Kevin Marks Jr. (41) runs for a first down during a game against Akron at Alumni Stadium.

In this Dec. 18 file photo, Buffalo quarterback Kyle Vantrease throws during the first half of the Mid-American Conference championship game against Ball State in Detroit.

New coach Maurice Linguist brings a new energy to the beginning of a new chapter in University at Buffalo’s football story.

The best four-year stretch in UB history culminated with a record-breaking season in which the Bulls made their first appearance in the national rankings, ending up at 25th in the final AP poll after winning the Mid-American Conference East division and the Camellia Bowl to finish 6-1. Yet the Bulls believed they could make an even more fulfilling run in 2021, retaining experienced players at all but a few positions and with no changes to the coaching roster when they reconvened for spring practices.

UB’s script changed at the end of April when MAC coach of the year Lance Leipold and his top lieutenants left for Kansas, and a stream of talent followed into the transfer portal.

Kicking off the season tonight (7 p.m., ESPN3) at UB Stadium against sub-Division I Wagner, the Bulls boast 12 players with starting experience, notably quarterback Kyle Vantrease and running back Kevin Marks in the senior class, and five sixth-year graduates allowed another season of eligibility during the coronavirus pandemic. But that is at least a half dozen fewer returning starters than UB had before the coaching change, and new leadership brings new styles and systems that further disrupt continuity.

Enter the loquacious Linguist, the former Baylor cornerback rising from D-II Valdosta State to the Dallas Cowboys coaching staff with a stop in Buffalo assisting Jeff Quinn (2012-13), a rookie head coach at age 37. UB is promoting “Mo’ Excitement” under “Coach Mo,” and his enthusiasm has resonated with fans, alumni and former players, including NFL star Khalil Mack. Linguist was the most popular new face at a pep rally to start the semester.

“True Blue did an amazing job,” Linguist said at his weekly press conference. “I showed the video of our student body to our team the day after the pep rally to show them the support and love that they had from the students and the real excitement that is there.”

The talent disparity between an experienced bowl champion and struggling FCS program suggests the outcome of this opening game could be determined quickly. UB is favored by seven touchdowns against a Wagner team that was outscored 43-7 in two spring games.

UB visits Nebraska next weekend before hosting No. 22 Coastal Carolina on Sept. 18, but Linguist insists the Bulls are “laser focused” on their first opponent and not looking ahead on the schedule.

Playing in an empty UB Stadium last season, the Bulls are excited to have fans back in the stands and the opportunity to play a full schedule after a shortened season of restrictions.

“I think everybody plays a little bit better when you have your loved ones and people who support you out there,” Linguist said. “We can’t wait to see our student body out there cheering and getting loud and rowdy and creating an intimidating atmosphere.”