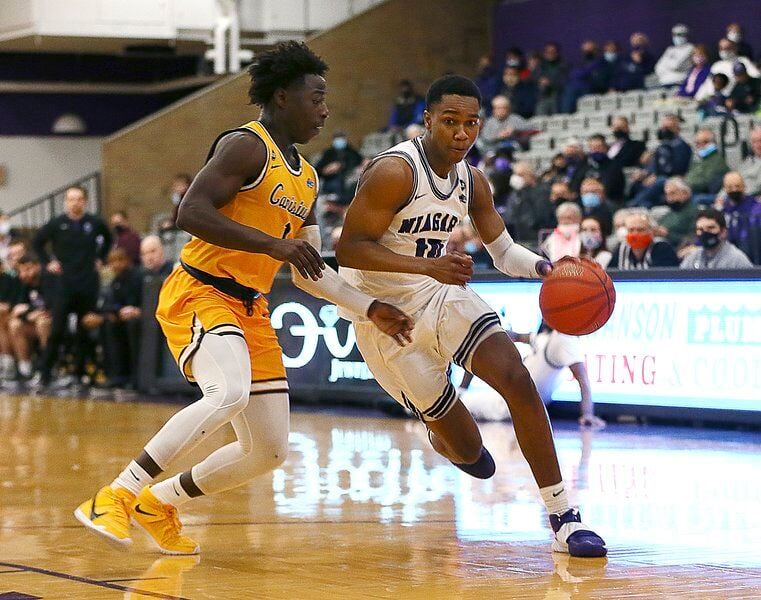 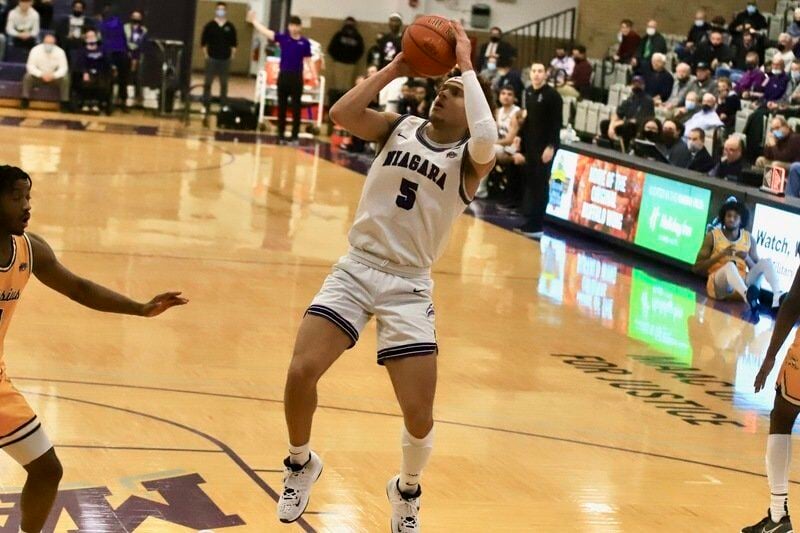 Paul Battson/contributorGraduate forward Jordan Cintron puts up a shot inside for Niagara during Thursday's home win over Canisius. Cintron had a 14-point, 11-rebound double-double for the Purple Eagles.

Paul Battson/contributorGraduate forward Jordan Cintron puts up a shot inside for Niagara during Thursday's home win over Canisius. Cintron had a 14-point, 11-rebound double-double for the Purple Eagles.

Four days after an eye injury sent him to the sidelines for most of the second half of a win over Quinnipiac, Niagara's senior all-conference guard went off, scoring a season-best 28 points to lead the Purple Eagles to a 68-58 win over rival Canisius on Thursday at the Gallagher Center.

The Metro Atlantic Athletic Conference's leading scorer netted 13 in the first half to keep his team afloat, then 15 more after break as it pulled away for a second straight win.

Hammond went 9 of 16 from the floor, 3 of 7 from deep and 7 of 8 from the free throw line. He chipped in five rebounds and two steals for good measure. The NU bench and most of the fans as the Gallagher Center gave him a standing ovation as he approached the charity stripe with 23 seconds left and a chance to get to 30, but he missed the front end of a bonus.

The Purple Eagles trailed 31-29 at half, with a late Hammond turnover allowing Canisius the go-ahead layup just before the buzzer.

The teams traded leads for 8 minutes of the second before Niagara found another level. It held the Golden Griffins scoreless for a span of nearly 5 minutes, taking the lead for good with a 10-0 run.

The Griffs stopped the bleeding with a couple of makes, but Hammond emphatically put them away with a jumper, a steal and a 3-pointer that brought out Greg Paulus' inner Duke Blue Devil, as Niagara's coach gave the Frank and Barbara Layden Court a two-handed slap in excitement.

"I thought defensive effort was outstanding," Paulus said. "Just really proud of the different guys that stepped in there to make enough plays for us to get the win."

The Griffs feasted on the glass during the first half, going plus-6 over the first 20 minutes. But Niagara addressed that and then some in the second, winning the battle of the boards, 17-13.

"We valued each possession," said NU graduate forward Jordan Cintron, who had a game-high 11 rebounds to go with 14 points and four assists.

"It was a tough game. It was a physical game," said Canisius senior guard Ahamadou Fofana, who had 11 points and five assists. "And they sustained it longer than we did, and that was the game right there. They just sustained that fight for longer than we did."

Including Sunday, Niagara (7-7, 2-3 MAAC) now has back-to-back wins over Division I opponents for the first time since November. It couldn't have picked a better time to get hot, with four more conference games over the next 10 days. First up is Sunday at Rick Pitino's defending champion Iona Gaels (12-3, 4-0), who beat the Purple Eagles by six in last year's MAAC tournament.

Canisius (5-10, 1-3) had won three straight going back to a Dec. 18 upset of Buffalo at KeyBank Center. It had a 20-day period between games before beating Quinnipiac on Tuesday. Like Niagara, the Griffs play four games over the next 10 days, starting Sunday at Manhattan.

NOTES: There were no Battle of the Bridge men's basketball games last season due to COVID-19. In Paulus' first season, 2019-20, Niagara and Canisius split the series. Overall, Niagara has won 7 of the last 9 against its local rival. ... Junior guard Noah Thomasson added 13 points on 6-of-8 shooting for NU. Jordan Henderson led Canisius with 15. ... Niagara is down an assistant coach, as Brett Ervin resigned from his post "to take an opportunity outside of coaching that he felt was best for him and his family," according to an NU spokesperson.

The visiting Stags used a 24-13 fourth quarter to pull out an 81-64 victory Friday afternoon over Niagara at the Gallagher Center.