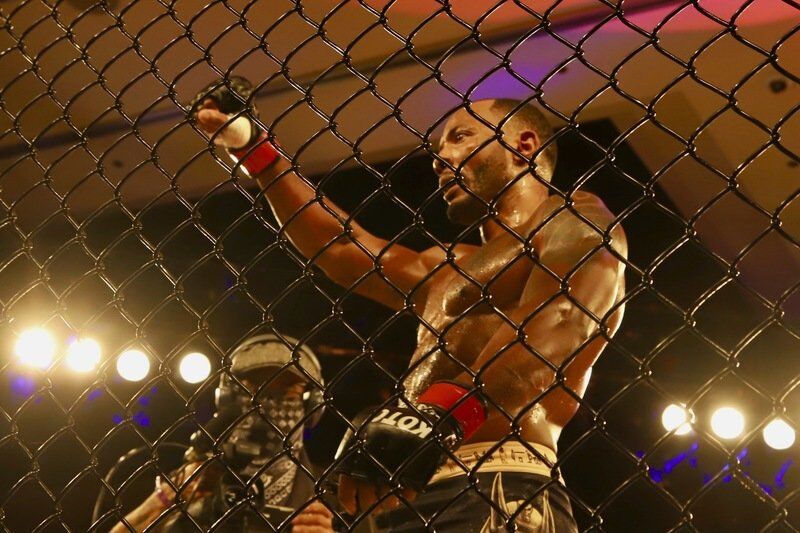 Paul Battson/ContributorLockport's Joe Taylor celebrates after knocking out George Clynes in the fourth round to win the King of the Cage middleweight championship on Saturday at Seneca Niagara Casino. 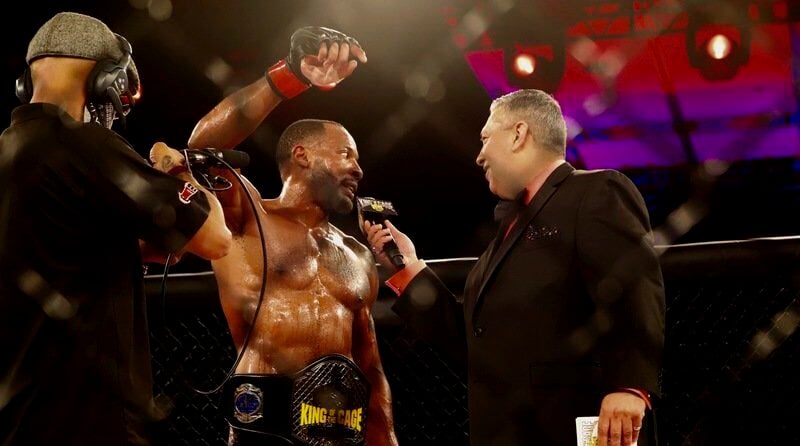 Paul Battson/ContributorLockport native Joe Taylor is interviewed after defeating George Clynes in a fourth-round knockout to win the King of the Cage middleweight championship on Saturday at Seneca Niagara Casino.

Paul Battson/ContributorLockport's Joe Taylor celebrates after knocking out George Clynes in the fourth round to win the King of the Cage middleweight championship on Saturday at Seneca Niagara Casino.

Paul Battson/ContributorLockport native Joe Taylor is interviewed after defeating George Clynes in a fourth-round knockout to win the King of the Cage middleweight championship on Saturday at Seneca Niagara Casino.

NIAGARA FALLS — Joe Taylor waltzed to the cage wearing a Stefon Diggs jersey, but it was the stone-faced demeanor he wore that proved to be the precursor for what was to come.

Taylor’s expression never changed from the time he came through the curtain to the final bell. Not when he entered the cage to flaunt in front of the crowd, not in the midst of the fight and not even when he knocked out George Clynes with one second left in the fourth round to win in the King of the Cage middleweight world championship on Saturday at Seneca Niagara Casino Resort & Casino.

The Lockport resident was deliberate all night and there was nothing that would change his game plan. As the crowd grew louder with chants to “knock this bum out,” Taylor maintained his strategy, before an uppercut bloodied Clynes’ lip and he mounted his staggered opponent for the final knockout blows.

“I was hesitant because I was concerned with his takedown,” Taylor said. “... In the middle of the third round, I started landing different shots other than the jab or crossover. I started throwing more of a right uppercut and left uppercut.”

In the early moments of the bout, it appeared the 37-year-old was a bit tentative in first mixed martial arts match in three years. He spent most of the first round dancing around, avoiding attempted strikes from Clynes. But it quickly became apparent it was not rust or nerves. It was strategic.

Taylor’s plan was to work the jab, and although he had multiple flurries throughout the match, he could not find the knockout blow when Clynes staggered. Still, Taylor kept working the jab, as his corner team shouted, “Don’t look for the big shot. Keep landing the jab on the tip of (Clynes’) nose. Just where he likes it.”

Finally, Taylor could feel the 39-year-old Clynes begin to tire in the third round. In the fourth, Taylor quickened the pace and cornered Clynes, delivering an uppercut that drew blood for the first time in the match. Moments later, the fight was over and he was signaling his victory to a pro-Taylor crowd.

“We started the fourth round, I landed some good shots and I could see he was getting more tired,” Taylor said. “It led me to land more shots on him. … Once I saw him start to fatigue, I knew he was more tired than me. I heard my coaches say to turn it up more and I started to turn it up more. I wasn’t as tired as him, but I was tired.”

Taylor improved to 4-0 in his MMA career and added another belt to a collection that already featured the World Kickboxing Association North American and Ground Force cruiserweight championships.

He left the cage without visible bumps, bruises or cuts, but Taylor was clutching his right arm, which doctors diagnosed as a fractured forearm — occurring in the second round — in his post-fight medical exam.

Notorious for fighting on quick turnarounds, Taylor is scheduled to compete for another kickboxing title at Lockport’s Kenan Center in December, with hopes of two MMA fights in 2022 after signing a four-fight deal with King of the Cage.

Although Taylor desires to compete in two months, he refuses to do so at the expense of his health. Taylor described training camp for the Clynes fight as “tough,” after contracting COVID-19 23 days before the fight. He had mild symptoms for three days but missed two weeks of training time.

“If we have to postpone that fight, then we’ll postpone it. Health comes first,” Taylor said. “I have a great team and I trust the guys that I train with. I’m 37 and I have one year left. One more year.”